Why has Japan been cozying up to Vladimir Putin?

This article, “Why has Japan been cozying up to Vladimir Putin?” originally was published in Newsweek on May 25, 2016. View it on the Newsweek website here. 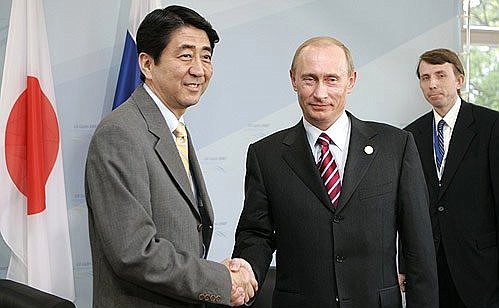 In early May, Japanese Prime Minister Shinzo Abe visited Russian President Vladimir Putin in Sochi, Russia. It was the 13th time the two leaders have met since 2013, when Abe made the first official visit by a Japanese premier to Russia in a decade. But when Abe has only held seven meetings with his U.S. counterpart, why is he meeting Putin so often?

Abe’s major objective is to resolve the lingering territorial dispute with Russia. Known as the Northern Territories in Japan, the four disputed islands currently belong to Russia, where they are known as the Southern Kuriles. Since becoming premier, Abe has worked hard to resolve a number of issues left over from the aftermath of World War II. The territorial dispute with Russia is one of these. It is enticing for Abe because Moscow has been willing to discuss the dispute in the past. Importantly, Putin has said that a compromise solution “can and will be found.”

However, it is very unlikely that a compromise acceptable to both countries can be achieved. Moscow considers the islands legitimately seized from Japan during the course of the war. Japan, in its efforts to regain the islands, has pitched a number of compromise plans through the years—none have been accepted by Moscow. As long as this remains true, the two are prevented from signing a peace treaty. In turn, growth in bilateral ties will remain underdeveloped. There are two areas, in particular, that would benefit from closer ties.

[perfectpullquote align=”full” cite=”” link=”” color=”” class=”” size=””]It is very unlikely that a compromise acceptable to both countries can be achieved. Moscow considers the islands legitimately seized from Japan during the course of the war. Japan, in its efforts to regain the islands, has pitched a number of compromise plans through the years—none have been accepted by Moscow. [/perfectpullquote]

Energy-poor Japan wants to diversify its oil and gas partners; at the same time, Russia needs new foreign investors following plummeting prices in oil and other commodities. While there is some level of bilateral economic exchange already, including Japanese investments in energy projects on Sakhalin, trade remains rather minor. This is a function not only of the lack of priority by both business communities to push for more opportunities, but Japanese businesses and banks are not in a rush to invest in the Russian economy due to its structural weaknesses within. Some hope that improved bilateral relations could boost economic ties.

The same is true for geopolitical ties. Russia’s Asia-Pacific engagement is comparatively thin compared to its European engagement. It has essentially one partner: China. Putin is said to have become concerned that China is increasing its business presence in the Far East and is wary of China’s military rise. This plays well with Japan, which is locked in an increasingly tense showdown with China in the maritime domain. Improved Russo-Japan ties help address both concerns. Abe can give Putin options to Asian partners so that Moscow does not have to maintain a heavy dependence on China. By extension, this can help drive a wedge—albeit a small one—in Russo-China ties, thereby adding another layer of complexity to Beijing’s strategic calculations.

But the potential benefits of Abe’s active pursuit of a constructive relationship with Putin risks policy differences with Washington. Washington maintains that economic sanctions on Russia remain in place until Russia observes a ceasefire with Ukraine. Unity of effort among U.S. allies is considered crucial. Although Japan has faithfully implemented the G-7 sanctions, Russia would seek to use any deal with Japan to weaken them and to send a message of “business as usual.”

Fortunately for Abe, the potential for a deleterious effect on U.S.-Japan relations is limited. Tokyo understands the importance of its relations with Washington. And Washington understands the importance of the lost territory issue for Tokyo. Importantly, communication between Washington and Tokyo on these issues is quite good. There is room for Japan to pursue an independent foreign policy without risking its critical alliance relationship, no matter how quixotic it may appear at times to Washington.

This is because the U.S. and Japan understand the likelihood that Russia will deliver an agreement is quite small. Moscow shows no serious indication that it is willing to compromise. After all, Moscow has singled the territory out for significant socio-economic development and continues to build new compounds for its troops stationed on two of the islands. Prime Minister Dmitry Medvedev’s statement that Russian officials “visited, visit and will visit” the islands casts further doubt on Moscow’s seriousness.

Nobody expected the April Sochi meeting to mark any breakthrough to settle the territorial dispute. While Abe promised an unspecified “new approach” that would be “free of any past ideas,” he provided no specifics. But it is difficult not to view the chances of some breakthrough on the Northern Territories with skepticism given Moscow’s traditional intransigence and Abe’s weak negotiating hand. Abe has made tremendous gains in other realms of Japanese foreign policy and resolving issues left over from Japan’s mistaken march to empire. But until Moscow shows a considerable degree of flexibility, there is a risk that Abe will come away as yet another Japanese premier who is unable to regain Japan’s lost Northern Territories.