The U.S. Military Laydown On Guam: Progress Amid Challenges 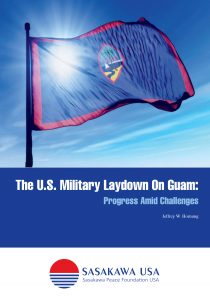 dependents, and five thousand Department of Defense (DOD) civilian employees. Since 1996, the two countries have been working to relocate personnel and functions at Marine Corps Air Station Futenma (hereafter Futenma) to a replacement facility. This political arrangement originated out of a need to reduce the local community’s concern over issues—such as noise, pollution, and crime—that emerged as the community grew around the military base. Most media and scholarly attention has focused on the challenges associated with Okinawa, including local protests, feasibility, costs, alternative options, and legal actions. While these challenges have overshadowed progress, they have also dramatically diminished attention on Guam, which is set to welcome five thousand troops from Okinawa. This is surprising, given that the Guam portion of the relocation is part of a much larger realignment of forces in the Asia-Pacific. Former U.S. Assistant Secretary for the Navy B.J. Penn has called the action on Guam “the largest project that the Department of Defense has ever attempted.”

To rectify this situation, this report focuses on the activities taking place on Guam over the past decade, including the issues at stake, historical development, challenges, and local community concerns. The report stays at the policy level without delving into questions of U.S. force posture or troop readiness. In light of the many political, economic, and cultural issues regarding the realignment plan, this report’s conclusion argues that while the laydown plan on Guam is not perfect, the DOD has demonstrated its willingness to listen to valid local concerns and adjust the laydown plan substantially. Progress is occurring on Guam, but amid many ongoing challenges.