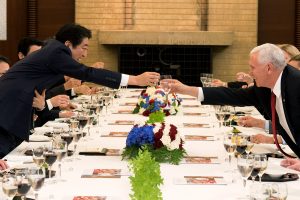 When Japanese Prime Minister Shinzo Abe met with U.S. President Donald Trump in February, they agreed to convene a bilateral economic dialogue – led by U.S. Vice President Michael Pence and Japanese Deputy Prime Minister and Finance Minister Taro Aso – to “[explore] cooperation across sectors that promote mutual economic benefits to the United States and Japan.” This framework would enable the two governments to draft a new economic agenda following U.S. withdrawal from the Trans-Pacific Partnership (TPP), the 12-country trade agreement that had dominated the bilateral agenda since Japan entered TPP negotiations in March 2013.

Despite Tokyo’s fears that the dialogue would lead to a new round of trade disputes, the first meeting, which was held on April 18, was cordial. Both Aso and Pence suggested that the two governments seek opportunities for “win-win” economic cooperation, and they established working-level groups in three areas – trade and investment rules, cooperation on economic and structural policies, and sectoral cooperation – ahead of a second round of talks later in 2017.

The friendly discussions, however, obscured the extent to which Japan and the United States are pursuing conflicting visions of the U.S.-Japan economic relationship. Ahead of the dialogue, it was apparent that the Trump administration wants to pursue a bilateral free trade agreement (FTA) with Japan. Commerce Secretary Wilbur Ross, for example, suggested that a U.S.-Japan FTA was “a very high priority,” perhaps second only to renegotiating the North American Free Trade Agreement (NAFTA). Ahead of the first Aso-Pence dialogue on April 18, as well as side meetings between Ross and Japanese cabinet officials, U.S. administration officials reportedly sought to use the dialogue to lay the groundwork for subsequent talks on an FTA.