The U.S.-Japan Alliance to 2030: Power and Principle

The Commission on the Future of the Alliance
February 29, 2016 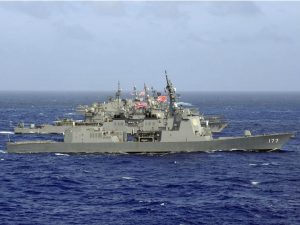 In 2013, the Sasakawa Peace Foundation and the Center for Strategic and International Studies established the Commission on the Future of the Alliance, a bilateral commission of distinguished policymakers and scholars, to develop a shared vision for Asia and the U.S.-Japan Alliance through 2030. Co-chaired by Richard Armitage, John Hamre, and Ryozo Kato, the Commission chartered research and met six times over three years on the challenges and opportunities for the Alliance going forward.

The Commission notes that the U.S.-Japan Alliance has helped to provide security and prosperity to the Asia-Pacific region and the broader international community for more than half a century. Today, the U.S.-Japan Alliance is as strong as it has been at any time during its existence. The Commission believes the Alliance will need all of its current strength and more, since the international security environment over the next 15 years will be as challenging and uncertain as any the United States and Japan have faced. In addition to challenges from a rising China and aggrieved Russia, the United States and Japan both have vital interests in the Middle East, which is an increasingly unstable and violent region. Global challenges such as terrorism, proliferation of nuclear technology and weapons, and climate change will also require wise policy and firm action.

The strategic environment in this period will include intensified competition for power and influence across ideological, economic, and security spheres between liberal democracies, including the United States and Japan, on the one hand, and ambitious and aggrieved authoritarian regimes, on the other. The Commission believes that this competition need not—and in fact is unlikely to—result in war; moreover, there are many areas in which countries from both groups can and will increase cooperation. A successful strategy should shape the environment by encouraging responsible behavior and imposing costs for destabilizing activities. The United States and Japan will therefore have to build up their own power, and use it wisely and firmly, to preserve a world order that favors their values.

The Commission believes that the United States and Japan must develop a shared vision of the world they seek in the next 15 years. The Commission proposes that this vision should include a world in 2030 in which all nations are secure, peaceful, prosperous, and free. Working to build this world, the United States and Japan will make national contributions that reflect their respective capabilities, legal obligations, and traditions, but they will always be united on their goals. The United States and Japan are global powers with global responsibilities, but their Alliance will continue to focus as it always has on the peace and prosperity of the Asia-Pacific region and the maintenance of a favorable balance of power.

The United States and Japan, as major economic powers and democracies, should continually stress two foundational pillars of the Alliance to achieve their shared vision. First, the United States and Japan need to strengthen and sustain public support in both countries for active international leadership, using the full range of policy tools (including military capabilities when necessary) to achieve their vision. The Commission recognizes that military power cannot be the sole or even the primary instrument of national security policy. However, the potential employment of military force is often necessary to support diplomacy, deter aggression, and keep the peace. The utilization of the armed forces, whether in the form of advisors, peacekeepers, or combat units, will remain essential to deal with future threats to peace and security. The United States and Japan must have fully-funded, modern, and highly capable military forces, and they must be willing to employ them in support of the peaceful, secure, prosperous, and free world that they seek. Leaders in both countries have a responsibility to explain these realities to their publics.

Second, in order to provide the foundation for the policies outlined in this report, both countries need to take action to support their economies to resume economic growth in the case of Japan and to sustain recovery from the recession of 2008 in the case of the United States. Both countries have the fiscal and monetary policy tools necessary to stimulate growth, but both must also undertake structural changes that require continuing political attention. Both countries must also improve their educational systems to create the digital workforce of the future.

The primary geopolitical test for the Alliance is China’s rise, which requires that the two countries to develop a coordinated China strategy.

The contested and uncertain future strategic environment will require action in two major areas: first, updating the current U.S.-Japan strategy to meet the more competitive international environment, especially the challenge from China, through a coordinated China strategy; and second, increasing the credibility and effectiveness of the Alliance through measures for deepening, broadening, and sustaining the Alliance.

The primary geopolitical test for the Alliance is China’s rise, which requires that the two countries to develop a coordinated China strategy. The Commission’s baseline projection for China over the next 15 years is that Beijing will continue to grow more powerful and somewhat more aggressive than in the past, but it does not rule out more significant discontinuities or a wide variety of different future scenarios. Under such circumstances, the United States and Japan cannot base Alliance strategy simply on a binary path of encouraging the pursuit of common economic and diplomatic interests with Beijing while maintaining military deterrence in case China chooses a more aggressive path. This approach will be particularly ineffective in an environment in which China is seeking to alter the status quo through “grey zone” coercion that neither undermines economic cooperation nor triggers military confrontation. While the United States and Japan are limited in their ability to influence the future of China itself, much more can and should be done to reinforce those institutions and arrangements that have underpinned the prosperous regional and global order while seeking ways to cooperate with China within that framework. The coordinated strategy for China that the Commission proposes includes four components: better-integrated American and Japanese policy towards China; realistic economic relations with China; stronger combined military capability; and more effective counters to Chinese aggression in the East and South China Seas.

To deepen the Alliance and address increasingly complex security challenges, the United States and Japan will have to develop a more integrated Alliance capable of making rapid decisions. In the Commission’s view, five steps are necessary: increasing strategic dialogue and coordination across the two governments; establishing and substantiating the Alliance Coordination Mechanism; updating command and control mechanisms; further strengthening interoperability between Japanese and U.S. forces; and promoting defense industrial cooperation.

The U.S.-Japan Alliance has an admirable past and a bright future. The recommendations proposed by the Commission are intended to help the Alliance live up to its potential and manage emerging challenges in the decades ahead.

To broaden the Alliance, the Commission recommends that the United States and Japan at least coordinate, and if possible integrate, their policies and actions elsewhere in Asia and beyond. Doing so can increase the effectiveness of both Allies in achieving shared objectives and can support their vision of the world in 2030. The Commission makes specific recommendations in a number of geographic areas (including the Korean Peninsula, Southeast Asia, Russia and the Arctic, and Australia and India) as well as functional areas (such as counterterrorism, cybersecurity, space, climate change, the environment, energy, and the United Nations).

To sustain the Alliance and maintain public support, it will be important to continue to solve, or even better to anticipate, basing issues and to establish basing arrangements that minimize areas of friction. In the future, American military access in Japan should be carried out as a tenant on Japanese-flagged bases where Japanese forces are also stationed. Both allies will need to take significant steps to achieve this goal, but it should inform all decisions on bases going forward. The commission proposes four elements to better sustain the Alliance and to gain stronger public support: building on shared common values; accelerating the relocation of U.S. forces on Okinawa; addressing environmental and legal issues related to U.S. forces stationed in Japan; and building human resources as a foundation for long-term ties.

The U.S.-Japan Alliance has an admirable past and a bright future. The recommendations proposed by the Commission are intended to help the Alliance live up to its potential and manage emerging challenges in the decades ahead. The Commission concludes that the next 15 years will be one of the most testing times in the entire history of the Alliance. The United States and Japan do not seek to contain China’s growing economic and political ties across Asia, only to offer an attractive alternative and the opportunity for states to make their choices freely.