Pacific Trident III: The Strengths and Weaknesses of the US Alliance System under Gray Zone Operations

“What have I come here to learn?” This was the question at the forefront of my mind as I entered a modern, glassy, corporate site on a cold, wet Norfolk day in early February. The large room was cavernous and approximated my vision of a secure control center, with busy people at consoles in a pit facing three massive screens at the front, and a raised deck to their rear, housing an operations control center. I thought of the 1983 film, War Games, and, in a sense, that was an appropriate parallel as I was attending a tabletop exercise, “Pacific Trident III,” created and run by Sasakawa Peace Foundation USA (Sasakawa USA), a think tank based in Washington D.C. 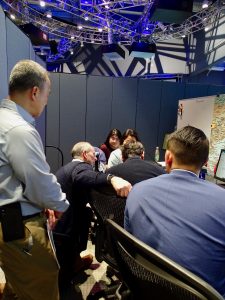 The exercise itself – the set-up – was actually quite interesting for a mid-career East Asia analyst like myself. It was not the usual North Korea crisis or Taiwan-China crisis, but rather a realistic combination of two different scenarios. The starting point was for the China team to 1) expand Chinese influence and authority in East Asia and 2) drive wedges between the United States and its allies. The China team began the game by persuading the North Koreans to “initiate” a minor but ambiguous provocation – a small special operations ground attack on a U.S. base in the South – while China simultaneously landed “humanitarian aid workers” on a Taiwanese-administered island in the South China Sea in the wake of a typhoon.

It was a clever and interesting set-up that confounded the United States and allied players in the initial stages of the game in two fundamental ways. First, it utilized two different crises at the same time, challenging the United States and allied players as to which was the “real” crisis, or which merited prioritization. Second, both crises involved actors using gray zone tactics (operations other than war) to achieve their objectives. In many ways, the fact that there were two gray zone operations at the same time showed the alliance system’s strengths and exposed some of its weaknesses. While I think there is always hesitation to openly report such weaknesses – lest we point out vulnerabilities to our allies – the point of such games is to instruct practitioners on what needs improvement and fixing and what does not.

As an “observer” in the game, I could wander the floor at any time and eavesdrop on meetings between the different clusters of people who represented national teams. Looking around the United States, Japan, and South Korea teams, I recognized some extremely senior names and faces. Most were recently retired – some were military and others, civilians. All were extremely well-respected and experienced. This in itself was novel for me as I have experienced multiple “games” with students and mid-career security practitioners. This was my first exercise with decision makers who had actually held senior policy positions, and this afforded it a significant level of realism. At one point, a former U.S. Chief of Naval Operations gave an impressive briefing on U.S. assets in the area to his team and allies.

The post-tabletop exercise analysis that was written by Rear Admiral Michael McDevitt, USN (Ret.) should be read by every American security practitioner working in the Indo-Pacific, on our alliances, and on China. The report is instructive, because the superb set-up produced an interesting outcome and I think Admiral McDevitt has turned these insights into a sharp bundle of policy recommendations.

First, the outcome: (You should skip to the next paragraph if you do not want spoilers). As the game wrapped up on day three, it was clear that both sides had achieved around half of their strategic objectives. The United States and its allies had rather swiftly realized that the South China Sea issue should take priority and had worked with South Korea to deal with the North’s provocation peacefully, while quickly working with other allies on the Taiwan issue. The eventual outcome was a unified alliance position, signaled by a multi-force flotilla transiting the Taiwan Strait. The fact that the South Korean Navy took part, as well as Taiwan’s own naval forces, was a serious accomplishment for the U.S. negotiator. Likewise, the Chinese gambit was somewhat successful. While they failed to drive a political wedge between the United States and its allies, they did come out with new territory in the South China Sea, weakening the domestic support of the government in Taipei, and having shown that gray zone operations can pay off for Beijing domestically. They did commit the PRC to increasing economic support to North Korea– payoff for the provocation – so this might be construed as a long-term and onerous price for short-term, limited gains. 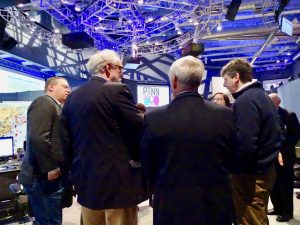 Looking at the outcome, the report recommendations are serious and thought-provoking. At the risk of hyperbole, I think they are some of the most realistic and specific recommendations – albeit in an out-of-the-box way – that I have read. Most policy papers or think tank reports on the South China Sea tend to give fuzzy recommendations, such as “continue to deter China, while engaging closely with stakeholders”, or similarly vague exhortations. McDevitt challenges many U.S. assumptions – and in a good way – in his recommendations. There are quite a few, so I will deal with them in terms of their function. The first two involve expanding the U.S.-Japan Alliance Coordination Mechanism (created to great effect in the 2015 Guidelines) to not only South Korea but Taiwan as well. McDevitt acknowledges the political difficulties in attaching these two to the ACM, but he notes that the groundwork could be prepared for the quick resurrecting in a contingency. Smart.

The second recommendation is really interesting and would require a major re-think of the U.S. position on territorial claims in the South China Sea. It would involve the United States invoking the legal principle of uti possidetis, meaning that, absent any agreement to the contrary, every state would be allowed the territory that it already has. While Beijing would of course reject this, it would be a neat solution for ASEAN claimants and resolve the overlapping claims in the Spratly Islands. Acknowledging that this is both revolutionary and politically bold for regional states, I nevertheless commend the Rear Admiral for his willingness to rethink our fundamental policy assumptions. Finally, he makes a series of recommendations that I believe would remove the unhelpful ambiguity in the U.S. position, and extend formal commitments to the claims of Taiwan, the Philippines, Vietnam, and Malaysia, if those states so desired. Again, a real shift, but one that is designed to fix problems identified in the exercise.

Did I learn anything? The success or failure of any tabletop exercise is less in the outcome, and more in the state-of-play, the post-analysis of that play, and the real-world strengths and vulnerabilities highlighted by that play. The Sasakawa USA TTX in Norfolk showed us that the U.S. alliance system is strong when pushed, can resist aggression from multiple sides, and can quickly adjust to collective strategizing. It also showed that certain gray zone operations can stay Washington’s hand and, in my own opinion, reveal a willingness for U.S. policymakers to prioritize tension-reduction at the expense of all other factors, including our allies’ interests. Given that the PRC was ordered to avoid a U.S. military confrontation at all costs, it was rather unfortunate that the U.S. team never once threatened the use of military assets in its negotiations with Beijing. It would have won them the game immediately.

However, these are merely my own reflections and certainly many others in the tabletop exercise will have come away with different ones – no less exciting and intriguing – providing the community of security practitioners with a strong rationale for continuing such tabletops. As we do, it is important to remember that they are only meant to be instructive for policymakers, prompting open thinking under crisis conditions. They are not meant to predict real events or create actual plans, though they may indirectly lead to that. They simply open our minds to a new realm of possibilities.

With that in mind, it only leaves for me to invoke Joshua – the supercomputer from War Games – and ask, “Shall we play a game?” 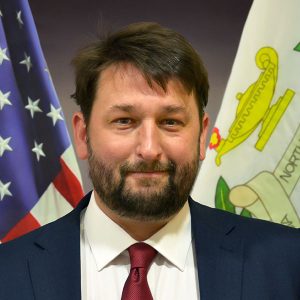 Dr. John Hemmings joined the Daniel K. Inouye Asia-Pacific Center for Security Studies (DKI APCSS) in July 2019 as an Associate Professor.  His areas of focus include Northeast Asian security, Japanese defense policy, the Indo-Pacific concept, alliance theory, and U.S. alliances. He takes a special interest in 5G and national security. In addition, Dr. Hemmings holds adjunct fellowships at CSIS and Pacific Forum. Dr. Hemmings regularly writes and comments for the news media on foreign policy issues, writes for academic journals, and has been called to give testimony to the UK’s Parliamentary Defence Committee.

He writes in his own capacity and his views do not represent an official position of the U.S. Government or Department of Defense.