Hideshi Tokuchi is a Distinguished Non-Resident Fellow at Sasakawa USA. In this Analysis, he writes about the Pacific Island region and its position in the national interests of a number of major and regional powers, including Japan, China, Australia, and the United States. Tokuchi looks at the challenges and opportunities for the region as its influence evolves and how Japan and the United States can cooperate with the region on their shared vision for a Free and Open Indo-Pacific. 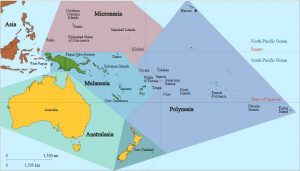 Since the 1980s, the world has been accustomed to using the term “Asia-Pacific.” As a geographical concept, it covers a large part of the world leading the economic growth of this planet. Those who live there now are increasingly conscious that they belong to the Asia-Pacific region. Their sense of community has grown, no matter whether they live in countries that are littorals of the Pacific or not.

One main reason for our use of the term “Asia-Pacific” was to indicate that the United States is integrated into the Pacific and to East Asia. Today, the United States is self-conscious that it is a Pacific power. In fact, in November 2011, when U.S. President Barak Obama visited Australia, he stated in his remarks to the Australian Parliament, “The United States has been, and always will be, a Pacific nation.”[1] More recently in June 2019, the then U.S. Acting Secretary of Defense Patrick Shanahan said in his speech at the IISS Shangri-La Dialogue, “The United States has a natural presence here: as Secretary Mattis said from this podium last year, we are a Pacific nation.”[2]  Thus, the term “Asia-Pacific” region is consistent with this approach. Also, Australia, a staunch ally of the United States in the region is more inclined to be integrated into Asia. New Zealand is coming back to the U.S. alliance network and, along with Australia, remains a part of the Five Eyes community. While we do not overlook the importance of these two countries for the regional security, when we defined the “Asia-Pacific” concept we often overlooked the other small nations in Oceania.

Today, a new nomenclature, “Indo-Pacific,” is rapidly replacing the term “Asia-Pacific,” although its focus is more westward. While there is no unified and clear geographic definition of the new term, the focus is mainly on the Indian Ocean. For example, if you look at the region from India’s perspective, the scope of the Indo-Pacific often seems to stop at the western Pacific. Moreover, the term “Indo-Pacific” literally connects the two oceans and geographically the two oceans are connected by the South China Sea, and accordingly the South China Sea seems a focal point of the new term. The Pacific island nations were not clearly included into the “Indo-Pacific” scope until recently.

Today, the Pacific Island region is where national interests of a number of major powers are involved. Powerful neighbors, i.e. Australia and New Zealand; powers with a historical background of relations, i.e. Japan and the United States, in addition to the UK and France have been deeply involved. Then, the region has become a venue for the competition for a diplomatic relationship between Taiwan and China.[2] The Pacific island region is being more integrated into the Indo-Pacific context. In fact, U.S. Vice-President Mike Pence said in his speech at the Hudson Institute in October 2018, “To advance our vision of a free and open Indo-Pacific, we’re building new and stronger bonds with nations that share our values, across the region–from India to Samoa (Italic added).”[3] More recently, Acting Defense Secretary Shanahan said in his Shangri-La speech, “I appreciate the important role the Freely Associated States play in enforcing sanctions against North Korea, upholding a free and open Indo-Pacific, and enabling U.S. regional presence.”[4]

China’s influence in the Pacific Island region is growing. Economic aid, cultural exchange, presence of Chinese expatriates, and infrastructure investments—these are the main tools of Chinese operations. The top donor to this region remains Australia. The second and third biggest donors are China and New Zealand. The amount of aid from these two countries is roughly one sixth the amounts Australia donated, but the amount by Australia is declining,[5] and in Fiji for example, the amount of aid from China is higher than that from Australia.[6] For another example, although there are some countries in the region, such as Samoa and the Cook Islands, managing loans from China well, there are some other countries, such as Tonga, which have a significant debt problem with China.[7] Cultural exchanges include one Confucius Institute in Fiji, one Confucius Classroom in Vanuatu, one Confucius Classroom also in the Cook Islands, one Confucius Institute in Samoa and two Confucius Institutes in Papua New Guinea.[8] In terms of Chinese expatriates, twenty thousand people migrated to Fiji and ten thousand in Papua New Guinea out of total seventy thousands in the Pacific Island region.[9] China’s infrastructure investment in the region includes port facilities in Fiji, Papua New Guinea, and Vanuatu, on which there is a growing concern about the potential for China’s military use.

China’s three main motives are considered to be the following.  Firstly, China is trying to decrease Taiwan’s international space. Taiwan maintains diplomatic relations with seventeen countries in the world, out of which six are Pacific island nations.

Secondly, China is trying to pursue its maritime interests, particularly fishery interests. The total EEZ of the Pacific Island nations is four times as large as Japan’s.  Fishing resources in waters near the coast of China have been depleted, and the Chinese have to depend more on fishing farther from home.

Lastly, geopolitical calculations are among China’s motives.[10] As mentioned earlier, the Pacific Island nations are located on the southern flank of INDO-PACOM. The geography of these nations is instrumental to complicating operations of U.S. military forces.

[2] Masaaki Yatsuzuka, “Chugoku-no taiheiyou-shokoku-eno shinshutsu-to ‘ittai-ichiro’ koso [China’s advancement to the Pacific Island nations and its ‘One Belt One Road’ Initiative,]” NIDS Commentary, No. 73, May 25, 2018, p. 4.

[3] “Remarks delivered by President Mike Pence on the administration’s policy towards China at Hudson Institute on October 4, 2018,” https://www.hudson.org/events/1610-vice-president-mike-pence-s-remarks-on-the-administration-s-policy-towards-china102018.

[1] “Remarks By President Obama to the Australian Parliament,” November 17, 2011, https://obamawhitehouse.archives.gov/the-press-office/2011/11/17/remarks-president-obama-australian-parliament.

For the complete article, read “The Pacific Island Nations and Japan-U.S. Alliance Cooperation“