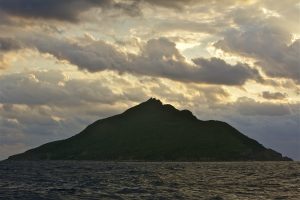 Sasakawa USA held a tabletop exercise (TTX) at the Lockheed Martin Center for Innovation (“The Lighthouse” in Suffolk, Virginia) to explore crises between Japan and China over the Senkakus. Former officials and experienced analysts participated in the game teams.

Four scenarios presented a range of potential Senkakus crises: a Chinese attempt to gain diplomatic concessions through massive shows of force; the leak of a Japanese plan to seize the islands; encounters between Chinese and Japanese vessels and helicopters leading to casualties; and the landing of a Japanese nationalist group on the islands.

The control group, an observation team, and the players themselves all recorded observations and insights. Below are the most significant.

• None of the three teams involved—Japan, China, and the United States—wanted a war over the Senkakus. Military moves were to seek a diplomatic way to resolve issues. Washington was anxious to facilitate a peaceful solution while maintaining its strong alliance with Japan.
• Tokyo and Beijing did not trust one another and were concerned about domestic political backlash if they failed to act strongly during a crisis. All three teams were primed to reinforce their military presence rapidly to deter any attempt to resolve sovereignty claims by physical seizure of the Senkakus.
• De-escalation was difficult because each side tried to deter the other by ordering additional military deployments, raising suspicion in the other country about its ultimate intentions.
• The TTX reinforced the experience of many real-world events that in an emerging crisis it is very difficult to get all facts straight early on and thus there is a reluctance to engage with other governments until there is certainty about what really happened.
• The PLA leadership within the China team prepared plans for a military operation to seize the islands on the pretext of removing the Japanese nationalist group, and believed that their plan would succeed. However, the communist party leadership players on the China team did not decide to authorize a landing. They were very aware of the high risks of combat operations, and were prepared to launch an invasion only if Japan occupied the islands, or if the American guarantee to support Japan under Article 5 wavered.
• Beijing had the advantage when it comes to innovative “deployments.” China’s maritime militia, which consists of hundreds of fishing boats, provided Beijing with the ability to organize a “maritime crowd” that could steam to the Senkakus and numerically swamp the Japanese Coast Guard presence.
• Tokyo’s position that its claim was “indisputable” created an interesting dynamic during TTX play. The Japanese team was very cautious when it came to any direct discussion with the Chinese about the Senkakus lest they inadvertently compromise the “indisputable” policy. The result was a very stilted and vague dialogue that hindered and thwarted de-escalation.

The following recommendations emerged from the exercise to the governments of Japan and the United States:

• Japan’s coast guard and maritime and air self-defense forces are currently stretched by the requirement of reacting to every Chinese deployment and flight to the Senkakus. Japan should consider reaction on a less frequent, irregular basis, or with fewer forces. To do so would not prejudice its legal and diplomatic positions on the question of sovereignty, and would ease the strain on its forces.
• It may be time for allied discussions to explore pros and cons of a change in U.S. policy to recognize Japanese sovereignty over the Senkakus. Such a revision would have no practical change to today’s circumstances; the treaty commitment remains, while the deterrent value of the pledge is probably strengthened. Further, such an acknowledgement might make it easier for Tokyo to work out some sort of modus vivendi with Beijing regarding the Senkakus.
• Japan and the United States need to conduct a series of exercises to establish a system of rapid and effective bilateral communications, using a more capable Alliance Coordination Mechanism (ACM) or other center, for handling a range of Senkakus crises, in which Japan takes the lead and the United States acts in support.
• With surface ships and submarines from all three countries potentially deployed to the Senkakus, and tensions high, the chances for incidents arising from sonar tracking or periscope sightings is high. To avoid inadvertent incidents, all three countries should progress from the naval Codes for Unplanned Encounters at Sea (CUES) agreements to “unidentified submarine contact” procedures for the East China Sea. The navies of all three countries have procedures for surface/sub-surface communication between their own surface vessels and submarines that could be used for this purpose. A related recommendation is to extend appropriate elements of the current naval CUES to coast guards.