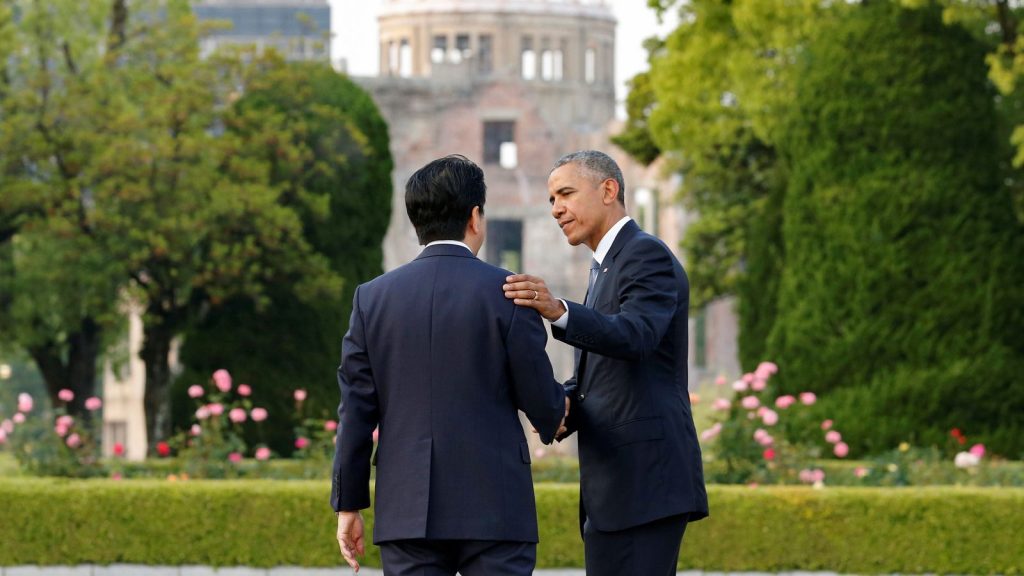 On May 27, 2016 in Hiroshima, Japan, President Barack Obama delivered one of his best speeches ever, crafted and delivered so masterfully that it will certainly leave a lasting legacy. In Hiroshima he towered above any politicking, which can easily get nasty in our less-than-ideal world, especially in an election year.

What was behind his visit to Hiroshima? In retrospect many actions and events—some planned, some not—merged to pave the way for President Obama to fulfill his wish to visit Hiroshima while in office.

The precedent for a visit was set by then-U.S. Ambassador to Japan, John Roos, followed by the current ambassador, Caroline Kennedy. In fact, Ambassador Kennedy has played an important role in the Hiroshima ceremonies in each of the last three years. Without those visits, President Obama would have been unlikely to follow suit.

In the months following Prime Minister Abe’s visit to Yasukuni Shrine in December 2013, Ambassador Kennedy was instrumental in reinforcing the importance of U.S.-Japan relations, as well as Mr. Abe’s dedication to enhancing the alliance, with leaders on both ends of Pennsylvania Avenue. She also lobbied for the Prime Minister’s speech before a Joint Session of Congress (the first time for such an address by a Japanese premier) which allowed him to express his sense of repentance for what happened during WWII. In addition, she consistently urged President Obama to visit Hiroshima.

Fumio Kishida, Japan’s Foreign Minister, is from Hiroshima. His electoral district covers a vast stretch of the city area that was obliterated on the day that “death fell from the sky,” as President Obama described it in his speech.

Mr. Kishida no doubt understands the ongoing value of the extended nuclear deterrent that the United States has provided Japan. His lifelong passion, though, has been to console victims of the atomic bombs, which is one reason he insisted on having the G7 Foreign Ministerial meeting in Hiroshima, which allowed Secretary of State John Kerry to visit the memorial and the people affected by the bomb. After his visit, Mr. Kerry endorsed the idea of a presidential trip to the Hiroshima memorial.

All these events took place in the context of enhanced bilateral relations that Shinzo Abe spearheaded. In April 2015, when he stood at the podium before both Houses of Congress in the United States, Prime Minister Abe said,

[perfectpullquote align=”full” cite=”Prime Minister Shinzo Abe, April 29, 2015″ link=”” color=”” class=”” size=””] Before coming over here, I was at the World War II Memorial. It was a place of peace and calm that struck me as a sanctuary. The air was filled with the sound of water breaking in the fountains. In one corner stands the Freedom Wall. More than 4,000 gold stars shine on the wall. I gasped with surprise to hear that each star represents the lives of 100 fallen soldiers.

I believe those gold stars are a proud symbol of the sacrifices in defending freedom. But in those gold stars, we also find the pain, sorrow, and love for family of young Americans who otherwise would have lived happy lives. Pearl Harbor, Bataan Corregidor, Coral Sea. The battles engraved at the Memorial crossed my mind, and I reflected upon the lost dreams and lost futures of those young Americans.

History is harsh. What is done cannot be undone. With deep repentance in my heart, I stood there in silent prayers for some time. My dear friends, on behalf of Japan and the Japanese people, I offer with profound respect my eternal condolences to the souls of all American people that were lost during World War II. [/perfectpullquote]

It was during this part of the speech that quite a few lawmakers became emotional.

During that trip, the Prime Minister chose to visit the WWII memorial by himself, and he neither expected nor anticipated any reciprocal action by the United States. His views also help explain why he felt no need to request an apology from the United States over its actions during the war, including the use of atomic bombs.

President Obama’s Hiroshima visit came to fruition through the direct actions of key players such as Ambassador Kennedy and Foreign Minister Kishida, as well as the fortuitous timing of the G7 summit that President Obama was scheduled to attend. Finally, Shinzo Abe took pains, first to repair U.S.-Japan relations in the aftermath of one of his predecessors calling for an “equidistant triangular relationship” among the United States Japan and China, and second to realize a series of actions intended to move U.S.-Japan relations and the bilateral alliance to into a new era of unparalleled strength and durability.

Tomohiko Taniguchi is a distinguished non-resident fellow at Sasakawa USA, a special advisor to Prime Minister Shinzo Abe’s cabinet, and a professor at Keio University. Read more of his research and analysis here.