The Past May Rhyme, But is Asia Now Singing a Different Tune? 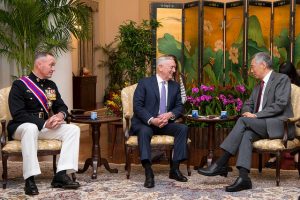 Here’s a conversation most Asia hands in the U.S. will agree is familiar: “Can we rely on you? Aren’t you pulling back from the region? Why do you always look at Europe and the Middle East first?”

The first time I heard it was 40 years ago when I worked for a member of the House International Relations Committee. The most recent occasion was at the annual Shangri-La Dialogue (SLD), organized by the International Institute on Strategic Studies and held in Singapore. There, Secretary of Defense James Mattis did his best to express the requisite “reassurance” of U.S. commitments in terms both psychological and factual for the assembled officials, experts, and journalists.

It helped the Secretary’s overall theme by backing efforts of the Association of Southeast Asian Nations to secure a Code of Conduct on maritime disputes with China, and that after a gap of seven months, the U.S. Pacific Command had conducted freedom of navigation operations (FONOPs). A major discussion point for ministers from Indonesia, Australia, Singapore, and France was the need for more cooperative FONOPs, although each was careful not to speak about them as a response to Chinese behavior.

But Mattis was not always able to dodge debate over U.S. policies under the new administration. At the SLD, opening just one day after President Trump pulled out of the Paris climate accords, the head of an Australian policy center praised Mattis as “the hope of our side,” but then pointedly asked whether the U.S. was “undermining the international order” by pulling out of the climate deal and quitting the Trans-Pacific Partnership (TPP) trade agreement.

The secretary deflected the question by praising Trump for traveling to the Middle East and the NATO summit, and then quickly noted the American public’s long history of wrestling with isolationism and foreign policy engagement as perfectly normal, and thus not cause for anxiety. All true, but he concluded by paraphrasing Winston Churchill: “To quote a British observer of us from years ago, bear with us. Once we have exhausted all possible alternatives, the Americans will do the right thing.”

The implications for American allies and partners throughout Asia were thus made crystal clear: at best, the Trump Administration is a work in progress with uncertain policies and outcomes. There is not just a perception gap; the U.S. is leaving a genuine power vacuum in Asia with the region unsure of the future U.S. role and the effectiveness of its policies, if and when clarified.

This widely-shared conclusion among participants was magnified by the basic lack of official U.S. representation at the SLD. For example, unlike at past SLDs, the always critical breakout session on the nuclear challenge presented by North Korea this year did not include any serving American officials, let alone a former one who had worked directly on North Korea matters. Meanwhile, Shigeo Yamada, a senior member of Japan’s National Security Council joined a retired South Korea general, now senior advisor to President Moon Jae-in, as a featured panelist at the session. China sent an experienced “America hand” to address the issue, and a senior Vietnamese general, in uniform, strongly endorsed a unified Korea and his government’s support for the UN sanctions against North Korea.

[perfectpullquote align=”left” cite=”” link=”” color=”” class=”” size=””]In the absence of American leadership, Japan seems to be trying to take on a more proactive role towards security in the region.[/perfectpullquote]

In the absence of American leadership, Japan seems to be trying to take on a more proactive role towards security in the region. The Trans-Pacific Partnership came up repeatedly at the SLD. Japan’s increasingly central role in keeping TPP “alive” through the “TPP-11” negotiations was singled out by Vietnam and Singapore for praise, noting that it helped to promote consultation and cooperation on a variety of common interests, even without the United States.

Japanese Defense Minister Tomomi Inada, a featured speaker on a panel with fellow defense ministers from Australia and France, conducted a highly public meeting with the new South Korean Defense Minister, Han Min Koo. She pledged that the Abe Administration would continue to share intelligence with the ROK on North Korea despite expected policy changes under the new South Korean president.

Indeed, following that meeting, a senior South Korean navy officer was quoted by the business daily, Nikkei: “Japan is our neighbor. As long as we have common interests, common security concepts, there is no specific reason why we should reject military cooperation in terms of military equipment and sharing of the information of that.”

In her official SLD remarks, Inada noted the military assistance Japan has provided to the Philippines, Singapore, and other countries in the region. In the days following, senior Japanese officials said that the Abe Administration planned to “expand” arms sales and the provision of defense equipment, including surveillance aircraft, to Southeast Asia because of the continuing Chinese militarization of East Asia’s maritime domain.

And at the “sideline meetings” which make the SLD so valuable for officials and delegates, senior Japanese Self-Defense Forces generals met with Chinese counterparts. The two sides agreed to similar information sharing on North Korea and to discuss what was elegantly phrased as “the security situation around Japan,” a polite reference to the tensions in the East China Sea between Tokyo and Beijing over the Senkaku Islands. One of the participants, Gen. Kazuaki Sumida, later reported to the media that “the talks were sincere and good.”

The G20 will be meeting next month in Germany. Watch for the profile being put forward by Prime Minister Abe and the other Asian leaders in attendance. The leadership vacuum in Asia left by the new U.S. administration will be filled, one way or another.