Managing the U.S.-Japan Alliance: An Examination of Structural Linkages in the Security Relationship 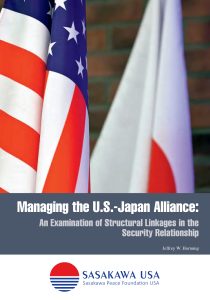 Recent changes on both sides of the Pacific Ocean have helped make the U.S.-Japan alliance the strongest it has ever been. In the United States, President Barack Obama pursued a rebalancing strategy to the Asia-Pacific that significantly elevated Japan’s strategic value. In Japan, Prime Minister Shinzo Abe passed a set of security laws on September 19, 2015, to ensure Japan will be able to play a more proactive contribution to peace. And on April 27, 2015, the allies released new Guidelines for U.S.-Japan Defense Cooperation. Much like the heightened expectations of a more proactive Japan that followed the revised National Defense Program Guidelines in 2004 and the completion of the Defense Policy Review Initiative with the United States in 2006, the passage of the security legislation and revision of the Defense Guidelines has once again raised expectations that the alliance will be more effective and proactive in addressing security issues throughout the Asia-Pacific region and beyond.

This is unlikely to change, even under the Donald Trump administration. Visits by Secretary of Defense James Mattis to Japan and Prime Minister Abe to the United States in President Trump’s first month served to reinforce the positive trajectory of security ties by reiterating past commitments to the alliance. What is more, even if the Obama administration’s ‘rebalance’ strategy to the Asia-Pacific is eliminated, or drastically changed, the Asia-Pacific will remain of crucial consequence to U.S. national security. This is a function of the region’s economic and security importance. Central to successful U.S. engagement will be Japan.

Successful engagement, in turn, depends on the effectiveness of structural linkages in the U.S.-Japan alliance among the institutional actors—both policy and operational—that communicate and coordinate with one another. If the United States and Japan are not communicating and coordinating effectively, their ability to engage the region on military and security issues will be constrained.

Below is an examination of structural linkages in the U.S.-Japan alliance aiming to answer the central question: Are the existing structures of communication and coordination optimized for managing alliance relations? It seeks to provide insight into the black box of bilateral decision-making by examining all the relevant actors in the national security sphere, how they interact, and any inherent structural challenges that may exist. Following a presentation of key actors in the national security sphere in both Japan and the United States is a description of how these actors communicate and coordinate with one another.

The report finds that while the existing structures of communication and coordination are generally effective, they are not optimized for managing alliance relations. Alliance managers face an array of challenges. This report divides these challenges into situations of peacetime and crisis and conflict. The report concludes with policy recommendations meant to overcome these challenges.