Dr. Phyllis Genther Yoshida is the Senior Fellow for Energy and Technology at Sasakawa USA. In this Commentary, she advocates for Japan to take on a greater global leadership role in fighting climate change. In particular, she sees a role for Japan by demonstrating decoupling domestically and internationally, which to a large extent, means decarbonizing the energy and transportation sectors while providing expanded economic opportunities and energy access. Dr. Yoshida is the editor of Japan’s Energy Conundrum: A Discussion of Japan’s Energy Circumstances and U.S.-Japan Energy Relations. 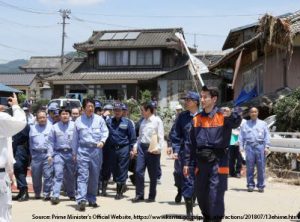 The time is right for the Abe government to assume an even greater global leadership role on climate change as it successfully has done for regional trade liberalization. Japan can lead by demonstrating how to decouple economic and emissions growth in the energy and transportation sectors both domestically and internationally while providing expanded economic opportunities and energy access. It is well positioned to play this role. Its extensive international activities related to climate issues date back to the Kyoto Protocol. Japan has developed impressive technology that could be shared with others.  It also is situated in Asia, a continent that has dominated global CO2 emissions since the early 2000s making Asian countries participation indispensable to the success of any global climate initiative.

Japan’s Prime Minister Shinzo Abe called for ambitious commitments to climate change in preparation for when he hosts the G20 in June 2019. In the Financial Times on September 24, 2018, he stated “Climate change can be life-threatening to all generations, be it the elderly or the young and in developed and developing countries alike. The problem is exacerbating more quickly than we expected. We must take more robust actions. And swiftly.” He repeated this call in January 2019 at the Davos World Economic Forum stating “Spending money on a green earth and a blue ocean—once deemed costly—is now a growth generator. We must invite more disruptive innovations before it’s too late.” But will Prime Minster Abe be able to follow up on his call and stimulate action that goes beyond just rhetoric?