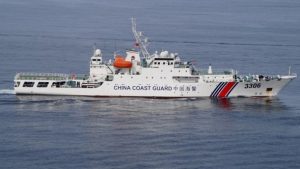 Being a maritime nation is one of the commonalities between Japan and the United States. This fact constitutes a firm basis of the bilateral alliance relationship. For a maritime alliance, the sea must continue to be one. In today’s world, the sea’s power to connect is far more important than its power to stop. For those who live in the huge maritime domain of East Asia, including the Japanese, this connecting power is increasingly important.

China’s maritime expansion poses a threat to the sea’s power to connect in East Asia. Geographically, Japan is a part of what China refers to as “the first island chain.” While China sees Japan as a geographic impediment to its access to the Pacific Ocean, from Japan’s viewpoint it is directly exposed to Chinese maritime expansion. China is aware that there is little possibility of Japan engaging in military provocations, and instead predicts that Japan will have to acquiesce to China’s superiority because of the shift in the balance of power at sea.[1] This is what China wants, but it is a nightmare for Japan and detrimental to regional stability and prosperity.

When we discuss China’s maritime expansion, we tend to focus on China’s claims on the South China Sea such as its “nine-dash line” and the legal status of maritime features. These will continue to pose serious questions for the United States

and Japan, and they are not the only issues. China’s actual maritime operations using its Coast Guard (CCG) and “fishermen” in the South and East China Seas should be highlighted for two reasons: first, China’s assertive operations have not stopped; and second, their operations in Japan’s territorial waters shrewdly violate the territorial sovereignty of Japan without inviting the application of Article 5 of the Treaty of Mutual Cooperation and Security between the United States and Japan.