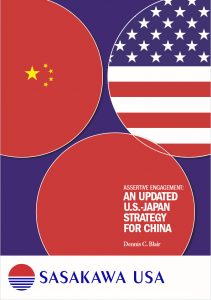 The U.S.-Japan alliance requires a fresh new strategy of “Assertive Engagement” toward an increasingly ambitious China to assuage territorial uncertainties in the Asia-Pacific and maximize opportunities for economic influence. That’s the recommendation of “Assertive Engagement: An Updated U.S.-Japan Strategy for China,” a new report authored by Sasakawa USA Chairman and CEO Admiral Dennis Blair.

The report recommends an improved strategy for the United States and Japan towards China for the period through 2030. It describes China’s current economic and political trajectory, presents four possible futures for Chinese development, and projects the likeliest path. It then analyzes the current, “mixed” U.S. and Japanese strategy towards China, including its shortcomings; proposes two alternatives—buildup or accommodation—and concludes by recommending an enhanced form of the current strategy, based on five areas of improvement:

• Better integration and alignment of American and Japanese strategies.
• Pursuit of strong, growing economies with both the U.S. and Japan that uphold the rules of fair economic competition, including the ratification of the Trans-Pacific Partnership.
• Development of an updated approach to economic relations with China in which China, as a large and fast-growing economy, is permitted input on global systems but also faces penalties for IP theft.
• Promotion of stronger combined military capabilities in the U.S. and Japan, including modernized forces, budgetary stability, and increased capacity to act together in East Asia and globally.
• Maintenance of a reliable deterrent posture in Japanese territories and adjacent areas to counter Chinese maritime actions, particularly in the East and South China Seas. Simultaneously, bolstering of confidence-building measures with China to avoid unintended incidents or accidents that could escalate into military conflicts.

“China’s security policy over the next 15 years will emerge from a complicated set of domestic developments, ambitions, and external events. Beijing is setting its own path to increase its influence and meet its objectives.” Blair said. “The U.S.-Japan strategy for China needs to be updated to deal more with China as it is, not as we either wish or fear it would be.”

The report was formally released to the public March 25 at an event featuring Admiral Blair and Bonnie Glaser, Senior Advisor for Asia and Director of the China Power Project at CSIS.