The Alliance Working in Utah

Initial Japanese contact with Utah arose on accident: In 1871, a diplomatic mission led by statesman Tomomi Iwakura was passing through Utah en route to Washington. Due to inclement weather, Iwakura and his party took an unscheduled detour to Salt Lake City from Ogden. There, they met with local politicians and members of the Church of Jesus Christ of Latter-day Saints. 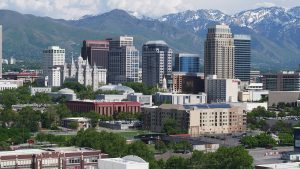 The Utah-Japan relationship has come a long way since then. According to Japan Matters for America, Utah ranks in the middle in terms of incoming Japanese FDI, receiving $5 billion in Japanese investments in 2017. In terms of the significance of Japan to Utah, however, Japan is Utah’s third largest export market, exporting $842 million worth of goods and services to Japan in 2019.

Recently, there has been increasing interest from both sides to strengthen Utah-Japan ties.  Utah and Japan share common interests to foster innovation in sectors such as aerospace, life sciences, and energy. Japanese companies are continuing R&D investment into key areas of the state, while in September 2019, Utah Governor Gary Herbert led a trade mission to Japan, accompanied by representatives from 22 of Utah’s leading companies.

At this critical juncture mutual interest between the two, Sasakawa USA traveled to Salt Lake City and Orem, Utah, on March 10-11 to hold public panel discussions on the importance of the U.S.-Japan alliance and the opportunities for increased Japanese investment in the Beehive State.

This event was co-sponsored alongside the World Trade Center Utah, the Utah Council for Citizen Diplomacy, and the World Affairs Councils of America.

For more details of the event, please visit here.

Sasakawa USA co-organized “Developing the 21st Century Workforce: Utah-Japan Collaboration” to examine Japan’s future overseas business investment interests and the kind of workforce needed in Utah to support these investments. The conversation sought to identify the challenges that Utah faces to recruit and train their workforce, and explore how Japanese and U.S. companies, state and local authorities, and educational institutions can work together to address these challenges.

This event was co-sponsored alongside the Consulate General of Japan in Denver, Utah Valley University’s Office of Global Engagement, and the World Trade Center Utah.

For more details of the event, please visit here.