The Alliance Working in Kentucky 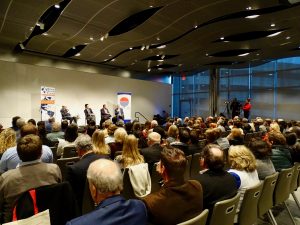 Situated between the automotive manufacturing hubs in the Deep South and the heartland, Kentucky’s ideal location began attracting Japanese auto suppliers in the late 1980s and early 1990s, ballooning to the 206 Japanese companies employing 45,000 Kentuckians today. While auto equipment manufacturing makes up the largest portion of Japanese business in Kentucky, Japanese companies also invest in many other cornerstones of the Kentucky economy, including bourbon distilleries and horseracing. Japan is Kentucky’s biggest foreign investor at 47 percent of all FDI. These strong economic ties have led to increased people-to-people and educational exchanges; eight Kentuckian and Japanese cities share sister city relationships and eight Kentucky universities have Japan Studies programs.

Sasakawa USA underlined the importance of this relationship by taking a delegation of experts from Washington, D.C. to Kentucky from March 5-7, 2019 as part of its fourth installment of The Alliance Working in America (TAWA) program. The delegation visited Louisville and Lexington to highlight the impact of the U.S.-Japan relationship in the United States and Kentucky as well as Japan-Kentucky collaboration in developing the Bluegrass state’s workforce. As with previous TAWA programs in other cities, Sasakawa USA partnered with the World Affairs Councils of America, the local World Affairs Council, universities, businesses, and other organizations for our events and activities. 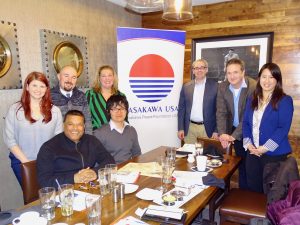 On March 5, Sasakawa USA organized an informal dinner with a few local alumni of the Japan Exchange and Teaching (JET) Program in downtown Louisville, KY. The dinner was held as an opportunity for participants to learn about existing programs in Washington, D.C. aimed at engaging the JET alumni community on U.S.-Japan relations at the national level and to hear more about the strength of Japan-Kentucky ties from local perspectives.

Champaloux shared Sasakawa USA’s partnership with the U.S. JET Alumni Association (USJETAA) including the mini-grant program for JET Alumni Associations in the United States and hybrid U.S.-Japan town halls for the JET alumni. Dr. Limaye also participated to introduce the East-West Center in Washington’s partnership with USJETAA and opportunities for JET alumni to contribute to its Japan Matters for America initiative. 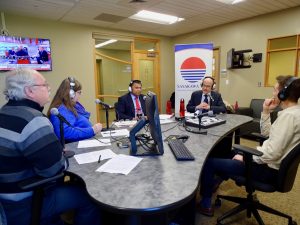 On March 6, Ambassador Zumwalt and Dr. Limaye visited the Indiana University Southeast to serve as special guests on Horizon Radio’s International Power Hour hosted by Dr. Jean Abshire, Associate Professor of Political Science and International Studies, and Dr. Cliff Staten, Professor of Political Science and International Studies. The discussion explored the deep and enduring relationship between Japan and the United States, the strong economic and educational ties between Japan and Kentucky, and how shared interests continue to strengthen cooperation in Asia and around the world. (Listen to their full interview here, or read more about their visit here) 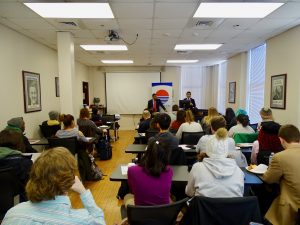 The delegation later visited the University of Louisville for two engagements with the undergraduate students in the Political Science department. Ambassador Zumwalt spoke about careers in the U.S. Foreign Service for the first event. In the second, Dr. Limaye and Dr. Nakayama offered U.S. and Japanese perspectives on U.S.-Japan security and trade relations in a lecture, “Underpinning Peace and Prosperity: U.S. and Japanese Perspectives on U.S.-Japan Relations.”

In the evening, Sasakawa USA co-hosted a public panel discussion, “The U.S.-Japan Alliance Working in Kentucky – Panel and Sake Tasting,” with the World Affairs Council of Kentucky and Southern Indiana (WAC) and the World Affairs Councils of America (WACA), in partnership with the East-West Center in Washington and the Japan-America Society of Kentucky. More than 120 people attended, including members of WAC and industry groups, as well as high school and college students. 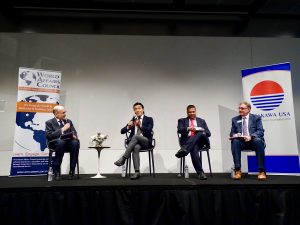 Ambassador Zumwalt moderated the lively and dynamic discussion which examined important current developments in Japan and their implications for U.S.-Japan relations, the depth and breadth of Japan-Kentucky ties, and the impact of Japanese business investments in Kentucky. The panel was followed by a reception, with special remarks by Consul-General Hiroyuki Kobayashi of the Japanese Consulate-General in Nashville. Guests also enjoyed a special sake tasting by Ayako Nakajima, Japan Outreach Coordinator at WAC. (View a video of the event.) 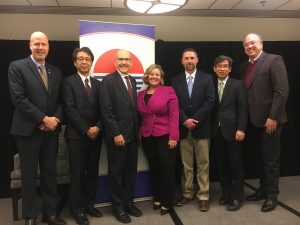 On March 7, Sasakawa USA visited Lexington, KY, to co-sponsor a public panel discussion, “Japan-Kentucky Collaboration: Developing the Bluegrass Workforce and Economy” with the Consulate-General of Japan in Nashville, WAC, and the World Affairs Councils of America. The event was also held in partnership with the World Trade Center Kentucky and the Japan-America Society of Kentucky.

The panel of Japanese and U.S. experts discussed Japanese investment interests in the United States and Kentucky, and identified workforce development as a top priority for both Kentucky and Japanese businesses investing in Kentucky. The conversation introduced initiatives by the local Chamber of Commerce and Japanese businesses to recruit and train the necessary workforce, and explored how Japanese and U.S. companies, state and local authorities, and educational institutions can work together to address these challenges. Approximately 45 people attended, representing these stakeholders with specific interest in Kentucky’s workforce issues and economic development. The discussion demonstrated how Japan-Kentucky ties could be strengthened through workforce development. (View a video of the event.) 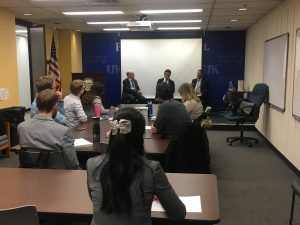 For the program’s final stop, the delegation visited the University of Kentucky to speak with graduate students at the Patterson School of Diplomacy and International Commerce. Ambassador Zumwalt moderated an engaging discussion with Dr. Nakayama and Dr. Limaye on U.S. foreign policy, Asia maritime security, and U.S.-Asia economic relations.

Through the TAWA Program, Sasakawa USA aims to improve understanding of Japan as the United States’ single most important ally and the depth and breadth of U.S.-Japan economic, cultural, and people-to-people ties. Sasakawa USA is grateful to our co-organizers and local partners for their contributions and support for this program. We look forward to future collaborations across the United States to strengthen U.S.-Japan relations.