The Alliance Working in Atlanta 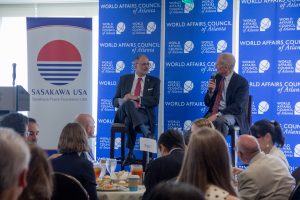 Ever since Jimmy Carter courted the first Japanese company to establish its U.S. operations in Macon in the 1970s, Georgia has been a touchstone for U.S.-Japan economic cooperation. In a state with a growing population of more than 10 million people, Japan is currently a leading international investor with at least 500 Japanese-affiliated companies employing over 30,000 workers in Georgia. The connections between Georgia and Japan go beyond just economic ties; there are 10 sister-city relationships established between Georgian and Japanese cities and 21 Japanese educational and cultural organizations in Georgia.

To highlight these ties, Sasakawa USA invited a delegation of experts from Washington, D.C., and held its third installment of The Alliance Working in America (TAWA) program in Atlanta, GA, from September 4-7, 2018, to explore with local companies, universities, and Japan-related organizations the benefits of U.S.-Japan relations to the United States and the state of Georgia. Throughout the week, Sasakawa USA co-organized several events in partnership with many local organizations including the World Affairs Council of Atlanta, Consulate-General of Japan in Atlanta, Georgia Institute of Technology Center for International Business Education and Research (GT-CIBER), Spelman College, Morehouse College, and the Japan Exchange and Teaching (JET) Alumni Association of the Southeast. 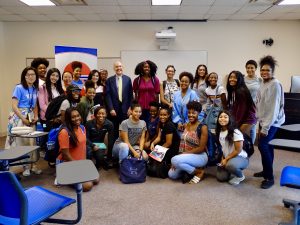 On September 4, Ambassador Zumwalt and members of the Sasakawa USA Education Team met for lunch with select faculty and students at Spelman College. Over lunch, participants enjoyed an informal conversation about the advantages of robust foreign studies programs, study abroad, and post-graduate opportunities through which students could gain international experience.

Following lunch, Ambassador Zumwalt visited Spelman College’s Introduction to Asian Studies class and two political science classes at Morehouse College. At these prestigious historically black liberal arts colleges, Ambassador Zumwalt spoke to approximately 100 students about the shared interests and common values of the U.S.-Japan relationship, the mutually beneficial economic ties, and the security challenges facing the Indo-Pacific region. He addressed students’ questions about government service and informed them about opportunities such as the Rangel Fellowship, a U.S. Department of State program which promotes historically underrepresented groups to serve in the U.S. Foreign Service. 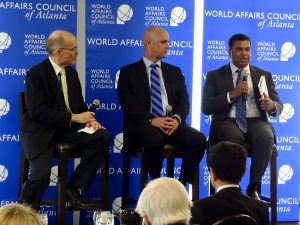 On September 5, Sasakawa USA partnered with the World Affairs Council of Atlanta (WACATTL) and the East-West Center in Washington to co-host a public panel discussion, “Japan and Georgia, Growing Together.” The event was attended by approximately 130 guests gathered from numerous companies with operations in both the United States and Japan. Following welcome remarks from World Affairs Council of America President and CEO Bill Clifford, Admiral Blair participated in a fireside chat with WACATL President, Ambassador Charles Shapiro on security concerns in the Indo-Pacific region and the role of the U.S.-Japan alliance to address those concerns. Limaye and YKK Corporation of America President Jim Reed then participated in a panel discussion moderated by Ambassador Zumwalt on the impact of Japanese investment in Georgia and the future of U.S.-Japan trade and security cooperation.  The audience responded to the experts’ remarks with many questions regarding the future of U.S. leadership in securing a rules-based liberal order in the region. Later that evening, members of the delegation along with local business leaders, professors, and a state politician were hosted for dinner at the private residence of Japanese Consul-General Takeshi Shinozuka.

On September 6, Ambassador Zumwalt and Limaye attended a private breakfast with board members of the Japan-America Society of Georgia. The informal discussion among participants centered on strengthening local U.S.-Japan ties and developing strategies to build closer people-to-people ties through sister-city relationships, educational and professional development programs and exchanges. 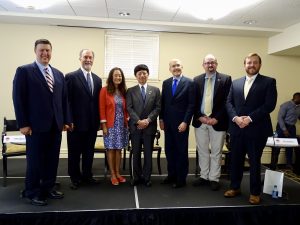 That afternoon, Sasakawa USA co-hosted another public panel discussion with the U.S. Department of State, the Japanese Consulate-General of Atlanta, and GT-CIBER. The event was also supported by the Georgia Department of Economic Development, the Japan-America Society of Georgia, and the Technical College System of Georgia. The discussion, “Investing in Georgia’s Workforce: A U.S.-Japan Dialogue,” explored with officials and local leaders how local governments, Japanese and U.S. companies, and educational institutions can work together to prepare Georgia’s future workforce. Approximately 70 people gathered from educational institutions, local businesses, and local and international government representatives.

Later that evening, Sasakawa USA co-hosted a private dinner with the JET Alumni Association of the Southeast that also served as the final event in the program. The enkai-style dinner allowed former JET participants to reflect on how their participation in the program contributed to their individual careers and to share ideas about how to continue contributing to the development of U.S.-Japan relations on a local level. In addition to the aforementioned events, the Sasakawa USA delegation had an opportunity to meet with representatives of the Georgia Department of Economic Development to exchange opinions about the successes and challenges of Japanese investments in Georgia, as well as representatives of the Japan External Trade Organization (JETRO) Atlanta.

Through our many partnerships and support, the TAWA Program in Atlanta gave Sasakawa USA a unique chance to bring together key members of the local community for a discussion on the importance of U.S.-Japan economic, educational, and cultural ties to the United States and the region. Sasakawa USA thanks our co-organizers and local partners for their contributions and support and look forward to further collaboration on U.S.-Japan relations going forward.