The Alliance Working in Minnesota 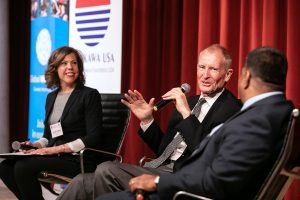 Minnesota’s relationship with Japan has flourished through trade and investment. Did you know the North Star State exported $413 million dollars of goods to Japan in the 2nd quarter of 2019 alone, making Japan a consistent Top Five destination for Minnesotan products in sectors like agriculture and medical technology? Japan is additionally the 4th-largest foreign employer in the state, contributing to Minnesota’s extensive manufacturing activities. Decades-long cultural and educational exchanges have also increased mutual understanding between the people of Japan and Minnesota.

On September 17-18, 2019, in the wake of Governor Tim Walz’s trade trip to Japan, Sasakawa USA organized its fifth installment of The Alliance Working in America (TAWA) program in the Twin Cities. Sasakawa USA took a group of D.C.-based policy experts as speakers to engage the local community on U.S.-Japan issues through a series of public and private programs, co-sponsored by Global Minnesota and the World Affairs Councils of America (WACA), and in partnership with other local institutions.

Videos are available of all, or a portion of, the following events: “Doing Business in Japan in Turbulent Times,” “Japan Matters for America: Japan Matters for Minnesota,” and “Global Conversations Minneapolis: The U.S.-Japan Alliance in an Evolving Indo Pacific.” 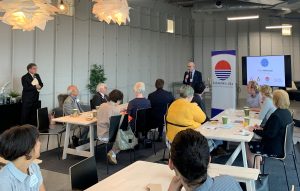 Sasakawa USA and the co-organizers opened the TAWA program with a “Japan-Minnesota Partnerships Breakfast” in partnership with the Japan-America Society of Minnesota (JASM) and the Mall of America, where the event was held. The event gathered members of the JET Alumni Association of Minnesota and the local community involved in Japan to exchange ideas on strengthening U.S.-Japan grassroots ties. 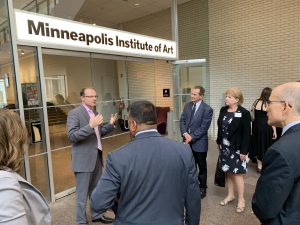 Following a private tour of the Minneapolis Institute of Art’s extensive Japanese exhibit, the delegation participated in a private luncheon at the State Capitol with representatives of Japanese-owned businesses in Minnesota to discuss issues in U.S.-Japan trade and investment relations. The luncheon was held in partnership with the Minnesota Trade Office. 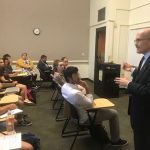 Afternoon activities included a visit to Hamline University, where Amb. Zumwalt provided a lecture to a class of undergraduate students at Hamline University in St. Paul, Minnesota’s first private university. The delegation concluded the day with a dinner hosted by our co-organizers and partners to engage further with local supporters and experts participating in the TAWA program. 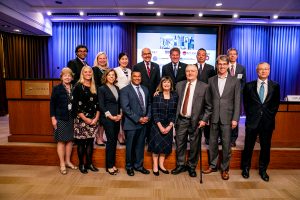 Sasakawa USA and the co-sponsors began Day Two with an event on “Doing Business in Japan in Turbulent Times” in partnership with Dorsey & Whitney, LLP and KPMG, LLP. Delegation member Ms. Cutler gave a keynote on the prospects of the U.S.-Japan trade talks and the so-called “Mini Deal” to an audience of mid-to-large Minnesota companies conducting or interested in conducting business with Japan. The audience was treated to a special appearance by former U.S. Vice President and Ambassador to Japan Walter F. Mondale, who introduced Ms. Cutler. Ms. Cutler then joined a panel of local business representatives to discuss the implications of regional developments on U.S.-Japan trade relations and U.S. business investment challenges in Japan. 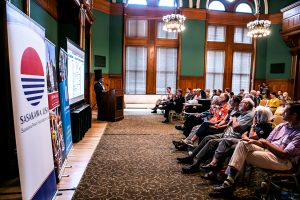 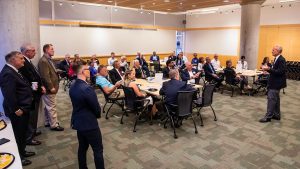 TAWA Minnesota culminated in a large public program, “Global Conversations Minneapolis: The U.S.-Japan Alliance in an Evolving Indo Pacific,” gathering approximately 80 members of the Minneapolis community interested in global affairs. Adm. Blair delivered a keynote on the evolution of the U.S.-Japan security alliance, followed by a discussion with Dr. Limaye on current strengths and challenges in U.S.-Japan relations, moderated by WACA’s Ms. Brailsford. The forum was preceded by a private reception with members of the U.S. Naval Academy Association’s Upper Midwest Chapter, featuring remarks by Adm. Blair.

In addition to the series of events, the Sasakawa USA delegation had an opportunity to reach out to a broader Minnesota audience through interviews with The Star Tribune, Minnesota’s largest media outlet. Ms. Cutler was featured in a Star-Tribune article on U.S.-Japan trade talks, and Adm. Blair highlighted Japan as “the single most important ally of the United States” in this Star-Tribune editorial.

Sasakawa USA is grateful to all our co-sponsors and partners for their support and looks forward to building on the newfound friendship. In particular, we were delighted to be joined at several events by representatives of the Japan-America Society of Minnesota, the Minnesota Trade Office, and the Honorable Kenji Tanaka, Acting Consul-General of Japan in Chicago.