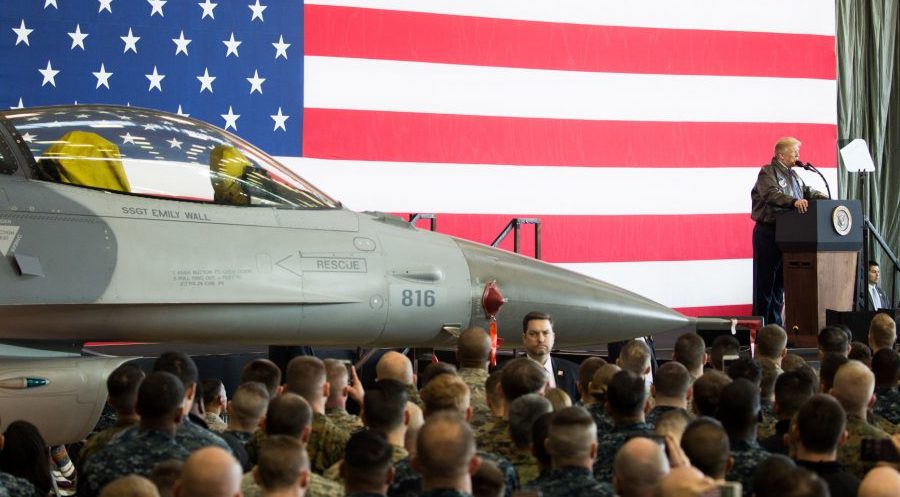 This article, “Trump in Japan: Can America Address Its Strategic Shortcomings?” is available through a partnership between Sasakawa Peace Foundation USA and Nippon.com. The article originally was published in Japanese on November 6, 2017 and in English on November 8, 2017.

On November 5, 2017, Air Force One touched down at Yokota Air Base, the US Air Force facility in western Tokyo. After a stop in Oahu, Hawaii, to visit the US Pacific Command headquarters, President Donald Trump kicked off his first tour of Asia, a 12-day trip that began with him alighting on the runway at the United States’s command center for its forces in Japan. By visiting both of these command facilities, which would be at the forefront of any conflict on the Korean Peninsula, Trump was pointedly delivering a stern message to North Korea’s Kim Jong-un about America’s readiness.

Wearing an Air Force jacket and speaking to members of the US Armed Forces in Japan and the host country’s Self-Defense Forces assembled at Yokota, the president spoke spiritedly: “No one—no dictator, no regime, and no nation—should underestimate, ever, American resolve.” He hailed the “American airmen and the Marines and Japanese Self-Defense Forces that are standing here with us today, side-by-side, confident, committed, and more capable than ever. You instill confidence in the hearts of our allies, and you strike fear in the hearts of our enemies.”

President Trump had spoken with Japanese Prime Minister Abe Shinzō by telephone before the trip; the leaders agreed that the key theme of their talks would be placing further pressure on North Korea to block its development of missile technology and nuclear weapons. With the exception of the North Korea issue, though, there is nothing on which the two nations are likely to reach easy agreement. In the field of the economy and trade, the Trump administration pulled out of talks on the Trans-Pacific Partnership agreement soon after its launch in January this year, leaving Japan to make its own moves toward an 11-member “TPP minus America” in its place. The United States hopes to forge free-trade agreements in areas like automobiles, agriculture, and pharmaceuticals, and is now pressing Japan to take part in bilateral negotiations that are not to its advantage. Any summit meeting that tackled these thorny issues would only serve to illustrate the broad gap between the two sides, as was seen in the recent trade talks between Japanese Deputy Prime Minister and Finance Minister Asō Tarō and US Vice President Mike Pence.

The North Korean Threat to the Alliance

Steve Bannon, once a central player in the Trump administration, has left his role as chief strategist to the president, but his thinking continues to inform much of what Donald Trump is seeking to accomplish from the Oval Office. Key among the goals of this thinking are to place American national interests above all else and to protect the economic interests of the lower- and middle-class white voters who are the bulk of the Trump base. Toward these ends, stresses Bannon, the United States must press for concessions from its surplus-running trading partners—China first, followed closely by Japan.

A leading ideologue from the “America First” camp, Bannon applies its thinking to the security sphere in addition to trade affairs. He describes the North Korea situation as “a mere sideshow” compared to the economic war with China that he says is already underway, urging the United States to focus on the big picture first.

In their summit talks this week, Abe and Trump affirmed that Japan and the United States would present a unified front in bringing the greatest possible pressure to bear against North Korea. However, the Trump administration places particular emphasis on the crisis posed by Pyongyang’s progress toward completion of an intercontinental ballistic missile that can reach targets in North America. One factor here is Trump’s desire to play up the direct threat to America in the face of his plummeting support ratings, which have fallen below 40%. At the same time, we cannot discount the possibility that Trump will try negotiating with the Kim regime to curtail its weapons development in exchange for the continuation of its rule in North Korea.

Even if the US mainland is freed from the threat of North Korea’s ICBMs, though, the Japanese archipelago will remain squarely within range of its medium-range missiles. This fact is a fault line threatening to split the Japan-US alliance. Prime Minister Abe’s warm welcome for the president was likely meant to head off the potential for an “America First” security policy coming out of the Trump administration.

A policy blunder by the George W. Bush administration played a part in bringing us to this point. In 2008 the White House removed North Korea from a list of states sponsoring terrorism, allowing the return via Russia of considerable funds in US dollars that had been trapped offshore. The North went on to put this money to use in its nuclear weapons and missile development program. Pyongyang, of course, went on to offer further support to terrorist organizations, as well as assassinating Kim Jong-nam in an airport in Kuala Lumpur, Malaysia, developing missile technology together with Iran, and selling arms to Islamic extremist groups. The US government has moved once again to place North Korea back on the list of terrorism sponsors, but this is too little, too late.

A Preemptive Strike for Trump?

In the wake of the September 2001 attacks on the heart of its economic and defense institutions, the United States brought all its military might to bear in wars in Afghanistan and Iraq, and still later against Daesh, the so-called Islamic State. What we might call the “Bush wars” left a massive power vacuum in East Asia, the region home to the potential flashpoints of the Korean Peninsula and Taiwan Strait.

[perfectpullquote align=”full” bordertop=”false” cite=”” link=”” color=”” class=”” size=””]The North Korean regime has been extraordinarily sensitive to the degradation of deterrence in the region caused by the US superpower’s focus on other parts of the globe.[/perfectpullquote]

The North Korean regime has been extraordinarily sensitive to the degradation of deterrence in the region caused by the US superpower’s focus on other parts of the globe, and has seized this chance to advance its nuclear and missile programs as a strategic means of remaining in power. And now it is making steady progress toward placing US military bases throughout the Pacific region, along with America itself, within range of its newest missiles.

This was the regional backdrop for the advent of the Trump administration in January this year. The new president has stated that “all options are on the table” when it comes to a US response to North Korea, including surgical military strikes and cyber warfare against the regime. Kim Jong-un has stepped up his rhetoric, promising to“frequently send big and small ‘gift packages’ to the Yankees,” and Donald Trump has responded in kind, threatening “fire and fury like the world has never seen.”

In a counterpoint to this escalating war of words, US Secretary of State Rex Tillerson has continued to push dialogue as the way out of this impasse. America’s military leadership, too, maintain a cautious stance with respect to a preemptive strike against North Korean targets, given that even a surgical attack could touch off a massive Northern counterattack dealing severe damage to Seoul, along with the US forces and their families stationed in South Korea. This month’s Abe-Trump summit talks appear to have included deep exploration of how much pressure can be brought to bear against North Korea without triggering an attack, whether a first strike against the North is feasible as a last option, and what to do about evacuating American and Japanese civilians from South Korea in the event of a contingency on the peninsula. The details, though, were not spelled out in the press conferences during Trump’s Japan visit.

Prime Minister Abe champions a “free and open Indo-Pacific region” built around strong ties between Japan and the United States, India, and Australia. And in this month’s summit, he secured agreement from President Trump that America and Japan would build on this framework in bolstering their common strategies. This was clearly formulated in the context of China’s moves to become a maritime power by establishing military outposts in the South China Sea and to enhance its Eurasian networks with the One Belt, One Road Initiative. Japan and the United States are increasingly concerned by China’s growing presence in East Asia, but they have yet to go beyond passive, reactionary responses to it.

National Security Advisor H. R. McMaster, commenting on President Trump’s Asia tour, stated: “What the United States does is endeavor to achieve peace through strength,” meaning in part “convincing your enemy or a potential enemy that they cannot accomplish their objectives through the use of military force.” McMaster is known as a talented player in the security field and a military man of deep and broad learning. But here he fails to recognize that while the United States has yet to achieve this goal of peace through strength, this is not the real problem facing the Trump administration.

[perfectpullquote align=”left” bordertop=”false” cite=”” link=”” color=”” class=”” size=””]The United States can be the sort of power that draws the young nations of Asia to its side.[/perfectpullquote]

Trump’s America is not seeing its influence dwindle in East Asia due to a decline of its military capabilities. The United States needs to realize that its presence as a superpower on the world stage is fading due to its flagging dedication to the democratic ideals, free trade, and moral authority that make America America. With lofty ideals and the force of its morals, the United States can be the sort of power that draws the young nations of Asia to its side. I hope that President Trump heeds the Asian voices delivering this message to him during his tour.