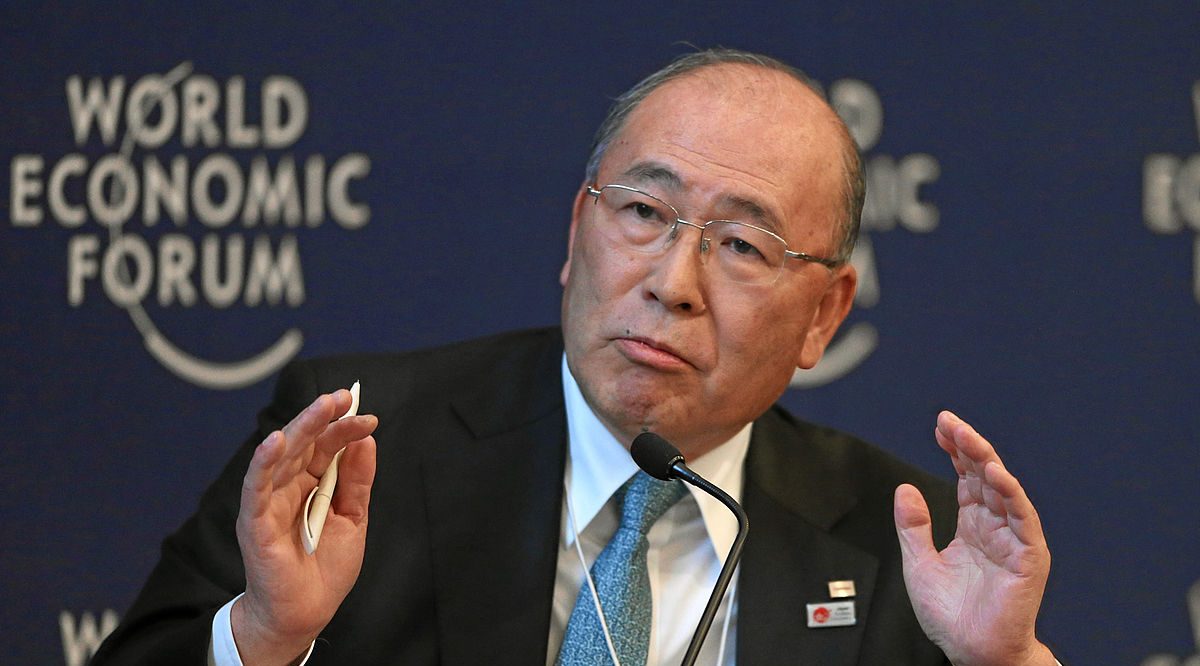 This article, “Toshiba in Crisis After Failed Nuclear Gamble,” is available through a partnership between Sasakawa Peace Foundation USA and Nippon.com. The article originally was published in Japanese on February 18, 2017, and in English on February 24, 2017. For the original posting, click here.

Once a driving force in Japan’s electronics industry, Toshiba today faces an existential crisis, brought about primarily by a failed investment in US firm Westinghouse Electric Company. The Japanese firm was led astray by the dream of becoming the world’s largest builder of nuclear reactor facilities. Losses from the company’s US nuclear business for the nine months through December 31, 2016, are forecast to soar above ¥712.5 billion.

Toshiba predicts total sales of ¥5.5 trillion for the fiscal year, set against a net loss of ¥390 billion and a ¥110 billion decline in net assets. It further projects a net worth of negative ¥150 billion (excluding minority interests) at the end of the year and a shareholders’ equity ratio of negative 3.3%.

Losses from Toshiba’s US nuclear business for the nine months through December 31, 2016, are forecast to soar above ¥712.5 billion.

The company must now recover its capital to avoid collapse. It is forced to consider such drastic measures as selling a stake in its core flash memory business, which has been a major earner for the company and a cornerstone in its growth.

How has Toshiba reached this dire state of affairs? The 2006 Westinghouse Electric acquisition was the seed for today’s bitter fruit. At a February 14 press conference, President Tsunakawa Satoshi was asked whether the decision to purchase the American company was a correct one. “Looking at the figures, it is hard to say that it was,” he replied.

Toshiba hoped to use its acquisition of Westinghouse—a leading global firm—as a lever to crack open foreign markets, but it was poorly timed. More stringent US regulations governing the safety of nuclear power plants, along with the disaster at Fukushima Daiichi, led to an unfortunate cooling off of the business environment.

Toshiba’s problems cannot simply be put down to bad luck, however. There were pitfalls in making a gamble that was beyond the company’s capacity to handle. Of course, shying away from high-risk, high-return ventures means missing out on growth opportunities. But if the financial and management skills to limit risk are lacking, it leaves the business at the mercy of fortune.

In the end, Toshiba lacked the level of net worth it needed to take on major risk. When a business strategy relies on overreaching, there is no way to maintain its momentum when it starts to falter. At the end of March 2005, Toshiba’s shareholders’ equity ratio was 17.8%, falling short of the 20% level said to be a minimum requirement for manufacturers.

Despite this, President Nishida Atsutoshi jumped on the opportunity to buy Westinghouse when British Nuclear Fuels (BNFL) put it up for sale shortly after his appointment in June 2005. The formal agreement, reached in February 2006, stunned the industry with its price tag of $5.4 billion.

The Nikkei covered the news on February 7, 2006, with the comment that the problem was the exceptional scale of the bid. Westinghouse’s annual profits before tax amounted to the equivalent of less than ¥20 billion, and BNFL had paid just $1.2 billion for the company in 1999.

President Nishida later admitted that competing bids had driven the price up to more than Toshiba had expected to pay. In a follow-up Nikkei story on February 22, 2006, Nishioka Takashi, president of Toshiba competitor Mitsubishi Heavy Industries, said that his firm saw no guarantee that Westinghouse would pay as a nuclear power business.

Why then, did Toshiba make this gamble? Because it was performing far worse than expected for a big-name firm.

When it began setting up the Westinghouse acquisition in 2005, Toshiba was celebrating 130 years since its foundation. It had grown to become a general electronics manufacturer, producing everything from heavy electrical machinery to consumer electronics. Its product lineup included railway carriages, home appliances, semiconductors, personal computers, medical equipment, and both thermal and nuclear power generators. Two chairmen of the powerful business lobbying group Keidanren were formerly of Toshiba, as was a president of the Japan Chamber of Commerce and Industry.

While it remained one of Japan’s best known corporate names, Toshiba struggled with low growth and profitability.

Toshiba had suffered a decade of stagnation leading up to 2005, however, in which sales stopped short of ¥6 trillion and its operating margin failed to reach 5%. The shareholders’ equity ratio was also below 20% from fiscal 1998 to 2004, and the company carried many liabilities.

While it remained one of Japan’s best known corporate names, Toshiba struggled with low growth and profitability. Nishida saw growth as essential, staking the company’s pride as a major player in putting it on an expansion track. He selected the nuclear and flash memory businesses as the platforms for escaping from years of stagnation in a single bound.

While these two businesses are very different, they both carry significant risk. The primary market for nuclear products is outside Japan, and the time between orders and completion is measured in decades. There is the potential for unforeseen increases in costs due to changes in the business environment. By contrast, flash memory business can bring rapid growth, but is also subject to major swings in demand over the shorter term.

As president, Nishida was confident he had the management skills to simultaneously handle projects spanning both lengthy and short timeframes. He appeared willing to accept sizable risk to speed up growth. Yet he miscalculated from the beginning.

As president, Nishida appeared willing to accept sizable risk to speed up growth.

The original plan in the Westinghouse acquisition was to limit Toshiba’s investment to 51% of the $5.4 billion total, with the remainder to be covered by joint investors.

Some of those planned investors withdrew in the face of the inflated sum required, though. This meant that Toshiba ended up providing 77% of the required funds. Despite this, Nishida remained confident, telling reporters that the company would recover its invested $4.2 billion within 17 years, or possibly 15 years if demand increased (Nikkei; October 18, 2006).

Toshiba’s consolidated sales broke through the ¥6 trillion barrier in fiscal 2007, reaching ¥7.2 trillion—according to the figures corrected following the discovery of fraudulent accounting in 2015. President Nishida won media acclaim for his managerial acumen in returning the company to a growth trajectory. When Westinghouse received orders in spring 2008 for four US nuclear plants, Toshiba’s strategy seemed to have paid off.

The downturn in the nuclear industry brought a new perspective, however, and these four plants became the cause of the company’s present woes. With no way of eliminating the weakness in its financial structure and no spare capacity, Toshiba soon fell into crisis. The situation was aggravated by lax risk management at Westinghouse, and in the parent company’s nuclear business as a whole, resulting from poor Toshiba governance.

Looking back, there were warning signs. In October 2012—the year after the Great East Japan Earthquake and Fukushima disaster—the US engineering giant Shaw Group, which held a 20% stake in Westinghouse, informed Toshiba that it wanted to sell its share. A put option in the group’s contract meant that there was no way for Toshiba to refuse. The selling price was around ¥125 billion according to a Toshiba announcement. Although it had reduced its initial investment from 77% to 67%, Toshiba now owned a highly risky 87% of the American firm.

Although it had reduced its initial investment from 77% to 67%, Toshiba now owned a highly risky 87% of Westinghouse.

When the Fukushima accident dampened global enthusiasm for nuclear power, Toshiba and Westinghouse saw orders dry up. In press releases, however, Toshiba stated that the first hints of construction delays and other issues impacting its US business dated back to the terror attacks of September 11, 2001.

The four US plants Westinghouse was set to build were to be the first new American nuclear facilities in 30 years. It was requested to incorporate design changes so they could withstand airliner crashes, along with additional, costly safety features. Tighter regulations delayed construction and increased costs. But who would cover those costs? Efforts by the utility firms that had placed the orders, Westinghouse, and subcontracted construction companies soon developed into a legal battle.

To help untangle this mess, in December 2015 Westinghouse bought CB&I Stone Webster from the US engineering firm CB&I, which had acquired it as part of its purchase of the Shaw Group. With this new capacity onboard Westinghouse took direct responsibility for construction, thereby aiming to avoid further lawsuits and friction.

However, after this acquisition of CB&I Stone Webster further additional costs were required, according to Toshiba’s version of events. For this reason it decided to write off goodwill—the difference between the purchase price of the construction firm and its net assets—amounting to ¥625.3 billion, recognizing the whole sum as irrecoverable impairment losses. This was combined with the remaining goodwill from the 2006 Westinghouse acquisition, resulting in total impairment losses of ¥712.5 billion.

It remains unclear why it suddenly became necessary to record such enormous losses. Could Toshiba have cut its losses at an earlier stage? Whether through optimism or willful ignorance, the company clung to its confident outlook even as conditions in the global nuclear business began to deteriorate.

Toshiba clung to its confident outlook even as conditions in the global nuclear business began to deteriorate.

President Tsunakawa was informed about the major losses from the CB&I Stone Webster acquisition in mid-December 2016. Then, during the process of finalizing the figures for the construction company’s assets and liabilities after purchase, there were internal reports warning of insufficient internal controls and concerns over inappropriate pressure from Westinghouse managers. This is why the parent company postponed its announcement concerning the balance sheet for the third quarter of 2016, from February 14 to March 14.

It has to be said that Toshiba’s governance of its nuclear business and WEC was slipshod. Toshiba Chairman Shiga Shigenori—who had long experience in the nuclear business, at one time simultaneously holding the positions of chairman, president, and chief executive officer of Westinghouse—announced his resignation. Current Westinghouse Chairman Danny Roderick has also resigned from his role as chief of Toshiba’s energy systems and solutions division.

In the immediate future, Toshiba must recover its damaged net worth by selling its flash memory business, which is valued at more than ¥1 trillion, and securing firm banking support. The two-pronged growth strategy Toshiba gambled on for over a decade has collapsed. And concerns over the nuclear business risk remain.

The company’s once shining reputation has greatly faded. It must repair its credibility—damaged after its corporate governance failings became apparent from the 2015 discovery of fraudulent accounting and the more recent problems in the nuclear business—by ensuring a more rigorous approach to governance going forward. Without these steps, it will be hard to maintain Toshiba as a dynamic and vital corporate presence—one that provides some 190,000 jobs worldwide.