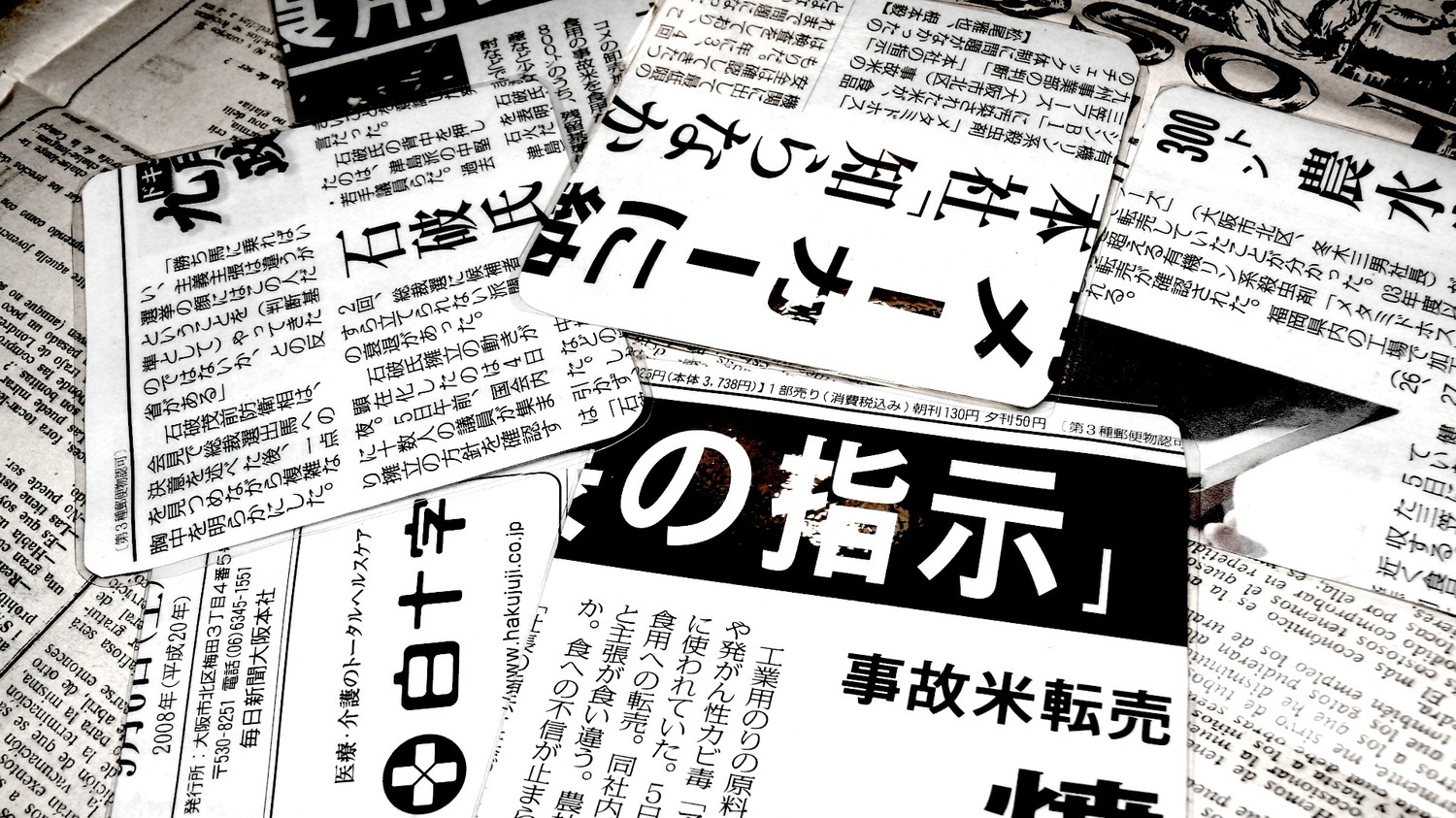 This article, “The Polarization of the Japanese Media and the Need for Middle Ground,” is available through a partnership between Sasakawa Peace Foundation USA and Nippon.com. The article originally was written and published in Japanese on December 7, 2015 and in English on January 12, 2016. For the original posting in English, click here.

Talk of “Polarization” May Entrench the Phenomenon

The coverage of the battle over the government’s national security legislation during the summer of 2015 has been taken to represent the polarization of Japan’s media. For example, a story that appeared in the online version of the daily Asahi Shimbun on the evening of September 19, the day the legislation was enacted, compared the front-page editorials carried in five major Tokyo papers — Asahi, Mainichi, Yomiuri, Sankei, and Tōkyō—under the title “Approval/Disapproval of Security Bills and Coverage of Demonstrations: Polarized Coverage in Newspapers.”

Three of the dailies were sharply critical of the government and ruling coalition for ramming the security legislation through the National Diet. Their editorials bore the titles “Keep Challenging the Politics That Makes Light of the Popular Will” (Asahi), “Be Humble in the Face of the State’s Error” (Mainichi), and “Carry on the Will to Be Nonbelligerent” (Tōkyō). Two others expressed support for the government and ruling coalition, Yomiuri in an editorial titled “New Legislation to Prevent the Ravages of War” and Sankei in an opinion piece “Strengthened Deterrence Against the Chinese Threat.”

The phenomenon of polarization in newspapers’ stances toward the government has actually been seen in connection with various political issues in recent years… This could mean the loss of the middle ground that is essential as an element in debating issues and reaching agreements between opposing sides.

The phenomenon of polarization in newspapers’ stances toward the government has actually been seen in connection with various political issues in recent years, such as moves to reactivate idled nuclear power plants and the drive to pass the government’s controversial Act on the Protection of Specially Designated Secrets. The recent split over the government’s security legislation cannot be said to have accelerated the polarization process. What concerns me, though, is the possibility that the focus on this two-way split may cause it to harden, blocking the emergence of a more fluid, multi-polar division of opinions. This could mean the loss of the middle ground that is essential as an element in debating issues and reaching agreements between opposing sides.

Looking at the background to this issue, we should note that Japan’s mainline newspapers were formerly criticized for being too uniform. This uniformity was seen, for example, at the time of the 1960 “Anpo protests,” a violent struggle against renewal of the Japan-US Security Treaty (called “Anpo” for short in Japanese). Irie Michimasa, writing in an afterword to his translation of Edward P. Whittemore’s The Press in Japan Today: A Case Study,(*1) offered the following comment:

“Japan’s newspapers have a strong bias against leaning toward the government. . . . The national dailies were placed in a peculiar position—one where it was totally impossible to find anything on their pages that defended the government or that would simply transmit the government’s position.”(*2)

The picture today is very different from what it was in 1960. Unlike then, the protests have not been violent, and some papers have backed the government. In a sense we can take this as showing that Japan’s post–World War II politics have matured over the intervening 55 years.

The Inseparability of “Objective Reporting” and the Commercialization of Newspaper Publishing

One point I would like to make here is that the story in the online Asahi summing up the various newspapers reactions to enactment of the 2015 security legislation quoted just five papers. Of the seven that carried the joint declaration criticizing the government back in 1960, the Tōkyō Taimuzu stopped publishing in 1992, but the other six are still around. The Nikkei, however, limited itself to objective reporting and could not readily be classified into either the pro or anti camp. The paper’s stance may be seen in the following short, calmly worded passage from its front-page Shunjū column on September 19: “The public is not seeking the excitement of the [boxing] ring from the National Diet.” So it bears remembering that there was one paper that sought to maintain a neutral position in its coverage of the 2015 dispute.

Another point to note is that the paper that took a neutral stance was an economic daily. In comparison with regular newspapers, which tend to stress their editorial stances, a paper that focuses on business and the economy can relatively easily take the view that its articles are information “products.”

To be sure, if we look back at the history of newspaper publishing in Japan, we find that during the industry’s growth period ordinary dailies also pursued a commercial approach to their activities. Today’s three top national dailies — Asahi, Mainichi, and Yomiuri — grew from lowbrow papers aimed at the masses into news-reporting organs targeted at the middle class. In 1918 the Asahi adopted an editorial code that included an explicit commitment to being “unbiased and nonpartisan,” and in 1922 the president of the Mainichi organization proclaimed, “Newspapers are commercial products.” Both were following a policy of expanding their business by attracting as many readers as possible, ranging from left to right on the ideological scale. And this approach of being impartial and objective in their reporting and treating their papers as commercial products was intimately linked to their moves to read the winds of public opinion, which resulted in uniformity among them in terms of content.

The tendency to be uniform prevailed during the period when newspaper circulations were growing, which continued through 1997. Newspaper prices had been fixed from 1955 on, and I recall that newspaper salesmen used to go from door to door making pitches like this: “Take our paper for just one year. You can have three months [or six months] for free. All the papers have the same contents anyway.”

Though even then the papers did not really all have exactly the same contents, they were indeed less different than they are now. The polarization that we currently see in newspapers’ offerings reflects the fact that the publishers are no longer seeking to maximize circulation in a growing market. The numbers of papers printed are declining, and the low birthrate and aging population totally preclude the prospect of overall circulation growth. The strategy that publishers have adopted is to aim not at selling subscriptions to “outsiders” but at holding on to the subscribers they already have.In practice, the progressive papers are seeking to keep their left-leaning subscribers by offering them anti-establishment articles, while the conservative papers try to hold on to their right-leaning subscribers with articles more favorable toward the government. This has led to increasing polarization both in the lineups of pundits writing comments and in the contents of the letters to the editor. For readers, the pleasure of seeing lots of articles that match their own opinions is similar to the enjoyment they get from reading social media timelines full of comments from like-minded friends.

The polarization of newspapers along the left-right ideological axis may be seen as the result of economically rational choices made by each of the papers as they seek to survive in a period of declining circulations. If journalists realize this, it may not be such a problem, but it could be very dangerous if they delude themselves into thinking that the ideological bias in their papers’ content is based on a mission to lead public opinion by presenting righteous views.

A Needed Middle Ground Between the Extremes of the Web

In the face of the current situation as described above, I would like to express a dissenting opinion, taking exception to the consensus that the Japanese press has become polarized. Looking at the media environment as a whole, including the excessively bifurcated world of expression we find on the web, I would assert that newspapers still occupy what can be described as middle ground.

Let me offer my own case as an example: For the past four years, I have been in charge of writing a column reviewing print media commentary for Tōkyō Shimbun, which is considered to be the most leftist of the dailies, and I have also been writing press reviews for Sankei Shimbun, which takes pride in its position at the far right of the spectrum.(*3) I am an ideological “outsider” at both Tōkyō and Sankei; these newspapers both clearly have middle ground capable of accommodating people like me on their pages.

The polarization that we currently see in newspapers’ offerings reflects the fact that the publishers are no longer seeking to maximize circulation in a growing market… The strategy that publishers have adopted is to aim not at selling subscriptions to “outsiders” but at holding on to the subscribers they already have. The polarization of newspapers along the left-right ideological axis may be seen as the result of economically rational choices made by each of the papers as they seek to survive in a period of declining circulations.

In the location-insensitive world of the Internet, such middle ground is inconceivable as a matter of basic principle. Communication with outsiders (those with opinions differing from one’s own) can turn a space into a forum, but in the online space of the web, outsiders are hard to notice. The fact that comments on social media consist almost entirely of roughly drafted posts is surely related to the nature of this space, where people feel no need to consider the impact of their words on those outside their own sphere.

Last summer, as the dispute over the government’s proposed security legislation raged, I was holed up in my office writing a book—“Tosho” no media shi: “Kyōyōshugi” no kōhō senryaku (The Media History of Tosho: Public Relations Strategy for the Cause of Intellectualism) (Tokyo: Iwanami Shoten, 2015).(*4) As I was writing, I came across the following passage by Shimizu Ikutarō, who was a hero among the commentators at the time of the 1960 security-treaty struggle: “Most people read only what they find easy to swallow. Intellectuals have endured the fate of having to stoically read books that offend them.”(*5) It made me sigh as I considered the current state of our polarized, “easy to swallow” media.

According to Shimizu, intellectuals are people who are capable of keeping up the practice of deliberately searching out and earnestly reading information that will challenge or break down their existing ideas—information that makes them uncomfortable to one degree or another. Back in the 1960s, the rise of television culture was making this practice difficult. And now, with the Internet, where the propensity for individuals to seek comfortable information is even greater than with TV, it may be inevitable that fewer people are going out of their way to find uncomfortable information. If that is the case, then I see it as all the more important to save newspapers in the Internet age as a platform where people can encounter “outsiders.”

• Has the World’s Media Lost Its Appetite for Japan?
• Newspaper Circulation in Japan: Still High but Steadily Falling
• Japan’s Newspaper Industry: Calm Before the Storm