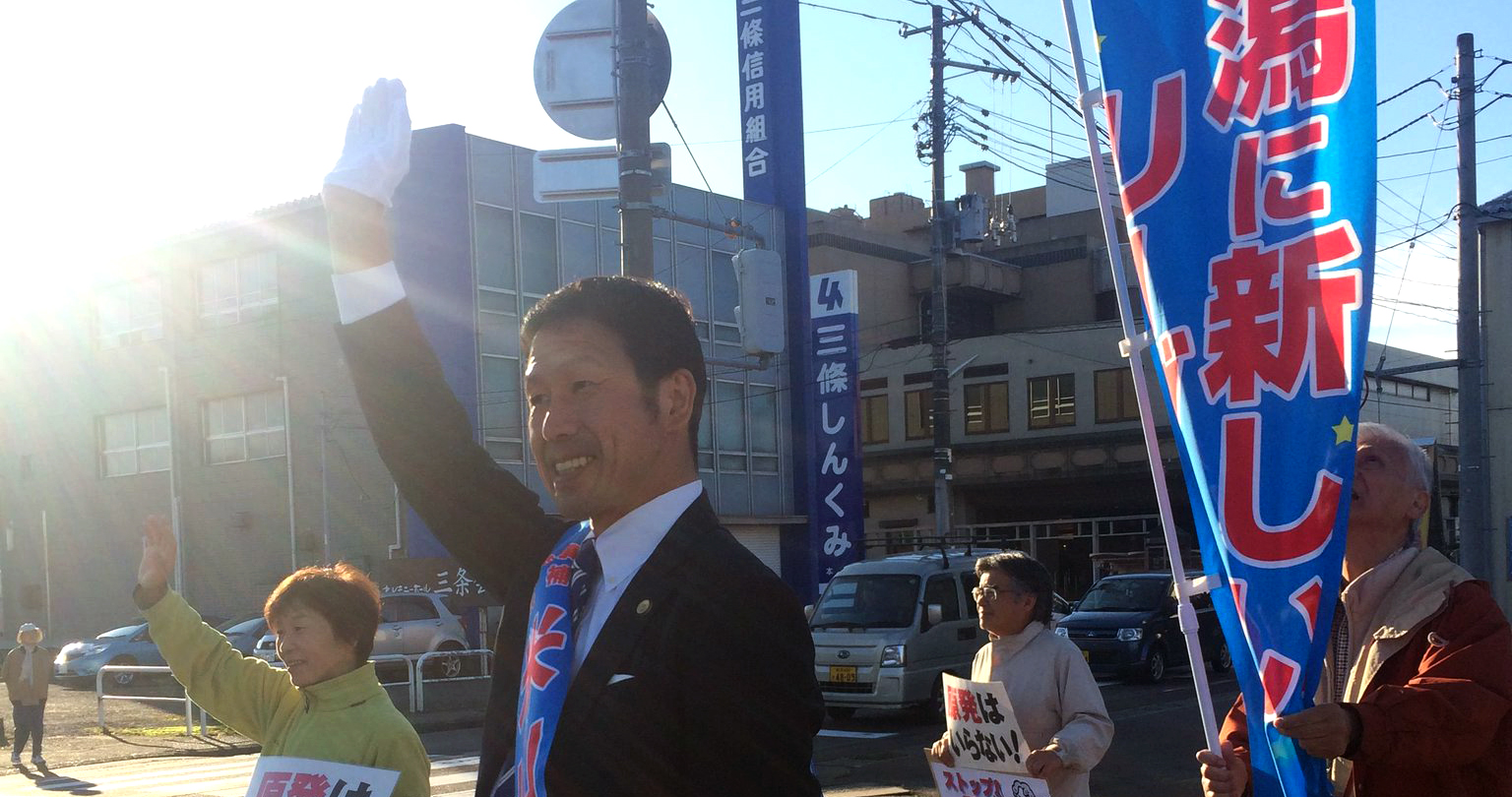 This article, “Niigata voters elect antinuclear governor in blow to Abe’s energy policy,” is available through a partnership between Sasakawa Peace Foundation USA and Nippon.com. The article originally was published on October 17, 2016. For the original posting, click here.

Antinuclear candidate Yoneyama Ryuichi won the Niigata gubernatorial contest on October 16, 2016, in a setback to the government’s efforts to restart Tokyo Electric Power’s largest nuclear plant, Kashiwazaki-Kariwa, located in the prefecture. Yoneyama, a doctor seeking office for the first time as an independent, ran on a platform of opposition to a restart and won the backing of the Japanese Communist Party, the newly-renamed Liberal Party (formerly People’s Life Party & Taro Yamamoto and Friends), and the Social Democratic Party. He defeated three independent candidates, including Mori Tamio, the former mayor of Nagaoka who was supported by the ruling Liberal Democratic Party and Kōmeitō. Turnout rose from 43.95% at the last election to 53.05%.

The result comes on the heels of the July election of Kagoshima Governor Mitazono Satoshi, who called for the suspension of operations of Sendai Nuclear Power Plant (restarted by Kyūshū Electric in August 2015). Five years after the Great East Japan Earthquake and the disaster at Fukushima Daiichi, public sentiment in prefectures with nuclear plants remains strongly against resuming operations.

Although governors have no direct legal authority to take nuclear plants offline, local support is effectively required for restarts. Yoneyama’s election has made this extremely difficult at Kashiwazaki-Kariwa and is also likely to affect the government’s energy policy.

The LDP and Kōmeitō threw their full support behind Mori, who had 17 years of experience as the mayor of the prefecture’s second city Nagaoka. He was also backed by most prefectural assembly members and mayors and was seen as a virtual certainty to win the governorship before the race began on September 29. His defeat is a major blow to the Abe Shinzo government and could impact on the timing of the prime minister’s decision to dissolve the lower house.

No Discussion of Restart

Kashiwazaki-Kariwa is named after the two municipalities in which it is located. While its seven reactors are all currently inactive, the Nuclear Regulation Authority is conducting safety checks on Units 6 and 7 to assess if they are ready for restart.

Former Governor Izumida Hirohiko, who was cautious about resuming operations at the plant, suddenly said at the end of August that he would not run for reelection. For a time, Mori was eyed as the likely replacement. Yoneyama announced his candidacy on September 23, just six days before the start of official campaigning. Positioning himself as Izumida’s natural successor, he said that without a detailed examination of the causes of nuclear accidents—notably the Fukushima disaster—their effects on health and livelihoods, and how people can evacuate safely, he would not discuss restarting Kashiwazaki-Kariwa.

The Democratic Party, the leading opposition force, did not formally endorse Yoneyama, as among the party’s supporters is the Japanese Trade Union Confederation, whose Niigata chapter had announced its support for Mori. Nonetheless, in the latter stages of the contest, DP leader Renhō campaigned in Niigata on behalf of Yoneyama.

The president of a medical corporation, Yoneyama Ryuichi was born in Yunotani (now part of the city of Uonuma), Niigata Prefecture in 1967. After graduating from the University of Tokyo’s faculty of medicine, he studied at the university’s graduate schools of economics and medicine. As a radiologist, he worked at the National Institute of Radiological Sciences and researched at Massachusetts General Hospital, attached to Harvard University. He is qualified to practice both medicine and law. He had been tapped to run as a Democratic Party candidate in the Niigata Prefecture fifth district in the next lower house election but decided instead to run as an independent in the Niigata gubernatorial election, which he won.