This article, “Koike Yuriko Shakes Up October Election Prospects with Party of Hope,” is available through a partnership between Sasakawa Peace Foundation USA and Nippon.com. The article originally was published in Japanese on September 28, 2017, and in English on September 29, 2017. For the original posting, click here.

Democrats Look to a Merger of Hope

On September 27, 2017, the Kibō no Tō, or Party of Hope, held a press conference in Tokyo to formally announce its appearance on the national political stage. Taking part in this event were 14 Diet members who had hitched their wagons to Japan’s newest party, headed by Tokyo Governor Koike Yuriko, including some high-profile defectors from the ruling Liberal Democratic Party and the main opposition Democratic Party.

Diet Members at the Party of Hope Launch Event 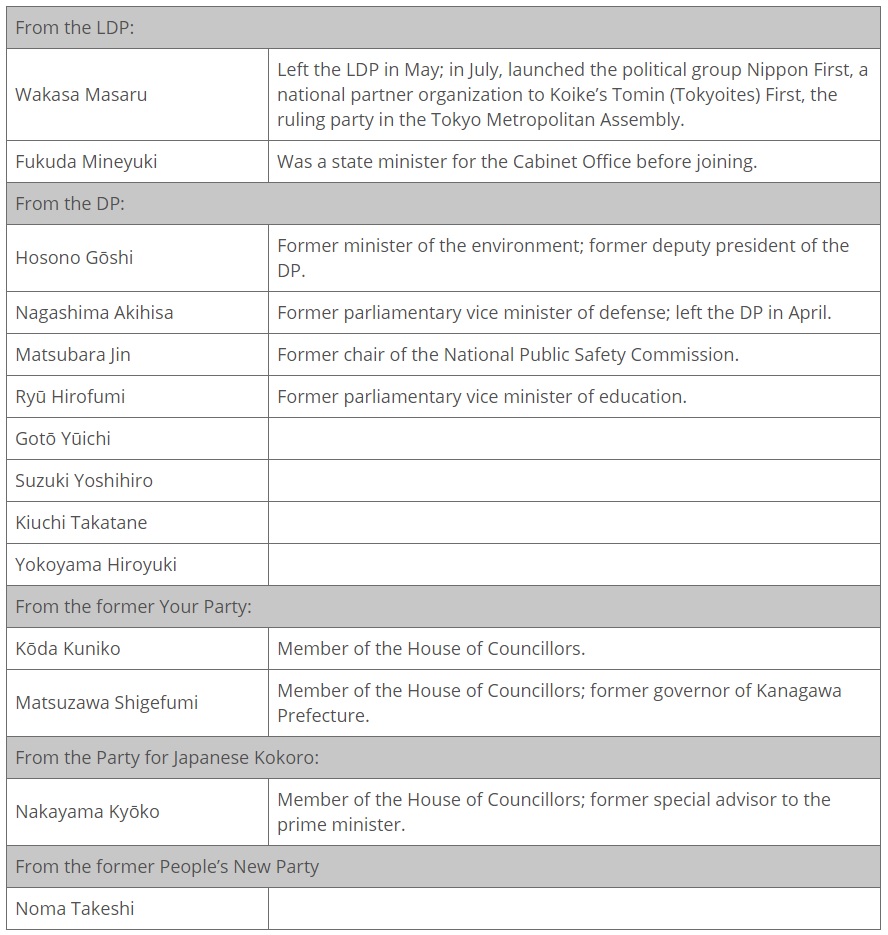 The launch of the new party was orchestrated by Wakasa Masaru, a House of Representatives member from the LDP close to Koike, and Hosono Gōshi, a former environment minister who had left the DP in August. Currently serving as Tokyo’s governor, Koike had originally planned to play a support role for the new political group as it took shape over time. Prime Minister Abe Shinzō’s decision to dissolve the Diet on September 28 and call a snap election for October 22, however, prompted her to take direct hold of the tiller. Talking of the need to “reset Japanese politics,” she announced her intention to lead the national party as she launched it herself.

In the evening on September 27, DP chief Maehara Seiji held his own press conference, announcing that his party would join forces with Hope in fielding and backing candidates in next month’s election. Seemingly signaling a willingness to dissolve the Democrats, he hinted at accelerating moves toward a dramatic realignment of opposition political forces in Japan.

The Party of Hope has already announced some planks for its platform, including a postponement or cancellation of the planned October 2019 hike in the consumption tax from 8% to 10% and an energy policy that weans Japan off of nuclear power completely. By drawing clear lines between itself and the LDP, the new party aims to snatch up people dissatisfied with the Abe administration and other independent voters. Given Koike’s charisma, she seems certain to draw considerable media attention in the period heading up to the October 22 contest.

A public opinion poll carried out by the Mainichi Shimbun on September 26–2­7 found that while 29% of respondents planned to cast their proportional representation vote for the LDP, fully 18% were prepared to select the Party of Hope instead. Added to the 8% of voters pledging to vote for the DP, this would create a vote-getting machine on par with the ruling party. These poll results point to the potential for Hope to attract a serious number of unaffiliated voters on election day.

No Hat in the Ring for Koike Herself?

The impact of the brand-new Party of Hope on the electoral scene will be determined by several factors. The first is the number of candidates that the party will be able to get onto its rolls in the less than two weeks remaining until the campaigning period begins. Wakasa began laying the groundwork for this earlier in the month with his launch of the Kishōjuku, a training program for new politicians, but given the election timeframe, these preparations are hardly sufficient to create a solid foundation for electoral success. And if the plan is to rely on DP candidates running under the Hope flag, the new party will open itself to criticism that its members are mere party-hoppers with nothing substantively new to offer.

Rumors are already flying that Koike may run for a House of Representatives seat herself.

Second is the question of what Koike plans to do. Rumors are already flying that she may run for a House of Representatives seat herself—a move that would guarantee immense media attention for her and breathe fresh wind into her party’s sails, but would also bring her in for criticism that she is letting down Tokyo’s voters by abandoning its governorship just three months after winning it in July this year.

The third factor is the sort of interplay to be seen between the Party of Hope and other political forces on the national scene. Koike has come out gunning for Prime Minister Abe, positioning his LDP as a clear opponent, but Hope’s relationship with the LDP’s junior coalition partner Kōmeitō is more complex. At the metropolitan level, Kōmeitō works together with Koike’s Tomin First group, and her national party is also likely to make overtures to its members.

Things are also murky when it comes to the opposition parties in the Diet. While the DP appears on course for an effective merger with Hope, and Nippon Ishin (the Japan Innovation Party) is signaling its willingness to cooperate on electoral strategy, the Japanese Communist Party has already branded the new Koike vehicle “nothing more than a support force for the Abe regime.” The opposition strategy of coordinating candidacies across parties to avoid splitting the opposition vote in each district was a moderate success in the House of Councillors election last year, but could founder this October if broad cooperation cannot be reached.