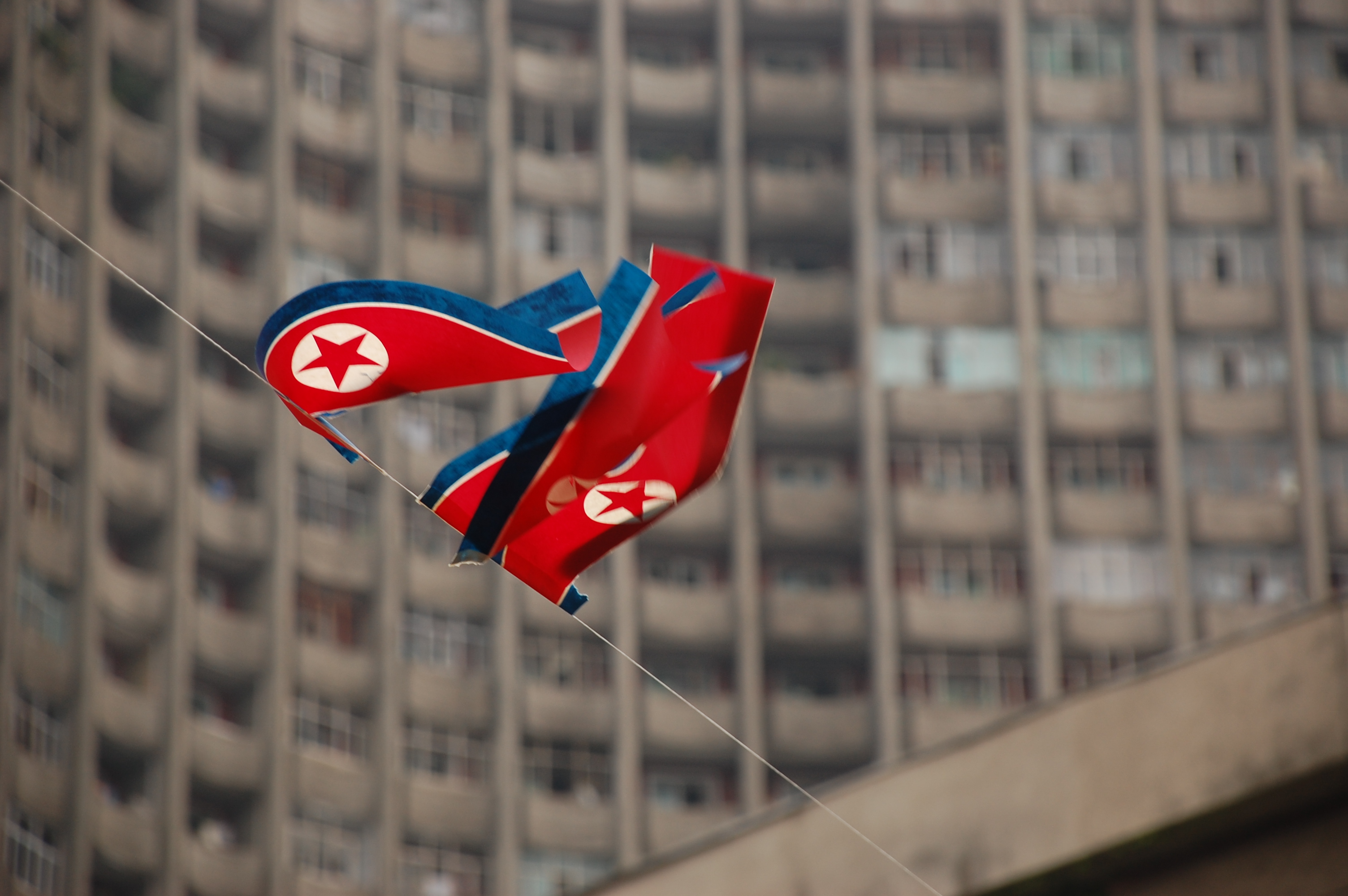 This article, “Kim Jong-un’s Sword of Damocles,” is available through a partnership between Sasakawa Peace Foundation USA and Nippon.com. The article originally was published in Japanese on September 12, 2016. For the original posting, click here.

The UN Security Council must respond to North Korea’s fifth and latest nuclear test with tough new sanctions including a complete oil embargo on the country. Without such drastic action, Pyongyang will continue its headlong drive to gain recognition as a nuclear-armed power.

The leaders of China, South Korea, and the United States have seriously misjudged North Korea’s leaders by assuming that they share the same basic values and failing to grasp the special circumstances that compel Pyongyang to pursue nuclear development as a matter of life or death. The result has been a monumental policy failure, as clearly demonstrated by the North’s nuclear test on September 9. There will be no solution to this problem until the North Korean government and military are confronted with a clear choice between denuclearization and collapse.

What much of the international community has failed to grasp is that the current regime regards the nuclear weapons program as its lifeline, the key to its survival. At this point, the only way to stop that program is to apply sanctions that pose a more imminent threat than abandonment of the program. So far, however, opposition from China has blocked the Security Council from adopting sanctions that really threaten the regime’s survival.

The North will continue to push ahead with nuclear weapons development unless the international community implements such drastic measures as a full-scale oil embargo, all-out financial sanctions (to block the flow of dollar, euro, and Chinese yuan assets), inspection of cargo and naval blockades to halt exports of missile and nuclear arms components, a ban on travel to and from North Korea, and suspension of diplomatic relations between European capitals and Pyongyang.

Japan has some options left for toughening sanctions as well. For example, it can take further steps to halt the flow of cash into North Korea, strengthen travel restrictions, ban the entry of any ship that has called at a North Korean port, and prohibit refueling of such ships. Japanese lawmaker Antonio Inoki is to be roundly condemned for his poorly timed trip to North Korea. Such individual diplomatic initiatives can only undermine the impact of Japan’s response.

On August 24 this year, North Korea fired a submarine-launched ballistic missile toward Japan. On September 5, while the Group of 20 was meeting in China, it launched three medium-range Nodong-class missiles into the ocean from the Hwangju region bordering China. Four days later, it carried out its largest nuclear test to date. How should we interpret these actions?

Media pundits and officials in Japan and elsewhere characterized the September 5 missile launches as a show of force directed toward the Group of 20  and the September 9 nuclear tests as a bid to force Washington to the bargaining table. But what did Pyongyang expect to gain from such timing? Surely North Korea’s leaders have enough sense to realize that by firing missiles during a summit hosted by Beijing, they would cause China to lose face and antagonize it further. Similarly, they must have known that a nuclear test carried out immediately after the Security Council had issued a condemnation of that missile launch would enrage Washington.

The government of Chairman Kim Jong-un understood the risks of this unfortunate timing, but it was obliged to ignore them because of the intense pressure it is facing as it struggles to consolidate power. It felt it had no choice but to respond to the large-scale U.S.–South Korean joint military drills going on in July and August and to make a powerful display on September 9, the North Korean holiday marking the foundation of the republic.

North Korea invariably responds to the U.S.–South Korean joint war games with its own domestic drills and other military displays, despite the strain on the army’s meager fuel supplies. Back in 1992, when Sasakawa Yōhei visited North Korea as president of the Nippon Foundation, Supreme Leader President Kim Il-sung actually complained to him that the joint exercises by South Korea and the United States exhausted the North Korean military and drained its precious stocks of fuel oil. In short, the North feels strongly that these exercises cannot go unanswered.

Meanwhile, Kim Jong-un is under particularly intense pressure to act because he has yet to fully consolidate power domestically, and reports suggest that dissatisfaction is spreading within the military.

Of course, Pyongyang describes its nuclear program as a defensive measure needed to safeguard North Korea’s “dignity and right to existence” from the growing threat of nuclear aggression by the United States. This portrayal of a serious U.S. threat is useful in distracting from the real problems plaguing North Korea, and the United States has not worked hard enough diplomatically to counter this perception.

But the fact is that Kim Jong-un is in an extremely precarious situation at home. The 32-year-old whippersnapper has nowhere near the political savvy needed to govern a nation of 20 million and its million-member army. Moreover, with even Russia and China refusing to meet with him, he lacks the legitimacy conferred by talks with other national leaders. Meanwhile, he has embarked on a very dangerous course by purging hundreds of senior officials.

[perfectpullquote align=”right” cite=”” link=”” color=”” class=”” size=””]Pyongyang describes its nuclear program as a defensive measure needed to safeguard North Korea’s “dignity and right to existence” from the growing threat of nuclear aggression by the United States.[/perfectpullquote]

In 1992, Kim Jong-un’s grandfather, Kim Il-sung, told Sasakawa that any North Korean leader who could not earn the trust of the older generation would fail. In North Korea, where Confucian values continue to hold sway, he said, “The elders have a powerful voice, and no regime can last if it fails to recognize that.” If Kim Il-sung’s dictum still holds, then Kim Jong-un has chosen a risky course indeed. He has undertaken a purge that has involved the ruthless execution of senior military leaders, along with a massive generational changing of the guard at the middle and higher and echelons of the military, the party, and the government.

In the military, there have been rumblings of dissatisfaction and even mutiny. Not long ago the South Korean news media uncovered information indicating an attempted assassination. The precipitous drop in the frequency of Kim Jong-un’s inspections of the armed forces has further fueled speculation regarding his touchy relationship with the army.

During the regime of Kim Jong-il, the status of the army was sacrosanct under the government’s military-first (songun) policy. Military personnel enjoyed privileged treatment and were often known to behave in a high-handed manner toward civilians, commandeering scarce food and other resources.

Under Kim Jong-un, the nuclear weapons program has become the number-one priority. As a result, many army units and officers are feeling the pinch in terms of supplies and funding.

Control of economic resources seems to be a major bone of contention in this struggle. Under Kim Jong-il, the military brass secured extensive mining interests, as well as foreign exchange privileges. Kim Jong-un’s regime has attempted to reclaim these key sources of wealth, and individuals who resist have been eliminated.

At such a volatile juncture, rapid, quantifiable progress in the development of nuclear weapons is vital to Kim Jong-un’s survival. If the current regime is to secure the respect and allegiance of the military, it must validate its nuclear-first policy by forcing the United States and others to accept North Korea as a nuclear state in the true sense of the word—that is, a country with nuclear warheads and the means of reliably delivering them to a target. This means accelerating its testing of nuclear weapons along with submarine-launched and intercontinental ballistic missiles.

Ultimately, however, Kim Jong-un must also establish his international legitimacy  to ensure his government’s stability over the long term. The nuclear program is inextricably tied to this objective as well.

If North Korea’s nuclear program continues to progress, China and the United States will eventually be forced to choose one of two options: accept North Korea as a nuclear state or bring about the regime’s collapse. Pyongyang appears to be well aware of the latter possibility as the worst-case scenario, but it is gambling heavily on the former.

[perfectpullquote align=”left” cite=”” link=”” color=”” class=”” size=””] If North Korea’s nuclear program continues to progress, China and the United States will eventually be forced to choose one of two options: accept North Korea as a nuclear state or bring about the regime’s collapse.   [/perfectpullquote]

Several years ago, the Kim Jong-un regime embraced a strategy of completing its nuclear development program and announcing an end to further nuclear testing in a bid to bring Washington to the negotiating table. In conjunction with this strategy, it took the unprecedented step of inviting a top U.S. intelligence official, Director of National Intelligence James Clapper, to Pyongyang in 2014. The architect of this plan was Kim Yong-chol, vice-chairman of the Workers’ Party of Korea and one of Kim Jong-un’s top advisers on military and diplomatic affairs.That this strategy remains in effect is apparent from the statement released by the North’s Nuclear Weapons Research Institute after the recent nuclear test.  It asserted, among other things, that “the nuclear test provided final confirmation of [the nuclear warhead’s] performance and power.” In reporting on the statement, the media incorrectly translated this passage using the phrase “finally confirmed.” The correct translation, “provided final confirmation,” is significant because it implies that no further testing is required. It remains to be seen whether Pyongyang actually intends this to be its last nuclear test, but it seems certain that some deliberate intent underlies the insertion of the word “final” where “confirmation” alone would have sufficed. Of course, a declared end to the nuclear testing program would doubtless meet fierce resistance from the military’s top brass. This could explain why the statement, while avoiding any direct reference to “continued nuclear testing,” pledges “further measures to bolster the state nuclear force in quality and quantity.”

With its obsolete weapons and meager oil supplies, the North Korean army is incapable of fighting a war. North Korea’s armed forces, from its generals down to its rank and file, fear an American attack more than anything, knowing that they could not possibly win such a conflict. They are convinced that nuclear deterrence is the only reliable protection from such an attack. The current regime needs to reassure them in order to secure the military’s loyalty. Otherwise, it will collapse.

Under the circumstances, any leader who unilaterally announced an end to the nuclear testing program would risk being removed or assassinated. Kim Jong-un may be facing the toughest decision of his life.