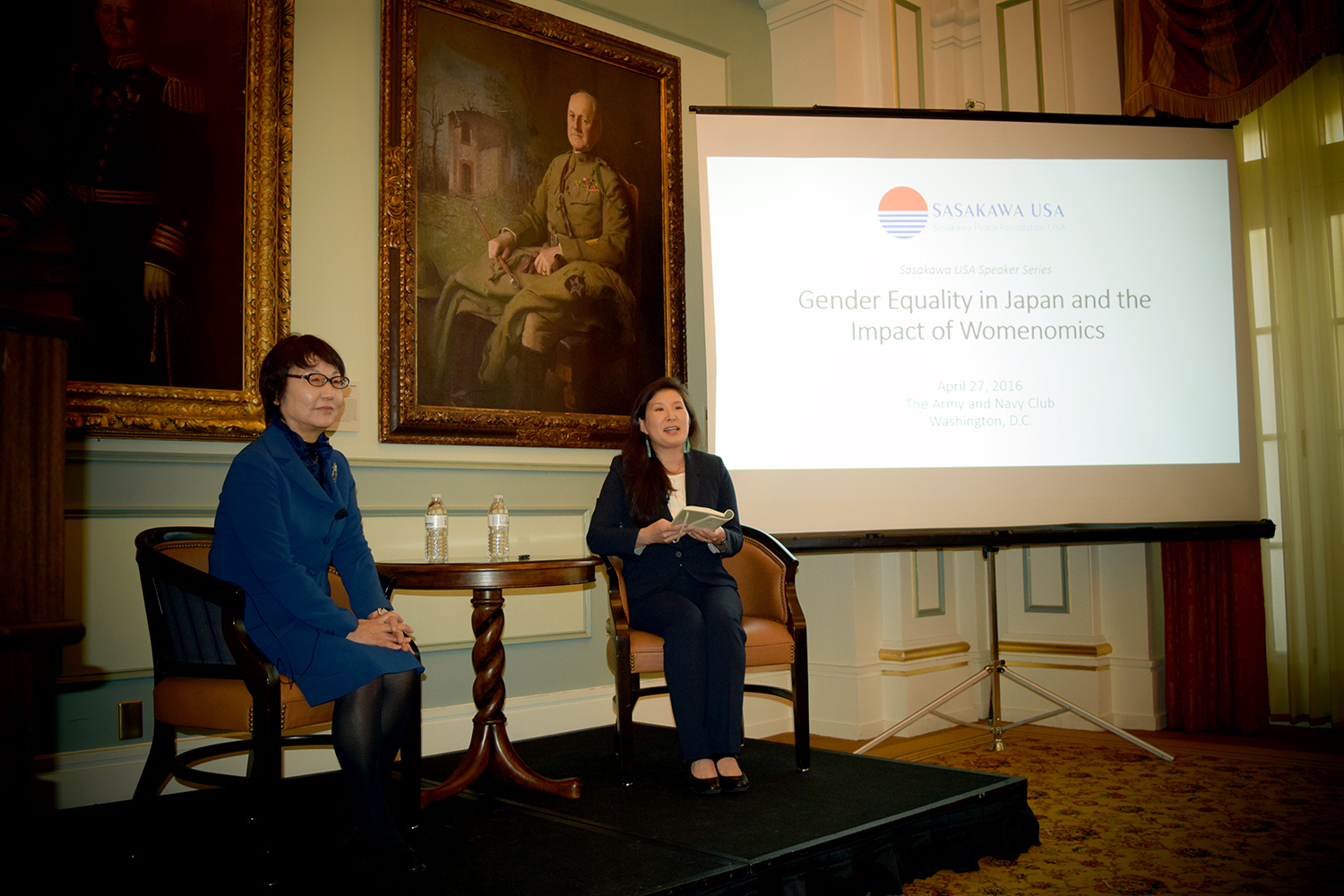 This article, “Fostering a New Generation of Women Leaders,” is available through a partnership between Sasakawa Peace Foundation USA and Nippon.com. The article originally was published on June 7, 2016. For the original posting, click here.

Japan boosted its commitment to women’s empowerment in April this year, enforcing legislation requiring large companies to publicly set goals for hiring and promoting female managers. Under the new law, all businesses with more than 300 employees must publish figures on the number of their female workers and establish action plans to meet in-house hiring targets.

Many laud the regulations for introducing transparency and ensuring disclosure of hiring data, steps many consider essential to raising female labor participation—a crucial component in safeguarding Japan’s economic wellbeing. But even as Prime Minister Abe Shinzō has positioned “womenomics” as a plank of his economic growth strategy, Japan Inc. has yet to fully embrace women’s empowerment. One frequently cited issue has been the challenge of securing qualified female candidates for upper-level positions, given the male-dominated business world’s long-time neglect in grooming women leaders.

Meeting the Challenge of Gender Equality

As Japan moves to close its gender gap, there is growing demand for programs to give women with the skills and knowledge necessary to assume leadership roles in the public and private sectors. For the last three years the US Embassy in Tokyo and the US-Japan Council have collaborated through the ongoing Tomodachi Initiative to help meet this need, teaming up with the insurance company Metlife to provide Japanese female university students with opportunities to learn from influential women leaders in business, politics, and other fields on both sides of the Pacific.

The program takes full advantage of the broad public and private connections of the embassy and USJC, giving participants unique opportunities to learn. Illustrative of this is a week-long study trip to the United States conducted as part of the program, which this year included sessions with such prominent figures as former deputy US trade representative Wendy Cutler and US State Department counselor Kristie Kenney.

A participant speaks during a leadership workshop. (Courtesy of the US-Japan Council)

The opportunity for mentoring is a key facet of the program. A second-year engineering student at Sophia University who participated in the program said being a mentee was one of the best aspects. “At school the focus is largely on peer groups, such as extracurricular clubs,” she explained. “It was immensely helpful to regularly talk with someone who could share real-life experiences and offer guidance.” Other program members echoed this sentiment, emphasizing that it was the first time for them to receive practical advice on such pressing topics as job hunting and working at a company.

[perfectpullquote align=”right” cite=”” link=”” color=”” class=”” size=””]As Japan moves to close its gender gap, there is growing demand for programs to give women with the skills and knowledge necessary to assume leadership roles in the public and private sectors.[/perfectpullquote]

Mentors also benefited from these relationships. According to a manager at a Tokyo company, being a mentor not only allowed her to meet new people but also prompted her to reflect on past experiences, bringing her a fresh perspective on the future. “As a leader and member of the women’s empowerment committee at my company, it was a great chance to think about how to contribute to the ongoing prosperity of society.”

To date, mentors have hailed largely from Japan offices of overseas companies. The program is now looking to increase the ratio of female leaders at Japanese firms.

Bringing Empowerment to the Forefront

Koike, a Liberal Democratic Party legislator and former cabinet member, spoke  on her experience as a journalist and as the first woman to head the Ministry of Defense. She applauded the recently passed legislation as an important step in advancing women’s empowerment by demonstrating that society as a whole must take an active part if progress is to be achieved.

Participants, presenters, and program sponsors during the annual conference on April 23, 2016. (Photo courtesy of the US-Japan Council)

Kuniya, who serves on the USJC board of councilors, recounted her path to anchoring Close-Up Gendai, a primetime news program on national broadcaster NHK from which she recently stepped down after 23 years. She expressed regret at not tackling gender equality on the show early on, hinting at the difficulty of shining a light on the issue as the lone woman at male-dominated production meetings. She expressed confidence that Japan is moving in the right direction in terms of women’s empowerment, though, noting that having more female leaders will positively affect the Japanese work culture.

Matsui, who put forward the concept of womenomics in her seminal 1999 report for Goldman Sachs, expressed a similar tone, noting the emergence of a new mindset among young male employees who often ask her advice on how to forge a healthy work-life balance.

A Call for Participants

As the Women’s Leadership Program heads into its fourth year it looks to build on past experiences in providing future leaders new opportunities. The program is currently open to university students as well as mentors in Naha, Osaka, Sapporo, and Tokyo. Those wishing to apply can do so via the program website.

• Learning from Silicon Valley: A Discussion Among US and Japanese Business Leaders
• Can “Womenomics” Save the Japanese Economy?
• Widening Opportunities for Japan’s Women