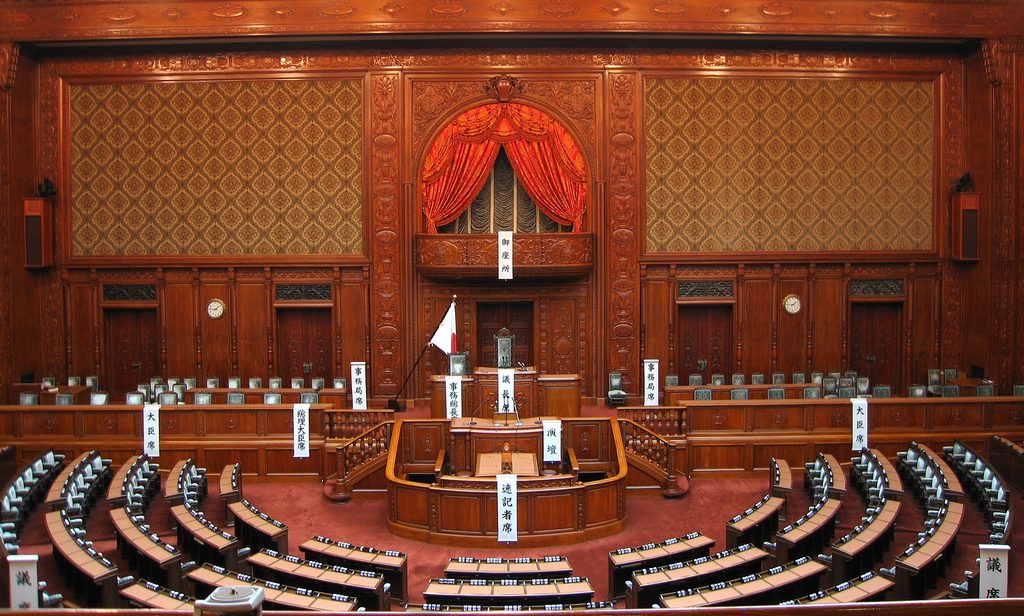 This article, “Beyond Article 9: Broader Considerations for Japanese Constitutional Reform,” is available through a partnership between Sasakawa Peace Foundation USA and Nippon.com. The article originally was published in Japanese on July 17, 2017, and in English on August 7, 2017. For the original posting, click here.

On May 3, Constitution Memorial Day, Prime Minister Abe Shinzō released a statement calling for the amendment of Japan’s postwar Constitution and conveying his hopes that a new charter will come into force by 2020. While Abe has made no secret of his wish to revise the postwar Constitution, his recent declaration went a step further than previous statements by setting a timeline. It also clearly specified the two goals of his revision campaign: explicit acknowledgment of the role of the Self-Defense Forces and a guarantee of free access to higher education.

Prior to the May 3 statement, deliberations within the Diet’s twin commissions on the Constitution had ground to a halt. The Liberal Democratic Party had promised to work for a consensus rather than push ahead on the strength of its supermajority, and partisan differences were proving unbridgeable. Abe’s strong statement of intent has breathed new life into the LDP’s efforts.

Any amendment or revision of the Constitution must be approved by two-thirds of the members of each chamber of the Diet before being submitted to the voters in a national referendum. Now, for the first time, the pro-revision forces appear capable of clearing the first hurdle. How should the voters who will make the final decision approach this important issue? In the following, I would like to reframe the amendment debate by looking at Japanese constitutional law in the context of current norms, trends, and challenges.

I would argue that the total number of rules required to govern a constitutional state does not vary greatly from country to country. If that is the case, then we must conclude that other countries enshrine more of those rules in their constitutions than Japan.

As an example, one might point to the absence of provisions governing political parties or the declaration of a state of emergency, which many other constitutions include. Similarly, while the charters of many nations specify the form that local government must take and go into considerable detail regarding the powers of local public entities in relation to the state, the Japanese Constitution sets forth only a few sketchy principles on the subject.

This could be considered a deficiency, or it might be considered part of a system in which the laws and interpretations of constitutional provisions play a major role in fleshing out the rather sparse legal framework established by the Constitution. For example, since the Constitution has no explicit provisions regarding the dissolution of the House of Representatives by the cabinet, Japan has proceeded on the basis of the government’s interpretation. The key role of Diet legislation can be seen in the sweeping political and administrative reforms that Japan has instituted since the 1990s, beginning with the 1994 election reform that replaced multiseat constituencies with single-seat districts in the House of Representatives. Since then, Japan has reorganized the cabinet, introduced a jury system, decentralized government functions, and effected fundamental changes in security policy merely by amending the pertinent laws. The problem is that if the Diet and the cabinet can use their powers to overhaul such bedrock systems at will, it calls into question the entire raison d’être of a constitution.

The brevity of the Constitution might also be considered problematic from the standpoint of limiting the power of government or of its organs. Arguably the biggest reason for the relative length of other democratic countries’ constitutions is the perceived need for various provisions aimed at preventing the accumulation or abuse of power.  Constitutionalism holds that the authority of government is derived from and limited by a body of fundamental law. From this standpoint, it might be desirable to augment our current Constitution so as to enhance its authority-limiting function.

Japan’s 1947 Constitution has never once been amended. As a statement of a nation’s basic governing principles, constitutions are supposed to be able to stand the test of time. That said, there is no question that their content is influenced by the specific political and social conditions prevalent when they were drafted, and those conditions are bound to change over time.

[perfectpullquote align=”full” cite=”” link=”” color=”” class=”” size=””]The situations and issues confronting Japan today are not the same as those the nation faced 70 years ago. Yet not one word of the Constitution has changed in response to the problems that have emerged over the past seven decades.[/perfectpullquote]

Clearly the situations and issues confronting Japan today are not the same as those the nation faced 70 years ago. Yet not one word of the Constitution has changed in response to the problems that have emerged over the past seven decades.

Other major democracies have been much more open to constitutional reform. Germany has modified its Basic Law 60 times since enacting it in 1949. France has amended its 1958 constitution 24 times. The United States has adopted constitutional amendments on 18 separate occasions since 1787 and 6 times since the end of World War II.

In terms of content, most of these revisions fall into three categories. The first type is intended to address governance issues, such as power imbalances or stresses between the different branches of government. For example, in 2000, France amended its constitution to shorten the term of the president from seven to five years with the aim of avoiding the gridlock resulting from a divided government. The second type of reform is intended to modernize government through the adoption of up-to-date governance systems and procedures. A typical example of such a change is the widespread institution of constitutional courts since World War II. The third category pertains to the establishment of new rights or other basic principles, such as environmental rights. In recent years a growing number of European countries have incorporated such principles as fiscal responsibility and abolition of the death penalty into their constitutions.

A particularly interesting example is France’s bid to use the constitution to address lingering gender inequality. Under the 1999 amendment calling for gender parity, new electoral laws were passed, including rules requiring equal and alternating representation on proportional-representation party lists and the pairing of male and female candidates in local elections. As a result, 48% of the council members elected in the 2015 local elections were women. These are just a few examples of the way other countries have used the amendment process to address new problems that emerged after the constitution was enacted.

Having lived through legislative gridlock under a divided Diet, many observers have raised questions about the powers of the House of Councillors under the Constitution. The House of Representatives alone selects the prime minister and has the power to pass a motion of no confidence, indicating that the cabinet’s collective responsibility is to the lower house. Yet the power of the House of Councillors to block legislation has created situations in which cabinets (such as that of Prime Minister Hashimoto Ryūtarō in 1998) have been forced to resign on account of an electoral setback in the upper house. Such political dysfunction seems like sufficient grounds for rethinking the constitutional powers of the upper house and perhaps the entire concept of bicameralism.

Another constitutional issue to consider is the lack of a strong system of judicial review, a mechanism whereby a court or courts are empowered to assess whether laws are in compliance with the Constitution and invalidate those that are not. In the 70 years since the Constitution came into force, the Supreme Court has handed down negative rulings on only 10 laws. This is a tiny fraction of the number of laws that have been overturned in other functioning democracies.

A closely related issue is the problem of electoral malapportionment in Japan. In election after election, the Supreme Court has ruled that the large disparities in the value of a vote are in violation of the Constitution. Yet it has never once invalidated an election for that reason. After 40 years of such rulings, the Supreme Court has yet to force a solution to this problem. The time has come for a serious conversation about the possible advantages of a constitutional court—-a standard feature of constitutional law today—over our current system.

A modern constitution should probably be equipped with principles for protecting the environment and individual privacy, issues that were not on the radar 70 years ago. The Constitution could also be leveraged to deal with the dilemmas facing an aging and shrinking population. Constitutional provisions establishing such principles as fiscal responsibility and intergenerational equity might smooth the way for a balanced-budget law or the creation of separate age-group electoral constituencies to ensure that younger voters are adequately represented in government. We might also consider incorporating the principle of gender parity, as France has done, given the fact that women still constitute only 20% of all Diet members.

Today, 70 years after the Constitution came into force, it falls to the people of Japan to deliberate and decide whether it is time to address its shortcomings. Let us transcend the political battle lines that have defined this debate for so long and approach the topic rationally and unemotionally in the light of the postwar Constitution’s merits and deficiencies and the challenges facing Japan in the twenty-first century.

Banner image: Chamber of the House of Representatives. Source: Kim Ahlström at Flickr.com.