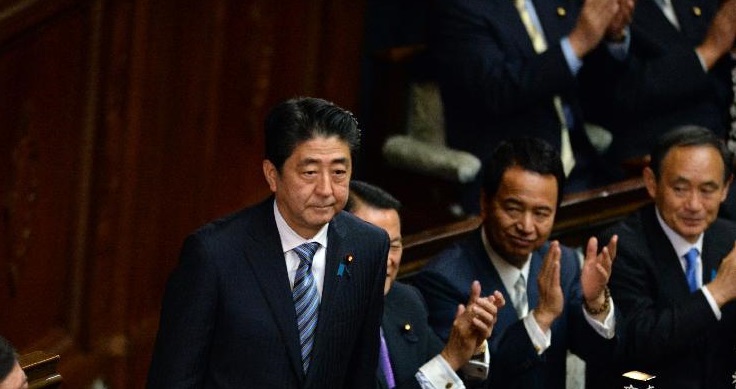 This article is available through a partnership between Sasakawa Peace Foundation USA and Nippon.com. Article was originally written and published in Japanese on September 8, 2015. For original posting, click here.

Prime Minister Abe Shinzō has won a new three-year term as president of the Liberal Democratic Party. The campaign for the LDP presidency was due to start on September 8, but as no other candidates filed by that date, the election was decided without the vote that had been scheduled for September 20. The LDP has selected a president 41 times over the years since it was formed in 1955, but this is only the seventh time that an incumbent has won unopposed. (This excludes cases where presidents were selected without a formal election by consensus or through arbitration by senior figures.) The previous LDP presidents who were reelected unopposed are Suzuki Zenkō, Nakasone Yasuhiro, Kaifu Toshiki, Kōno Yōhei, Hashimoto Ryūtarō, and Koizumi Jun’ichirō.

Abe’s new term as LDP president runs through the end of September 2018. Should he serve out this term at the party helm and continue to be prime minister for another three years, he will have been in power for almost seven years in total. (Abe’s first term as prime minister lasted slightly less than a year, from September 2006 to August 2007, but he resumed the premiership in December 2012 and has held the post since then.) The longest-serving prime minister of the post–World War II period was Satō Eisaku (2,798 days), followed by Yoshida Shigeru (2,616 days), Koizumi (1,980 days), Nakasone (1,806 days), and Ikeda Hayato (1,575 days). Abe currently ranks sixth by this measure and has already topped the 1,241-day premiership of his grandfather, Kishi Nobusuke, whom he respects highly.

In a political context that observers have described as “one strong party and many weak ones,” is the Abe administration really based on a firm foundation?

It is possible to interpret Abe’s unopposed reelection as reflecting favorable assessments of his administration’s economic, diplomatic, and security policies over the last three years. It may also be seen as showing a popular preference for maintaining the status quo. But in reality, this outcome is attributable to factors like the disarray of the opposition camp, as epitomized by the recent split in the Japan Innovation Party, and the lack of alternatives within the LDP and the weakening of the party’s internal organization.

The LDP formerly consisted of factions with varying strengths whose heads vied with each other for the party presidency. This rivalry enlivened the party, and though the LDP held control of the government for decades (with its president thus automatically becoming prime minister), the shifts in leadership among the rival factions served as a substitute of sorts for periodic changes of power between rival parties. But this faction-based setup was also seen as a source of problems, including political funding irregularities. The sweeping reform of the electoral system implemented in the 1990s (replacing the former multiseat constituencies with a combination of single-seat constituencies and proportional representation) greatly reduced the clout of the factions. As a result, the alternation of power among faction heads no longer serves as a substitute for alternation of power between parties. And the absence of a viable alternative to Abe can be said to demonstrate the shortage of potential leaders in the LDP.

Ishiba’s Decision Not to Run

All seven LDP factions expressed their support of Abe’s reelection as LDP president by the end of August. Noda Seiko, former chair of the LDP General Council, who belongs to no faction, expressed an interest in running, even though she had no realistic prospect of victory. In a webcast on August 27, she argued that uncontested elections are not good and that it is unhealthy for prime ministers to be chosen in an opaque manner. She kept up her efforts, but in the end she was unable to get the required endorsements from 20 other LDP legislators by the September 8 deadline.

The person viewed as the leading candidate to succeed Abe is Ishiba Shigeru, a senior figure who has held a variety of key posts in the cabinet (notably minister of defense and minister of agriculture) and the party. Ishiba was a candidate in the previous party election held in September 2012 and came in first in the initial round of voting by attracting votes from the party’s rank-and-file members, though Abe won in the final round (when voting was limited to the LDP’s national legislators). But on August 18 he decided not to run this time. This accelerated the movement toward the reelection of Abe.

A turning point for Ishiba was the cabinet and party leadership reshuffle that Abe carried out in September 2014. Ishiba was then serving as secretary general of the LDP, and he had hoped to stay on in this post. But Abe did not accede to this wish. Instead, the prime minister asked him to join the cabinet as minister in charge of security legislation. Ishiba in turn declined Abe’s offer. In the end, though, Ishiba decided against maintaining a confrontational stance; heeding the views of the moderates within his group, he accepted Abe’s offer of a cabinet post as minister for local economic revitalization. This flip-flop impaired his ability to stage a challenge in this year’s party election. Threats from the Abe faction that party members supporting Ishiba would be denied party endorsement in the next legislative election also had an effect.

What does the Abe administration hope to achieve in the years ahead? Speaking in the Tokyo suburb of Tachikawa on September 1, Abe underscored his intention to focus on domestic policies, continuing to pursue his “Abenomics” agenda for the economy, to promote regional revitalization, and to address the falling birthrate. Meanwhile, the government is scheduled to hike the consumption tax to 10% in April 2017.

On the diplomatic front, the Abe administration will seek to improve Japan’s persistently chilly relations with China and South Korea, pursue summit talks between Abe and Russian President Vladimir Putin in the face of the complications from the Ukraine situation, push for a successful conclusion to negotiations on the Trans-Pacific Partnership agreement, the linchpin of Japan’s economic diplomacy, and address the issue of relocating the Futenma US Marine base in Okinawa that has cast a shadow over efforts to strengthen the Japan-US alliance.

With a full plate of policy issues demanding his attention, Prime Minister Abe will need to show firm judgment and leadership regarding the extent to which he takes on constitutional reform, something he considers his lifework. The political calendar for the coming years includes a House of Councillors election in the summer of 2016 and a House of Representatives election no later than December 2018, when the terms of the current lower house members will expire. Abe is unlikely to have an easy time at serving out his new three-year term as LDP president.