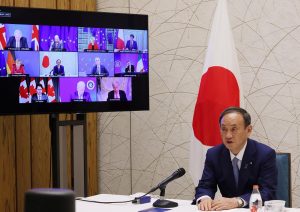 Prime Minister Suga attending the G7 leaders’ video call to discuss the crisis in Afghanistan on August 24, 2021. (Official Website of the Prime Minister of Japan and His Cabinet)

When Prime Minister Abe resigned suddenly last September, the LDP chose his chief cabinet secretary Yoshihide Suga to serve out the one year remaining in Abe’s last three-year term as LDP party president. The LDP is just weeks away from the September 29 party election that will decide whether Suga now gets to enjoy a three-year term of his own or becomes yet another name on a long list of short lived Japanese prime ministers.

Though in a seemingly strong position to prevail, mounting public criticism of his performance as prime minister as well as the LDP’s defeat in a number of recent local elections, most notably the trouncing its candidate suffered in a mayoral election in Suga’s home turf of Yokohama, have created a new atmosphere of uncertainty.

The decline in Suga’s public support has been relentless, the latest Mainichi Shimbun poll for example marking it at 26 percent, down four points from the newspaper’s previous poll. As public criticism of Suga has grown, so has the number of LDP politicians worried that voter unhappiness with him is putting their own reelection chances at risk. The chorus of LDP Diet member voices calling for a new face to lead the party into a lower house election that must be held no later than the end of October when the Diet’s four-year term expires is getting louder by the day.

Suga has no faction of his own, his source of power being the support given to him by the LDP’s big three — former Prime Minister Abe, Finance Minister Aso, and LDP Secretary-General Nikai. They are sticking with him, so far. But if they conclude that Suga’s continuation in office puts the party’s Diet majority at risk, they will desert him.

Given the logic of Japanese politics, where criticism of the ruling party does not necessarily make other parties more popular, there is little chance of a surge in support for the political opposition. Nonetheless, the LDP has good reason to worry, the concern being that a large number of voters may decide to lodge a protest vote against a Suga-led LDP, confident that the party will emerge from the election chastised but still in power. The possibility that the LDP with 278 of the 465 lower house seats and its coalition partner, the Komeito with its 29 seats, will lose the 73 or more seats that would cost it its majority seems remote but not impossible. And if the LDP “wins” but loses 50 or 60 seats in the process, its victory will come as small comfort to those incumbents who suddenly find themselves out of a job.

Suga’s problems continue to grow. As if the slowness of the vaccine rollout, the repeated declarations of a Covid state of emergency in Tokyo and elsewhere that have failed to produce positive results, and the absence of any evidence that Suga has a vision for the country’s future or the ability to communicate it to the public were not enough, there is now bubbling up criticism of his government for bungling the evacuation of Japanese and of Afghans out of Afghanistan who worked with Japanese organizations.

All told, Japan dispatched three Self Defense Force cargo planes and one government plane to deal with the evacuation. The first plane didn’t arrive at Kabul airport until August 25, several days after the American and European evacuation missions were in full swing. In addition, a plane left with only one (one!) Japanese evacuee.

The way the Japanese handled the evacuation not only compares unfavorably to the U.S. and Europe but it contrasts sharply with neighboring South Korea, which evacuated to Seoul not only Korean citizens but 390 Afghans who worked for the Korean government and for Korean organizations along with their family members.

So far, the Japanese government has managed to avoid extensive media reporting on its botched evacuation. The front-page story the Asahi Shimbun ran about the government’s mishandling of the evacuation on August 28 focused on the embarrassing, indeed appalling, fact that the Japanese government evacuated only one person. There was nothing in the story about how slow Japan was to decide what to do to help Japanese and Afghans who worked for them leave the country, and nothing about how all Japanese Embassy personnel left their posts on August 17, flying out of Afghanistan on a British airplane, leaving Japanese citizens and vulnerable Afghans behind.

Reportage about Japan’s failure to do more to deal with the Afghanistan evacuee crisis may increase, especially if one or another major foreign newspaper picks up the story. Then, replicating an all too familiar pattern, Japanese papers hesitant to incur the wrath of the government by criticizing it directly, will use its reporting of foreign criticism as a wedge to get the story out to the Japanese public. All this spells only further bad news for Suga.

Depending on what transpires over the coming days, there is an outside chance that Suga will not take the LDP into the lower house election, that with his support eroding he might be left with little choice but to withdraw from the party presidential race. And if he does run, he is going to be challenged by former Foreign Minister Fumio Kishida and Sanae Takaichi, a former Minister of Internal Affairs and Communications, and possibly Shigeru Ishiba, a former Defense Minister who lost to Suga in last year’s party presidential contest.

Half the votes in the election will be cast by the party’s lower and upper house Diet members. What has to be worrying for Suga is that the other half will be cast by the one million plus rank-and-file party members. LDP faction leaders do not have the power they once had years ago to mobilize the rank and file to vote in accord with their wishes. Given Suga’s low level of popular support, including among LDP members, there is no guarantee that he can prevail in the election even with the support of party bigwigs.

The important story embedded in current Japanese political developments is about far more than Suga’s chance of survival. Whatever happens in the next several weeks, whether Suga hangs on or someone else becomes prime minister, forces of political inertia and apathy, the weakness of Japan’s crisis management system, the dearth of imaginative and bold political leaders, and the failure to match talk of Japan’s global role and responsibilities with actions that involve a substantial degree of risk probably will continue without major change. Japan’s political culture, alas, is changing all too slowly.