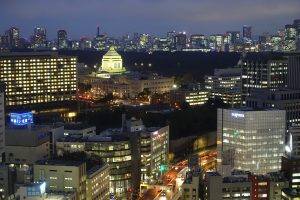 The scandal reemerged when it was discovered in February that documents related to negotiations between the Ministry of Finance (MOF) and Moritomo Gakuen–which Norihisa Sagawa, at the time the head of the bureau that oversaw the sale, told the Diet last year had been destroyed–still in fact existed. Then, on March 2, the Asahi Shimbun reported that versions of the ministry’s files related to the sale that were presented to lawmakers appeared to have been altered, removing references to the “special” nature of the case. The MOF admitted that there were discrepancies–leading soon thereafter to Sagawa’s resignation from the National Tax Agency, to which he had been promoted last year, on March 9–and on March 12 released the results of an internal investigation revealing that fourteen documents were altered, with references not only to the special nature of the sale removed but also references to politicians including the Abes and several other conservative lawmakers with links to the school.

In short, the ministry admitted that there had been an attempt to mislead the Diet regarding critical details of the land sale. While thus far there is no evidence to suggest that the cover-up had been orchestrated by political figures–in a press conference after the MOF investigation was announced, Finance Minister Taro Aso blamed the cover-up on Sagawa and lower-level officials at MOF’s financial bureau–the admission that documents were altered has both prompted questions from the press and lawmakers as to whether more senior officials ordered or knew about the cover-up and also reaffirmed suspicions that there was something improper about the land sale itself.

Thus far there is not a “smoking gun” implicating Abe, the first lady, or another senior politician in either the sale or the cover-up.

Thus far there is not a “smoking gun” implicating Abe, the first lady, or another senior politician in either the sale or the cover-up. But MOF’s admission that a cover-up did indeed occur will keep press attention focused on the issue, which could lead to additional revelations, and has led opposition parties to boycott parliamentary deliberations. The latter has prevented passage of the 2018 budget by the upper house as well as the 2018 tax bill and risks preventing the passage of the government’s work reform bills (which have already been undermined by the government’s use of improper survey data to sell the reforms) and even constitutional revision.

Whether the Moritomo Gakuen scandal critically undermines Abe will depend on how the public reacts. It is too early to judge just how much the public will punish the Abe administration for the scandal. Only three major polls– NHK, the Yomiuri Shimbun, and Jiji Press –have been conducted since Sagawa’s resignation on March 9, and thus do not reflect the most recent developments in the controversy. Nevertheless, these most recent polls record a sizeable change in the Abe government’s net approval rating, from roughly +13% to +6%. In both polls the headline approval rating fell and the disapproval rating rose, with a total swing of -12 in Yomiuri and -6 in NHK. In Jiji’s poll, which was conducted March 9-12 and therefore partially captures the response to MOF’s confirmation that documents had been altered, the drop is even more pronounced. The government’s approval rating fell 9.4 points to 39.3% and the disapproval rating rose 8.5 points to 40.4%, a combined swing of -17.9 against the government.

With the release of the Jiji poll, the cabinet’s average net approval rating in Japan Political Pulse’s moving average fell to 2.5%, the lowest level since last year’s general election. In short, even the first signs that the circumstances surrounding the Moritomo Gakuen were worse than initially believed led to a dip in the government’s support. Significantly, even as the disapproval rating in Yomiuri rose six points to 42%, the share of disapprovers who cited “unable to trust the prime minister” as the main reason for disapproving rose from 42% in February to 51% in March. The trust gap is by far the most common reason cited by respondents for not supporting the administration.

Other questions suggest that trust in the government regarding the land sale is low. The Yomiuri poll found that 80% of respondents think that the government’s response to allegations that MOF altered documents was adequate. 71% of respondents believed that it was necessary for Sagawa to be summoned before the Diet to explain why he testified in 2017 that documents related to the sale had been destroyed. NHK’s findings were a bit more ambivalent. Asked whether it was appropriate for Sagawa to have resigned, 42% said it was “natural” for him to do so and 17% said it was unnecessary – but 30% could not say. Meanwhile, NHK asked only what the public thought about MOF’s handling of the allegations, but not the Abe government’s: 74% said they were completely (45%) or somewhat (29%) unconvinced by MOF’s response, while only 16% said they were entirely (2%) or somewhat (14%) convinced.

The most recent polls suggest that there is a level of public distrust in the government–dating back to the initial emergence of Abe’s influence-peddling scandals last year–that could grow over the coming weeks.

The Fuji/Sankei Shimbun poll–not included in the JPP moving-average since it does not provide sufficient information on methodology, including sample size–nevertheless provides some useful data points for assessing public opinion as it processes the latest developments. The Fuji/Sankei poll found that 88% thought that Sagawa should testify before the Diet. More significantly, 71% of respondents thought that Aso should resign as finance minister: 17.9% believed he should resign immediately, while 53.1% said he should resign if the alterations to MOF documents were confirmed (the poll was conducted before MOF’s admission on 12 March).

The most recent polls suggest that there is a level of public distrust in the government–dating back to the initial emergence of Abe’s influence-peddling scandals last year–that could grow over the coming weeks. If distrust grows among not just independents, who are already disinclined to trust the prime minister, but also among supporters of the LDP and Komeito it will be difficult for Abe to mount a reelection campaign, and Japan’s long-serving prime minister could find himself a lame duck by the summer.