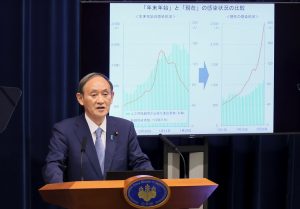 Prime Minister Suga at a press conference regarding COVID-19 on July 30, 2021. (Official Website of the Prime Minister of Japan and His Cabinet)

The Tokyo Metropolitan Assembly Election held on July 4 delivered a devastating shock to Prime Minister Yoshihide Suga and the Liberal Democratic Party (LDP). While the party did increase their number of seats from 25 to 33 at the assembly, regaining the position of the party with the largest number of seats, it was a terrible disappointment for the LDP as they had hoped to gain close to, if not more than, 50 seats. It was also a shock to the LDP that the Tokyoites First Party, established by Governor Yuriko Koike, fared much better than anticipated prior to the election.

The result of the Tokyo assembly election signaled a high level of frustration over medical, social, and economic difficulties, which Japanese people have been having since the COVID-19 crisis began in January 2020. It is certainly not fair to place full blame on the Suga cabinet and the LDP for all the difficulties, as the COVID-19 crisis is a global issue, but it is only natural for Japanese citizens to do so as the government does not seem to have been effectively protecting them from the virus.

For example, even though compared to international levels the number of new COVID-19 cases in Japan has been suppressed to relatively low levels, the Suga cabinet was extremely slow in starting mass vaccination efforts. Japanese people saw a mismatch between the Suga cabinet and local governments in terms of supply and demand of vaccine doses, and the on-and-off again of multiple issuances of COVID-19 emergency declarations as evidence of ineptness of the Suga cabinet. The situation was exacerbated by PM Suga’s difficulty in effectively communicating with the Japanese public about his intentions.

Going into August, Prime Minister Suga has an uphill battle to continue as president of the LDP beyond September, when his current term is up. His best-case scenario has been to position himself to win the nominal LDP presidential election by becoming victorious in a snap Lower House election prior to the party presidential election. However, timing of a snap Lower House election has become increasingly tricky as the LDP lawmakers, particularly the rank-and-file members, have become concerned with the high level of frustration among Japanese voters, as was expressed in the Tokyo Metropolitan Assembly election. A senior LDP lawmaker lamented following the assembly election that “there is nothing to be optimistic about in the upcoming Lower House election.”

Unfortunately for Prime Minister Suga and the LDP lawmakers, the frustration Japanese citizens are feeling will likely linger on for some time, as the government measures to suppress new COVID-19 infections have turned out to be ineffective. On July 31, the number of new cases in Tokyo reached 4,058 and the number of new cases in Japan reached 12,341.[1] Both numbers were a record-high for Japan. While the frustration levels of many Japanese has been somewhat tamed due to the historic gold medal rush by Japanese athletes at the Tokyo Olympics, these feelings of dissatisfaction are likely to return at elevated levels as soon as the Olympics games are over on August 8. The number of new COVID-19 cases are expected to remain high and in the worst-case scenario, possibly continue to grow for some time.

Under such circumstances, the timing of the next Lower House election and the LDP presidential election seem not certain even for the most informed and astute political observers in Tokyo. It is possible that Prime Minister Suga, and the LDP brass themselves, are having an extremely difficult time gauging the COVID-19 situation, and therefore, coming up with the best plan for the next Lower House and LDP presidential election is a challenge they do not yet know how to tackle.

The LDP rules require an election date for the party’s presidency be determined at least one month prior to the conclusion of the current president’s term. Some LDP lawmakers argue that the party presidential election date should be set toward the end of September and that Prime Minister Suga should decide when to hold the Lower House election. While the term for the current members of the Lower House will end on October 21, Prime Minister Suga can call a snap election without waiting for the term to be fulfilled. Those LDP lawmakers argue that the party presidential election can be pushed back to a later date if Prime Minister Suga decides to hold a snap election in September.

An unknown factor is whether Tokyo Governor Yuriko Koike plans to return to national level politics by running for a seat in the next Lower House election. The Tokyoites First Party, which Koike serves as special advisor to, demonstrated its strong support base at the Tokyo Metropolitan Assembly election. Koike can run in Tokyo’s 9th district where former LDP lawmaker, Isshu Sugawara, resigned over violation of the election law in June. This is next to Tokyo’s 10th district, her old district as a Lower House lawmaker. Alternatively, with an aspiration of becoming a national level party, the Tokyoites First party can have multiple candidates in metropolitan areas. Koike can also team up with other governors to further gain political influence. While Koike has a close working relationship with Toshihiro Nikai, Secretary General of the LDP, PM Suga met with Koike for an hour on July 25 at his official residence.

The LDP’s Party Presidential Election Committee will hold its first meeting on August 3 to begin its deliberation on timing of the party presidential election. While the committee does not have actual power to decide the date, it signals the fact that the political calendar is getting close to a critical period to determine whether Prime Minister Suga will be able to continue as the national leader. Chances are that at this particular point with no serious challengers to the LDP presidency combined with fragmented opposition parties, Prime Minister Suga will muddle through to his new full term as the party president, providing the smooth rollout of vaccines continues and an explosion of new COVID-19 cases is prevented. However, if COVID-19 cases get out of control, a political crisis might emerge for Prime Minister Suga.