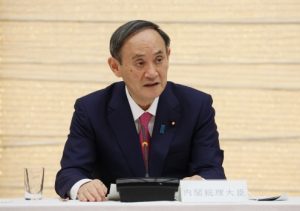 Prime Minister Suga at the 53rd meeting of the Novel Coronavirus Response Headquarters on January 22, 2021. (Official Website of the Prime Minister of Japan and His Cabinet)

Prime Minister Suga’s best-case political scenario is that he will successfully suppress expansion of COVID-19, while at the same time revitalizing economic activities as quickly as possible. Additionally, he will hold the Tokyo Olympics with both Japanese and foreign spectators in attendance, as planned. Finally, he will secure a longer term as prime minister by dissolving the Diet and wining big in the general election taking advantage of his administration’s achievements. By protecting citizens’ health, promoting economic well-being, and hosting international festivities, Mr. Suga could perhaps even signal the end of the global pandemic disaster in Japan.

However, Prime Minister Suga’s best-case political scenario seems altogether too optimistic. The current prevailing tone in the Japanese press is very pessimistic that Mr. Suga has squandered the tremendous amount of political capital he inherited from his predecessor Prime Minister Abe in just four months. Mr. Suga’s best-case political scenario seems like a mirage in the desert, which a wondering traveler would never be able to reach.

First, Prime Minister Suga seems to have mishandled the COVID-19 crisis. Former Prime Minister Abe had been successful in preventing COVID-19 case counts from exploding, despite the fact that Japan had enjoyed relatively relaxed social restrictions imposed on its citizens. However, the number of new national daily COVID-19 cases went over 1,000 for the first time in early November, a month and a half after Prime Minister Suga assumed office. Furthermore, Mr. Suga appears ineffective in his attempts to stop the upward trend as the number topped 2,500 in the beginning of December, 3,000 in the middle of December, and 4,500 by the end of December. This trend continued in the new year.[1] The number of new national daily cases reached 7,882, the highest level ever in Japan, on January 8.[2]

During the aforementioned period, Prime Minister Suga seems to have lost control of the COVID-19 situation. Mr. Suga introduced the “Go To Travel” initiative as a key policy to stimulate local economies by encouraging people to travel domestically with discount coupons. Prime Minister Suga continued to push the “Go To Travel” campaign, while adamantly denying that the campaign was behind the spread of the virus. He maintained this position until he was forced to temporarily stop the campaign on December 14, due to concern over an observed rapid decline in citizen’s support for him. Mr. Suga was forced to reluctantly reintroduce an emergency declaration to Tokyo, Saitama, Chiba, and Kanagawa prefectures on January 7, 2021. He was defensive at a subsequent Upper House budget committee debate on January 27 when he was asked about the reasoning behind his expectation that the COVID-19 situation would definitely improve within a month.

Prime Minister Suga also seems to have lost sight of the delicate balance between prevention of infections and promotion of economic activity, which he declared as his priority in his address following the victory at the LDP presidential election on September 14, 2020. Restaurant owners and employees particularly got frustrated as they felt obliged to comply with the government’s requests, which seemed to lack consistency. Furthermore, in his attempt to defend the “Go To Travel” campaign, Prime Minister Suga inadvertently criticized restaurant owners and employees by pointing out that restaurants were the source of the virus spread. It was sensationally reported that a well-known restaurant chain owner openly expressed his anger toward Prime Minister Suga in a press conference in a disrespectful way.

Mr. Suga also found himself in a bind with regard to the Tokyo Olympics, as Mr. Richard Lloyd Parry, the Asia editor of The Times who lives in Tokyo, published an article titled, “Japan looks for a way out of Tokyo Olympics because of COVID” reporting that Prime Minister Suga’s administration had given up on the idea of holding the Tokyo Olympics. The article begins by stating that “The Japanese government has privately concluded that the Tokyo Olympics will have to be cancelled because of the coronavirus, and the focus is now on securing the Games for the city in the next available year, 2032.”[3] While Mr. Manabu Sakai, Deputy Chief Cabinet Secretary, and Ms. Seiko Hashimoto, Minister for Tokyo Olympics and Paralympic games, denied the report, it had already further damaged perceptions of Prime Minister Suga’s handling of the COVID-19 crisis in Japan.[4]

It is true that the approval rate of Prime Minister Suga has plummeted from roughly 70% at the beginning of his administration in September, to 39% (Yomiuri), 34.8% (ANN), 33.0% (Mainichi), and 33% (Asahi) in January.[5] Citizens’ support for Prime Minister Suga is dangerously low, but can be turned around, as the drop clearly reflects frustration about continuous spread of the coronavirus and stagnation of the economy. In other words, it all hinges on the state of the COVID-19 crisis in the coming months. This is why Prime Minister Suga appointed Mr. Taro Kono, a maverick politician, who is not afraid of fighting red tape, as the newly installed head of the administration’s rapid inoculation efforts. The latest FNN polls show citizens’ expectations for vaccines to turn the COVID-19 crisis around is very high at 77.2%.[6] Additionally, in the same polls, citizens’ hope for Mr. Taro Kono, the inoculation tsar, is also very high at 77.9%.[7]

Additionally, while the Prime Minister can appear defensive in response to criticism and attacks in the Diet sessions, he may not be quite as vulnerable as some media reports would like to suggest. It does not look he has been chased into the corner to resign any time soon. It also does not look like there is strong enough anti-Suga sentiment within the LDP to hold a new party leadership election to remove him from office.

Mr. Fumio Kishida and Mr. Shigeru Ishiba, the two challengers to Mr. Suga, have lost momentum after they lost to Mr. Suga in the LDP presidential election last September. Mr. Taro Aso, Deputy Prime Minister, is 80 years old and is not expected to try to become Prime Minister again. Mr. Shinzo Abe, who had been whispered about as possibly returning as Prime Minister, is currently damaged with scandals. Mr. Suga continues to have a generally good relationship with Mr. Toshihiro Nikai, a powerful old guard figure within the LDP, who essentially played the role of king maker last September and still offers a strong support base for Prime Minister Suga’s grip on the party.

Putting aside the chance that Prime Minister Suga could make a personal decision to resign for some unknown reason, the biggest factor to consider in a possible party leadership change is exactly when Mr. Suga will call a general election and what the results will be. This is a delicate decision for Mr. Suga to make as the LDP under Prime Minister Abe’s leadership continually won big in the Lower House. While it could be quite possible for the LDP-Komeito coalition to win the simple majority of 233 seats, it may look like a relative defeat when compared to the 280-290 seats which Prime Minister Abe consistently led the party to secure. This is a dilemma for Prime Minister Suga, but there is also a strong feeling within the LDP that it is an extremely difficult task for any politician to prevent COVID-19 from spreading while simultaneously stimulating economic activity. As a result, nobody within the LDP expects Prime Minister Suga to win as big as Prime Minister Abe used to.  He may be able to continue to hold party leadership even if the party loses some seats.  In the meantime, Prime Minister Suga will continue to muddle through, hoping Mr. Kono’s efforts for mass inoculation efforts will succeed in time.

[3] Richard Lloyd Parry, “Japan looks for a way out of Tokyo Olympics because of Covid,” the Times, January 21, 2021, https://www.thetimes.co.uk/article/japan-looks-for-a-way-out-of-tokyo-olympics-because-of-virus-lf868xfnd.