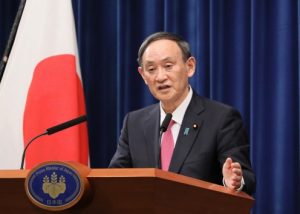 Prime Minister Suga at a press conference regarding COVID-19 on December 25, 2020. (Official Website of the Prime Minister of Japan and His Cabinet)

It was just three months ago that Prime Minister Suga won the party leadership by outmaneuvering his younger opponents, Mr. Shigeru Ishiba and Mr. Fumio Kishida.  Prime Minister Suga enjoyed approval ratings as high as 70% as the successor of Prime Minister Abe, whose popular support soared after he announced his resignation due to health concerns. However, that now sounds like a long time ago.

Prime Minister Suga’s political stock has been declining at an alarming speed. The latest NHK poll, which was conducted between December 11 and 13, sent a shock wave through the LDP leadership. The approval rating of the Suga administration took a 14 percentage-point nosedive to 42% from 56% in the previous poll taken between November 6 and 8. The disapproval rating of the Suga administration shot up 17 percentage points to 36% from 19% in the same polls.[2]

The biggest reason for the sharp decline in support of Prime Minister Suga is what the public perceives as his inability to prevent COVID-19 from spreading and keeping economic activity going. Prime Minister Suga began what he called a “win or lose three-week period” on November 25. However, during those three weeks, the seven-day average of new COVID-19 cases increased from 2,027 to 2,587.[4] Asahi Shimbun described on December 16 that the “win or lose three-week period” had essentially been a loss, which was the day the three week period ended.[5]

Yasutoshi Nishimura, Minister in charge of the government’s COVID-19 response, admitted at the end of the three-week period that “Unfortunately, (the number of new cases) have not showed a declining trend.”[6] Medical and infectious disease experts, including Dr. Shigeru Omi, chairman of the government panel of COVID-19 experts, warned that the “situation may get worse in the new year unless there is a unified message from the national and local governments and the citizens get united.”[7]

Prime Minister Suga seems to have temporarily lost his political compass when he made the complete reversal to stop the “Go To Travel” campaign. The campaign had been designed to boost support to travel and leisure industries, which have been badly damaged by the COVID-19 crisis. The travel and leisure industry is a major support base of Mr. Toshihiro Nikai, the powerful LDP Secretary General, who is also chairman of the All Nippon Travel Agents Association. Mr. Nikai is naturally interested in keeping the subsidy programs for the industry. Mr. Nikai, who played a major role in making Mr. Suga the LDP president in the party leadership election in September, was reportedly furious when Prime Minister Suga announced the stoppage of the “Go To Travel” campaign.

Prime Minister Suga seems to have lost an opportunity to call a snap election this past fall to solidify his leadership position within the LDP when he was riding high in the polls on Prime Minister Abe’s coat tails. Now, he finds himself in a position where he must carefully gauge the timing of a general election, maintain a reasonably high level of public support, and secure the support of Mr. Nikai and other old guards to keep his hold over the rank and file LDP law makers. All of this has to be achieved on top of keeping a fine balance between preventing the virus from spreading and stimulating economic activity. That is no easy task for sure.