Prime Minister Suga Battles on with Vaccinations and the Olympics 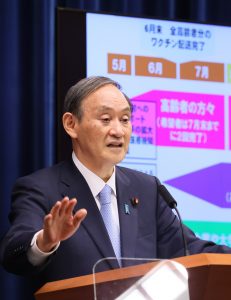 Prime Minister Suga is facing a tough headwind. Approval for his cabinet among Japanese citizens in May has significantly declined across all major polls as compared with April (see table 1). Some declines are very steep. In the latest FNN poll, approval plummeted 9.3 percentage points to 43.0% from 52.3% in April. Similarly, in Mainichi’s latest poll in May, approval fell 9 percentage points to 31% from 40%. In the newest poll by Nikkei, conducted between May 28 and 30, approval took a 7 percentage point nosedive to 40% from 47%. Furthermore, in all major polls, disapproval of Prime Minister Suga’s cabinet has surpassed approval. The latest polling results regarding his cabinet are disconcerting to Prime Minister Suga, who is known to pay a particularly high level of attention to polling data. 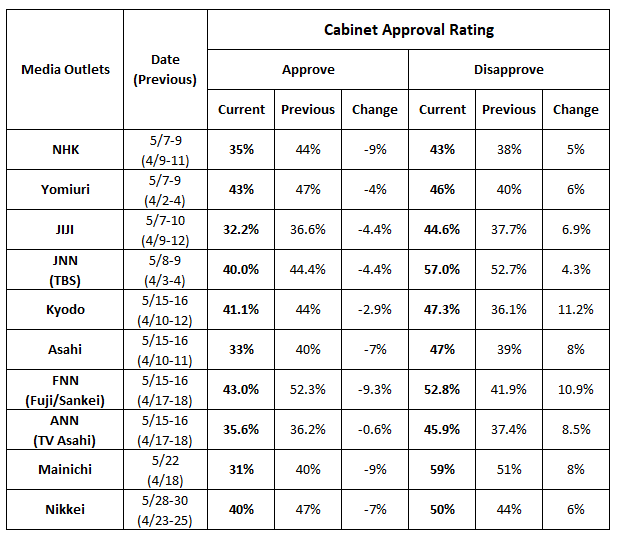 Prime Minister Suga’s difficulty in effectively suppressing new cases of COVID-19 infection has directly affected the declining approval of his cabinet. He introduced the third COVID-19 state of emergency to Tokyo, Osaka, Hyogo and Kyoto from April 25 to May 11. It was intended to curb the increase during the Golden Week holidays, but it was soon extended to May 31. Moreover, other prefectures have been incrementally added to the list. Prime Minister Suga was forced to extend the state of the emergency again to keep the following 10 prefectures under the state of emergency until June 20, Tokyo, Osaka, Hyogo, Kyoto, Aichi, Fukuoka, Hokkaido, Okayama, Hiroshima and Okinawa.[i] In the eyes of Japanese citizens, Prime Minister Suga seemed to not be doing quickly enough to stop new cases of infection. In the Mainichi poll, 69% of Japanese citizens do not approve of the Suga administration’s COVID-19 measures, whereas only 13% approve of them.[ii]

At this point, the best-case scenario for Prime Minister Suga to extend his term as LDP president beyond September, which is when the current term is up, and thereby continue as prime minister, is to 1) ramp up vaccine rollout and suppress new cases of infections, 2) successfully hold the Tokyo Olympics and Paralympics this summer even in a limited scale, and 3) score a respectable victory in the general election to gain political legitimacy.

Vaccine rollout presents both a severe challenge and a great opportunity for Prime Minister Suga. First, the Suga cabinet had experienced great difficulties in importing large doses of vaccines, setting up mass vaccination centers, and securing medical experts to administer a large number of shots. Prime Minister Suga appointed Administrative and Regulatory Reform Minister Taro Kono, who was known to have unconventional energy to get things done, to a new ministerial position in charge of vaccine rollout in January. However, he lacked resources and organizational support to dramatically accelerate the pace of vaccination. As a result, NHK polls show that 82% of Japanese citizens think the government’s vaccination progress is slow, whereas only 9% see it favorably.[iii]

However, the Suga cabinet has gradually begun to secure enough doses of the vaccine, establish mass vaccination centers, and mobilize medical experts to manage the mass vaccination process. Prime Minister Suga announced that he would complete vaccinations of people over the age of 65 by the end of July. He also announced his goal of achieving one million shots a day, when two mass vaccination centers operated by the Self-Defense Forces were established in Tokyo and Osaka on May 24. Ramping up vaccine rollout for the elderly holds the key for improving citizen’s views on the Suga administration because the elderly have higher risks of severe illness from COVID-19, they tend to sway public opinions as they are closely in tune with television and newspaper reports, and they exercise their voting rights at higher rates than younger people.

Despite the political headwind, Prime Minister Suga still has a chance to turn around his political standing, if the government can manage to complete vaccinating the elderly, as promised, and to suppress an increase of new infections in the near future. Of course, if he manages to make improvements in these two areas, Japanese citizens’ attitudes toward holding the Tokyo Olympics and Paralympics should greatly improve. Mr. Yukio Edano, leader of the CDP, is currently under heavy criticism by Japanese citizens for saying “Prime Minister Suga totally relies on vaccinations (for his political future)” on the radio. Mr. Edano seems to not be in tune with the importance and urgency which Japanese citizens, particularly elder voters, feel about vaccination.

If Prime Minister Suga chooses to resign as Prime Minister, an LDP leadership election will need to be held before the general election. Many ambitious politicians, such as former Policy Research Council Chief Fumio Kishida, Administrative and Regulatory Reform Minister Taro Kono, Foreign Minister Toshimitsu Motegi, Economic and Fiscal Policy Minister Yasutoshi Nishimura, Chief Cabinet Secretary Katsunobu Kato, and Policy Research Council Chief Hakubun Shimomura, are carefully calibrating party politics for their chances to run for party leadership. However, chances are that Prime Minister Suga will choose to hold a snap election, as he strongly feels that voters should judge him based on his performance during the most challenging domestic and international situations. He may be able to win enough votes by legitimizing the cancellation of the Games by declaring that he came to the conclusion that “protecting human lives are more important than holding the Olympics.”

If a snap election is called, influential leaders in the LDP, who control large voting blocks, such as former Prime Minister Shinzo Abe, Deputy Prime Minister Taro Aso, and Secretary-General Toshihiro Nikai, are expected to support Prime Minister Suga to win a snap election. Despite serious differences between Abe and Aso on one hand and Nikai on the other, going back to a Prime Minister carousel, as a result of an internal power struggle, is not an option for LDP leaders, particularly when there are no strong candidates to succeed Prime Minister Suga. Moreover, there is strong concern among the LDP leaders that a snap election under the current political situation is a serious uphill battle for the party this time. Taro Aso, who is known to usually carry an air of optimism, recently warned members of his faction that “a snap election, which is going to happen sometime before the fall, is like a “dark alley.” You must be very careful.”

However, a snap election in early July is unlikely, as Japanese citizen’s confidence in Prime Minister Suga and the LDP has taken a significant hit over the public health crisis. Additionally, Komeito, LDP’s coalition partner, has no appetite to do so. Despite the fact that the Komeito maintained all 23 seats in the last three Tokyo Assembly elections, the upcoming Tokyo Assembly election is regarded as a tough one for the party. The party leadership would like to focus solely on the Tokyo Assembly election as their vote-getting machine is less effective this time due to a combination of an aging Soka Gakkai membership and less than ideal campaign activities due to COVID-19.

Prime Minister Suga is focusing on ramping up mass vaccination for the elderly to restore citizens’ confidence in his leadership and to pave the way for the successful Olympics and Paralympics. If he can make progress on these two fronts, the prospect of his continued national leadership after September will greatly improve. Introduction of the state of emergency to 10 prefectures until June 20 is a reflection of Prime Minister Suga’s determination to hold on to his political power beyond September. Prime Minister Suga may still successfully navigate this difficult path. However, the media and societal pressure is mounting in addition to the pandemic and the Olympics being not fully in his control. If the current situation continues, sharks will begin to circle soon.