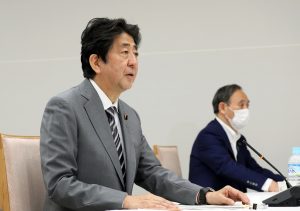 Katsuyuki Kawai, former justice minister appointed by Prime Minister Abe, and his wife, Anri Kawai, a member of the Upper House, were arrested on June 18th. The one-time foreign policy advisor to Abe and his wife were in hiding in a hotel room at the time of arrest. According to the Tokyo Public Prosecutor’s Office, the couple paid a total of 25.7 million yen ($240,000) to 94 people to get Anri elected to the Diet Upper House last summer.

Anri Kawai is said to have received about 150 million yen ($1.37 Million) in the form of a campaign fund contribution from LDP headquarters. The Prosecutor’s Office is reportedly investigating whether the alleged vote buying money may have come from the funding the LDP provided to Anri’s campaign. The size of the contribution is unusual but not illegal, standing at about ten times as large as the usual amount provided in support to LDP candidates.

As a matter of fact, Kensei Mizote, a former LDP Upper House lawmaker from the same Hiroshima district as Anri Kawai, received just 15 million yen ($137,000). Incidentally, since Mizote has criticized Abe by saying he is “a man of the past,” Anri was seen to have been selected by the party leadership to beat Mizote by dividing LDP supporters. Last summer, Anri was elected, but Mizote lost his seat, garnering significantly fewer votes compared to the previous Upper House election.

The size of the contribution to Anri Kawai`s campaign combined with special ties between Katsuyuki Kawai and Abe has led to questions of whether Abe approved a special contribution to Anri`s campaign. Due to the serious nature of the allegations, speculation has emerged that Abe may leave the Prime Minister’s office much earlier than the end of his term in September 2021. A recent Reuters article entitled “Arrest of former Japanese minister could hasten PM Abe`s departure,” quotes an LDP lawmaker stating that “He (Abe) probably cannot last until the year-end.”[1]

Abe`s popularity has been on the decline over his handling of the COVID-19 crisis (despite the relatively low number of infected cases in Japan), depressed economic activity resulting from the declaration of a state of emergency, and botched efforts to appoint Hiromu Kurokawa, former head of the Tokyo Public Prosecutor’s Office, to be the next prosecutor-general. The scandal of Katsuyuki and Anri Kawai on top of other existing political and economic hardships looks like too much for Abe to overcome to those who are predicting his early exit.

However, at least in the short-run, the above does not look like the course which Japanese politics is likely to follow at this time. In this respect, there are four elements to be considered.

First, regarding speculation that Abe may dissolve the House of Representatives following the LDP’s leadership appointments in September, Abe may not have the political appetite to hold yet another national-level election before his term is up next September. The party’s centrifugal force with Abe at its center has been weakened by recent political scandals and jockeying for position in the post-Abe LDP. An additional and potentially difficult election might indeed blemish his prior nine consecutive victories in important elections. The Japan political calendar is also very crowded in the fall, leaving the window of opportunity for a national election quite narrow.

An important footnote is that Abe’s succession plan is not clear. The focus is whether Abe will make it a political priority to ensure Fumio Kishida, Policy Research Council Chair and widely regarded as Abe’s favorite, is his successor as Prime Minister. Abe may orchestrate a smooth transfer of power to Kishida after extending the term of the members of the House of Representatives by dissolving the House or resigning from the Prime Minister’s office. Other candidates, such as Defense Minister Taro Kohno, Foreign Minister Toshimitsu Motegi, or Chief Cabinet Secretary Yoshihide Suga, may emerge as frontrunners depending on Abe’s plan to block Shigeru Shiba, one of the strongest opposition forces within the party, from succeeding him as Prime Minister.

Second, the ongoing COVID-19 crisis may require Abe to stay in office to deal with the pandemic till it is under full control. While Japan has been experiencing relatively low numbers of infection, currently at 18,013 cases, the pandemic threat in Japan is far from contained.[2] The problem is nobody knows exactly why Japan has been comparatively successful in preventing the spread of the virus despite the fact the nation has adopted relatively unrestrictive measures to combat it. The LDP is launching an effort to investigate Japan’s handling of the COVID-19 threat and to establish a fundamentally new preparedness regime against future pandemic diseases with the cabinet office at the center.[3] Containing COVID-19 is critical because it is directly connected to the Olympic Games next summer, which will be discussed in more detail later.

Third, the U.S. presidential election may not allow Abe an early exit. There is a strong consensus among the ranks of the LDP leadership that only Abe can successfully manage the relationship with President Trump. There is room for debate on whether the “friendship” between Abe and Trump has borne actual political fruit regarding difficult policy matters between the two countries, including North Korean nuclear threats, China’s expansionist behaviors near Japan, and host-nation support costs. However, many in the LDP leadership think that the U.S. presidential election is an important reason for Abe to stay on as Prime Minister. If in the coming months it becomes clearer that former Vice President Joe Biden will win in November, this element becomes less important.

Lastly, the most important element is the Olympic Games which have been postponed till summer 2021. While there is doubt among political leaders on whether the Olympics can be held next summer due to the COVID-19 crisis, Abe strongly hopes that the games will take place in 2021. After all, having the games in Tokyo would be one of the most significant legacies of his administration. Therefore, as long as there is the chance of holding the Olympic Games in Tokyo next summer, it is unlikely that Abe himself will leave the Prime Minister’s office.

All of these elements are connected and interact in complex ways. The next thing to watch is Abe’s appointment of the party’s senior leadership in September. The single most important appointment in terms of analyzing where the Abe administration is headed in the future is the appointment of Secretary General. Specifically, whether or not the powerful old guard, Toshihiro Nikai, will continue on holds particular significance.

This is likely the last cycle of LDP party leadership appointments to be made by Abe. The question is whether Abe would like to stabilize the cabinet and political base which has been mired by recent scandals by keeping Nikai in the Secretary-General position or to lay a renewed foundation for the future by bringing in a new leader, such as Kishida, possibly indicating his successor. Abe and Nikai had dinner in a restaurant in Akasaka on June 24 for the first time in five months. There is no doubt that they talked about LDP leadership appointment in September.