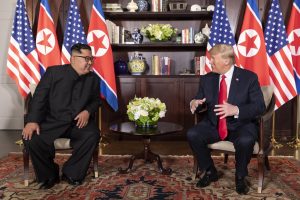 When United States President Donald Trump met North Korean leader Kim Jong Un in Singapore on 12 June, Prime Minister Shinzo Abe and the Japanese people watched warily to see whether the U.S. president would safeguard Japan’s interests vis-à-vis its adversary on the Korean peninsula. After all, during the three months between Trump surprising the world by accepting Kim’s invitation to meet and the summit, Abe spoke with Trump on the phone several times and traveled to the U.S. twice to consult with the president about the summit and seek assurances that he would keep Japan’s concerns about North Korea – not only the unresolved issue of North Korea’s abductions of Japanese citizens but also its chemical and biological weapons, its nuclear weapons, and its short- and intermediate-range ballistic missiles – in mind when he met Kim.

It is likely that a majority approves of the historic first meeting between a sitting U.S. president and a North Korean leader.

However, at the same time, the Japanese public’s skepticism about the U.S. diplomatic effort has grown following the summit. For example, in the Kyodo News poll conducted 16-17 June, 77.6% said that they do not think that complete denuclearization of the Korean peninsula can be realized; only 16.4% said that it can. Other polls show deep pessimism about the prospects for eliminating the threat posed by North Korea’s nuclear weapons and ballistic missiles. In Asahi, only 26% were optimistic about North Korea’s abandoning its nuclear weapons, 66% were not; in Yomiuri, only 24% thought that nuclear weapons and ballistic missile issues could be resolved, 64% did not; and in the Mainichi Shimbun’s 23-24 June poll, only 15% said they thought the nuclear and missile issues could be resolved, compared with 70% who did not think they could be resolved. In NHK’s latest poll, conducted 6-8 July, the public may be even more pessimistic nearly a month after the summit, with only 12% saying that they thought that the denuclearization of North Korea would advance following the summit, and 55% saying that they thought it would not advance (25% said they could not say).

The public may be more divided when it comes to resolving the abductee issue between Japan and North Korea. For example, the overlapping Yomiuri and Asahi polls found conflicting results: Yomiuri found that only 19% think the abductee issue can be resolved, compared with 73% who do not, while Asahi found that 40% are optimistic about Abe’s ability to resolve the issue, compared with 51% who are not. Asahi’s poll may be an outlier, however, since other polls found considerable pessimism. In Mainichi, only 18% thought the issue could be resolved, while 66% did not. In Nikkei, 32% are optimistic that the Abe government can resolve it, but 60% are not. Finally, in last weekend’s NHK poll, only 14% think that efforts to resolve the abductee issue will move forward, but 43% do not and 33% cannot say.

Undergirding these findings was a shift in attitude towards the value of diplomacy versus pressure in attempting to defuse tensions on the Korean peninsula. The Yomiuri Shimbun has regularly asked respondents whether they think that pressure or dialogue should be emphasized in dealing with North Korea. In January, respondents favored pressure over dialogue by a 50% to 40% margin. In March, in a poll conducted immediately after the U.S.-North Korea summit was announced, the public was evenly divided, with 42% favoring dialogue and 43% favoring pressure, a division that would continue in several subsequent polls. However, in May, Yomiuri found that 48% favored dialogue and 41% favored pressure; in June, this balance would widen further, with 48% still in favor of dialogue but only 39% in favor of pressure (13% did not respond).

The public believes that it is necessary for Abe to participate in the broader regional effort to forge new ties with Pyongyang.

The upshot is that despite doubts about Japan’s ability to resolve its main issues with North Korea, the public believes that it is necessary for Abe to participate in the broader regional effort to forge new ties with Pyongyang, perhaps as much to avoid Japan’s exclusion from a settlement as to deliver the best possible settlement for Japan. While Abe may be constrained by his own history as an advocate for the families of Japan’s abductees and his conservative base’s interest in resolving the issue – and North Korea does not seem particularly eager to conduct diplomacy with Abe – the Japanese public’s realism may work in Abe’s favor as he pivots away from “maximum pressure” and seeks his own summit with Kim. 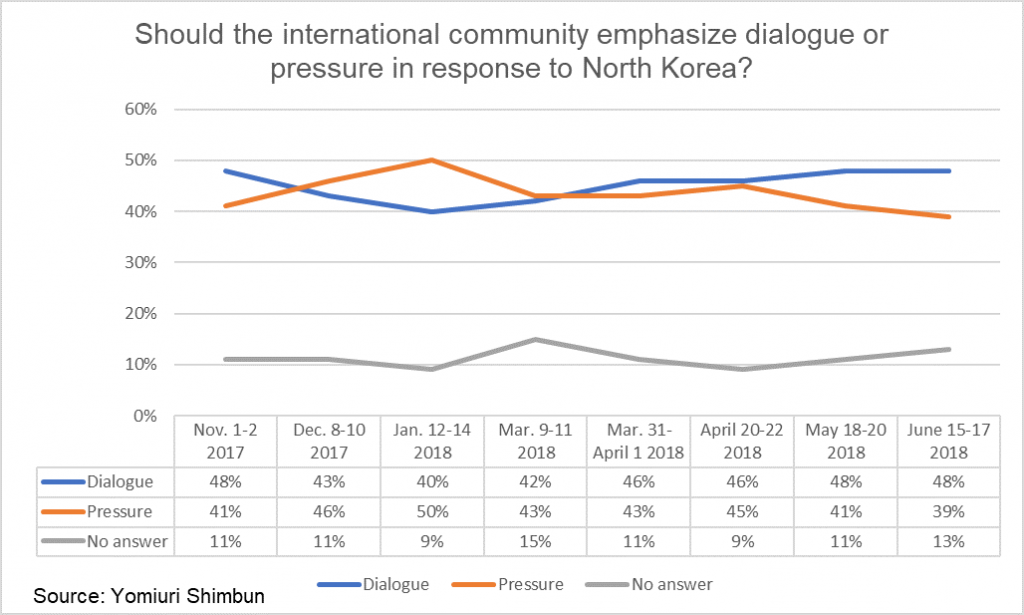