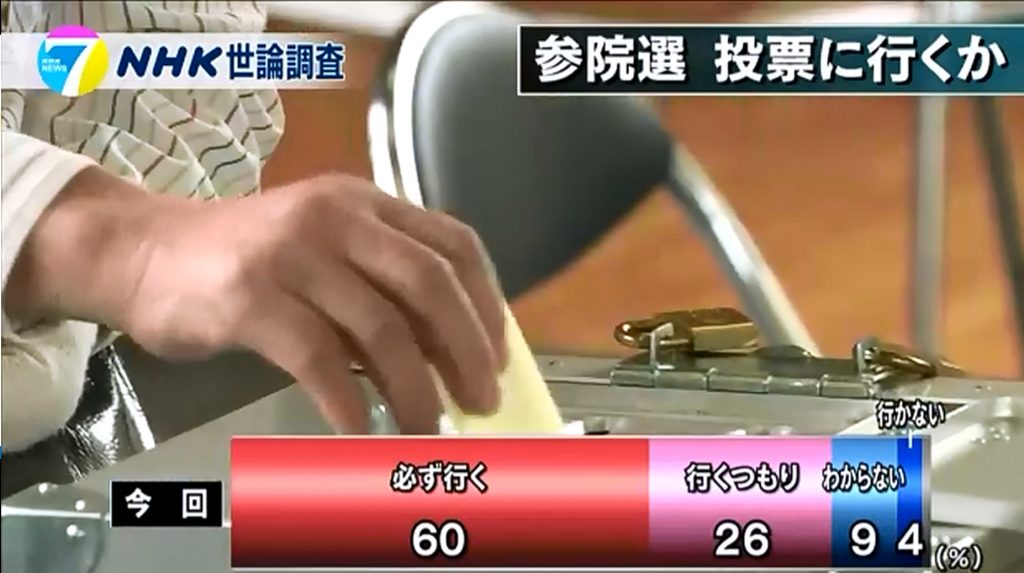 The government’s headline approval ratings remain robust, if slightly weaker than in early June. After rising above 50% in most polls following the G7 summit, the administration’s headline approval rating is back below 50% in every poll: 47% in NHK, 45% in Asahi, 46.1% in Jiji, and 49% in Yomiuri. These numbers are still extremely high by historical standards, and are especially impressive when coupled with a 30–40% support rate for the LDP.

However, this support may be softer than it appears, and there is a distinct possibility that poor economic news and relentless criticism of Abenomics by the opposition parties during the campaign could result in a ruling coalition seat total closer to the government’s sixty-one-seat “victory line” (what the government has said it has to win in order to declare victory) than Abe might prefer. After all, polls have continued to show that a plurality of the public disapproves of Abenomics, the government’s signature economic policy program.

[perfectpullquote align=”left” cite=”” link=”” color=”” class=”” size=””]The opposition parties have thus far been unable to use dissatisfaction with Abenomics to raise their support, but the campaign will amplify their message and deliver it to a broader audience that will go to the polls thinking about economic policy.[/perfectpullquote]

Disapproval of Abenomics is at 45% in the latest Yomiuri poll and 47% in NHK. Asahi, meanwhile, asked respondents to rate the government’s progress in boosting employment and wages thus far. 69% rated that progress as either little (50%) or none (19%), while only 28% said a lot (2%) or some (26%). Admittedly, the opposition parties have thus far been unable to use dissatisfaction with Abenomics to raise their support, but the campaign will amplify their message and deliver it to a broader audience that will go to the polls thinking about economic policy. Every poll has consistently shown that voters care more about social security and economic growth than other issues when it comes to deciding how to vote. In Yomiuri’s June 20 poll, 34% said “pensions and social security” would be the top priority for choosing a party to vote for, while 26% said “growth and jobs” would be. In NHK’s June 20 poll, the comparable numbers were 28% and 26% respectively.

The question, then, is whether the Democratic Party (DP) and other opposition parties will be able to bring voters to the polls to cast protest votes against Abe and his economic policies. The DP in particular must appeal to unaffiliated voters, rather than the organized voting blocs that the LDP, Komeito, and Japanese Communist Party (JCP) rely on in HOC elections. In 2013, turnout fell by more than five percentage points and more than five million votes, and the Democratic Party of Japan (the previous name of the DP) vote total in the proportional representation (PR) seat bloc fell by more than eleven million votes. A portion of those voters went to the LDP and the now-defunct Your Party and Japan Restoration Party, but a significant portion did not vote. Bringing at least some of those voters back to support the DP is the critical task for Japan’s leading opposition party.

Thus far, it appears unlikely that it will succeed. In Yomiuri’s poll, 49% say they want the ruling coalition to retain its HOC majority, compared with 36% who do not. This figure is important, because it suggests a limited desire on the part of voters to undermine the Abe government’s stability. How is the DP supposed to draw support if nearly a majority of voters prefer the stability of the status quo? Of course, the DP has also struggled to gain ground on the LDP in polling that asks who voters intend to support in PR voting. The LDP continues to poll around 35%, while the DP receives 10–15%. The DP has also struggled to convince voters of the wisdom of its electoral alliance with the JCP, Social Democratic Party (SDP), and People’s Life Party (PLP). While the alliance has ensured that the opposition vote will not be divided in the thirty-two single-member constituencies—the key battleground in the campaign—voters are evenly divided about the value of the DP’s relationships, especially with the JCP. For example, NHK found that 45% either greatly (11%) or somewhat (34%) approve of an alliance between the two parties, while 45% either somewhat (30%) or completely (15%) disapprove of the partnership. Yomiuri found that 40% approve, while 36% disapprove. Given these figures, it is not surprising that in the run-up to the campaign Abe has stressed the “irresponsibility” of the opposition alliance, chiding the opposition parties for failing to offer any details about how they would govern, were they able to “overthrow” the Abe administration.

[perfectpullquote align=”right” cite=”” link=”” color=”” class=”” size=””]While the LDP-Komeito coalition has a distinct advantage heading into the campaign, the opposition could still pick up ground on the government before July 10. Meanwhile, it is unlikely that the Abe administration will boost its support ahead of the vote.   [/perfectpullquote]

However, there are some signs that the electorate is still undecided, leaving the opposition room to drive up turnout and exceed expectations. A Mainichi Shimbun poll conducted June 18–19 found that 46% of respondents wanted the opposition’s seat share to increase, compared with 34% who wanted the ruling coalition’s seat share to increase. Independents were even more favorably disposed to the opposition: 57% said they wanted the opposition to win more seats, compared with only 20% who wanted the government parties to make gains. Independents make up at least a third of the electorate, and they are largely undecided over which party to support. Mainichi found that the LDP and DP are tied among independents with 12% support, meaning that most still have not decided. Significantly, in a June 13 Kyodo News poll, respondents favored government party candidates to opposition party candidates by only a 26% to 20% margin in electoral district polling, a six-percentage-point drop in support for government candidates from early June.

The risk, of course, is that many independents will stay home, and the Mainichi poll suggests that turnout could be lower than in 2013, which was the third lowest in postwar history. This poll found that 85% are definitely (60%) or probably (25%) going to vote, lower than the 92% in 2013 who said they were definitely (67%) or probably (25%) going to vote. Yomiuri found that 55% say they definitely will vote, and another 7% say they probably will vote. However, NHK found that 60% said they will definitely vote, two points higher than at this point in 2013.

The upshot is that while the LDP-Komeito coalition has a distinct advantage heading into the campaign, the opposition could still pick up ground on the government before July 10. Meanwhile, it is unlikely that the Abe administration will boost its support ahead of the vote. Instead, the polls suggest that if the government wins a landslide victory, it will be because independent voters decided to stay home—thus magnifying the impact of the government’s organized voting blocs—rather than because the government draws in new supporters.