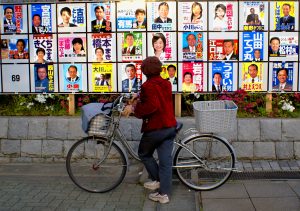 Three new opinion polls show Prime Minister Shinzo Abe’s approval declining significantly in the wake of his Liberal Democratic Party’s (LDP) defeat in Tokyo’s metropolitan assembly elections on July 2. In tracking polls conducted by NHK, the Yomiuri Shimbun, and the Asahi Shimbun, the government’s net approval ratings fell into negative territory for the first time since September 2015. Approval fell to the mid-30s, the lowest since Abe returned to the premiership in December 2012. His average approval rating is now 34%; his average disapproval rating nearly 49%.

The prime minister has bounced back from polling slides before, and he continues to benefit from a weak opposition, so suggestions by some that Abe is headed for a repeat of his resignation in 2007 are premature. But the new batch of polls includes several significant warning signs that suggest that Abe could have a harder time than he anticipated in winning a third term as LDP president when his term expires in September 2018 – and, in the meantime, his ability to control his party as he tries to amend the constitution might weaken.

Most significantly, the new polls suggest that trust in Abe himself has eroded. Asahi asked respondents to what extent they are able to have confidence in the prime minister: 61% said little (40%) or none (21%), while 36% said a lot (4%) or some (32%). In Yomiuri, meanwhile, among the 52% of respondents who said they did not support the government, 49% said that they did not support the government because “they cannot trust the prime minister.” The second-most popular choice – disapproval of cabinet ministers – was selected by only 16%. In NHK’s poll, 44% of the 48% of non-supporting respondents also cited lack of trust in the prime minister. Yomiuri, meanwhile, also found that 68% of respondents agreed that as the Abe administration’s tenure has lengthened, it has become “arrogant.” Only 25% of respondents disagreed.

The erosion of trust likely reflects the impact of nearly six months of allegations that the prime minister used his power to help his friends and associates. Early in 2017, the prime minister and First Lady Akie Abe faced accusations that they helped facilitate a steeply-discounted public land sale to Moritomo Gakuen, a right-wing private school with a close relationship with both the prime minister and the first lady. More recently, Abe has had to contend with allegations that senior political officials pressured the education ministry to fast track the licensing of Japan’s first new veterinary school in a half century, which would be operated by Kake Gakuen and headed by an old friend of the prime minister’s. The July polls suggest that these scandals have dented Abe’s image as a stable, reliable leader.

[perfectpullquote align=”full” cite=”” link=”” color=”” class=”” size=””]The latest tracking polls suggest that the LDP’s defeat at the hands of Tokyo Governor Yuriko Koike’s Tokyoites First party was driven as much by a desire to punish the LDP as by enthusiasm for Koike.[/perfectpullquote]

They have also damaged the LDP’s standing. The latest tracking polls suggest that the LDP’s defeat at the hands of Tokyo Governor Yuriko Koike’s Tokyoites First party was driven as much by a desire to punish the LDP as by enthusiasm for Koike. In the Asahi poll, 66% of respondents said it was good that the LDP’s seat total fell by more than half in the Tokyo elections, while 65% of respondents in Yomiuri said the same. Meanwhile, 60% of respondents in Yomiuri believed that criticism of the government and the LDP was a bigger factor in the outcome than support for Koike (which says less about how Tokyo voters actually voted than about how the public nationwide has interpreted the outcome). Yomiuri also recorded a drop in support for the LDP from 41% to 31% from June to July.

This situation does not signify a crisis for Abe and the LDP, not least because the Democratic Party (DP) has been singularly incapable of tapping into public desires for an alternative. Asahi found that while 82% felt that a party to oppose the LDP is “necessary,” only 5% said they support the DP and only 12% said they would vote for the DP if an election were held now. (Another 4% supported the Japanese Communist Party [JCP], and 10% said they would back the JCP in an election.) Yomiuri found that 70% are not optimistic about DP leader Renho, compared with only 23% who are.

But Abe still faces a difficult situation since his falling approval ratings and weaker support for the LDP will likely embolden rivals in his party who have already begun to criticize the prime minister more openly, have sought to distance themselves from his policies (including Abenomics), and have begun laying the groundwork for potential bids for the LDP’s 2018 leadership election. These rivals include not only Shigeru Ishiba, who has emerged as Abe’s most vocal critic in the LDP since leaving the government in 2016 (though has struggled to build broad support within the party), but also incumbent Foreign Minister Fumio Kishida, who has questioned Abe’s decision to pursue constitutional revision, including of Article 9. He has also criticized Abenomics for not addressing Japan’s increasing inequality. If Kishida leaves the government in the reshuffle expected on August 3 – and reports suggest that he wants to leave, perhaps to take a senior party post – he would have more freedom to prepare for a leadership bid that would complicate Abe’s pursuit of a third term as LDP leader.

[perfectpullquote align=”left” cite=”” link=”” color=”” class=”” size=””]The key question, therefore, is whether Abe can restore public faith in his leadership as he heads into the final year of his term.[/perfectpullquote]

The key question, therefore, is whether Abe can restore public faith in his leadership as he heads into the final year of his term. While he has some tools available – the forthcoming reshuffle, which could include bringing Shinjiro Koizumi, the popular son of former Prime Minister Junichiro Koizumi into the cabinet for the first time, or fiscal stimulus in response to heavy flooding in western Japan – Abe is also constrained. His commitment to revising the constitution by 2020 (and to a timeline that, if successful, would be completed ahead of the LDP ) has limited his ability to call a snap election, an important tool for prime ministers to discipline their parties. After all, if Abe were to call a snap election but lose his government’s supermajority in the House of Representatives, constitutional revision would be all but impossible. At the same time, constitutional revision has also given his intra-party rivals a convenient issue upon which to challenge the prime minister, as both Ishiba and Kishida have already done.

But the biggest constraint on Abe’s leadership is the still-lingering Kake Gakuen scandal. In Yomiuri’s poll, 72% of respondents said that Abe should explain in the Diet the circumstances surrounding the veterinary school’s licensing. In the Asahi poll, 55% supported the opposition parties’ call for a new Diet session as soon as possible to address the scandal. Asahi showed 74% disapproved of the government’s current explanations. Unless and until Abe provides a clear account, and perhaps even apologizes for irregularities in the licensing process, eroding public trust will continue to weigh on his approval ratings, encouraging challengers to intensify their preparations for the post-Abe era.