The meaning of Abe’s polling slump 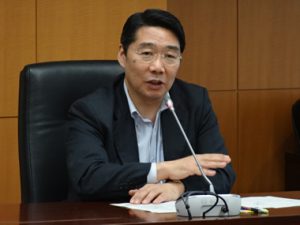 The shift against the government is driven by two major events. The first is a growing scandal regarding the involvement of senior Abe administration officials in the licensing of a veterinary school to be operated by educational institution Kake Gakuen, whose head is an old friend of the prime minister’s. Kake Gakuen received permission to open Japan’s first new veterinary school in a half century in one of the government’s special economic zones, the laboratories for deregulation created early in Abe’s tenure. The second is the ruling coalition’s decision to suspend ordinary legislative procedures to pass a controversial anti-conspiracy bill before the Diet session ended on June 18 (without having to extend the session, which would have left the government having to answer more questions about the Kake Gakuen scandal).

Because the endgame for the anti-conspiracy bill coincided with new revelations from the education ministry verifying that the key documents that allegedly demonstrate the involvement of senior Abe government officials existed, it is difficult to disentangle the relative impact of these two events on the public opinion polls conducted June 17-18 by Kyodo, Yomiuri, Asahi, Nikkei, and Mainichi all conducted.

It is likely, however, that the deepening scandal (another document surfaced on June 20 revealing that Deputy Chief Cabinet Secretary Koichi Hagiuda had invoked the prime minister to pressure education ministry officials to clear the new school for opening by April 2018) has played an especially significant role in the erosion of the government’s support in June. As Abe acknowledged in his June 19 press conference marking the end of the session, the scandal had “invited mistrust for the government from all people.”

The scandal has been particularly damaging for the government since the education ministry confirmed that documents exist which show the prime minister’s staff had repeatedly contacted officials regarding Kake Gakuen, documents that the government said did not exist when Democratic Party lawmakers and former Education Ministry Administrative Vice Minister Kihei Maekawa alleged that they did. While an initial and cursory education ministry investigation failed to uncover the files, a more substantial investigation conducted last week found fourteen of nineteen documents that record the involvement of senior officials in the licensing process.

Large majorities in every poll were unconvinced by the government’s explanations for how Kake Gakuen’s charter was approved.

The public response to these revelations has been uniformly and strongly negative. Large majorities in every poll were unconvinced by the government’s explanations for how Kake Gakuen’s charter was approved: 66% in Asahi, 70% in Yomiuri, 74% in Kyodo, 75% in Nikkei, 74% in Mainichi, and 66% in an NHK poll conducted before the education ministry’s announcement on June 15. No more than 18% of respondents in a poll said they accepted the government’s explanation. When asked by Asahi how the Kake Gakuen issue affected the Abe cabinet’s image, 54% said that it made the government’s image worse compared with 41% who said no change and only 1% who said it improved its image.

Accordingly, majorities think that despite the end of the parliamentary session, the Diet should continue to investigate the scandal even while in recess: 59% in Mainichi and 58% in Asahi support convening the upper and lower house budget committees during the summer recess to review the evidence. In Asahi, 58% also think that Maekawa and other key witnesses should be called to testify. NHK’s earlier poll found that 52% believed it is necessary for Maekawa and others to testify, compared with only 15% who believed it unnecessary. The Abe Administration has rejected calls for Maekawa to testify and has thus far refused calls to convene hearings during the recess. If, however, evidence of senior-level involvement in the licensing process continues to emerge, the government’s position could become untenable.

The anti-conspiracy bill exacerbated these concerns. It is important to note that the public backlash to the bill has been less about the substance, which some polls found enjoyed plurality support, than about how the Abe government passed the bill. Polls uniformly found that respondents objected to the government’s decision to move the bill to a vote in the House of Councillors without a proper vote in committee first. Even in Yomiuri’s poll, in which the bill commanded the support of 50% of respondents, 80% said that the government’s explanations of the bill’s contents were insufficient. (By comparison, only 69% in Asahi’s poll said the government’s explanations were insufficient.) The same poll found that 61% of respondents disapproved of how the government moved the legislation through the upper house, compared with only 26% who said it was appropriate. Other polls recorded similar results, even among respondents who otherwise supported the bill’s passage.

Dissatisfaction with the government’s management of the legislative process alone does not explain why the weekend’s polling was so bleak.

However, the nine-point swing against the government in NHK’s June 9-12 poll – conducted before both the upper house vote and the education ministry’s announcement – suggests that dissatisfaction with the government’s management of the legislative process alone does not explain why the weekend’s polling was so bleak. After a Diet session preoccupied with allegations that Abe has used his power to benefit friends and associates, and a series of ill-considered statements by cabinet ministers, the public’s trust in the Abe government seems to have eroded. The question now is whether Abe can restore at least some of the public’s confidence in his government, especially as the ruling coalition shifts its attention to constitutional revision in the second half of 2017. Constitutional revision had already prompted dissent not just from the Liberal Democratic Party’s (LDP) centrist coalition partner Komeito but also from within the LDP itself. Potential rivals to Prime Minister Abe, including former Abe cabinet member Shigeru Ishiba, have objected to the substance and timing of revision. Ishiba has also joined forces with other Abe critics to oppose Abenomics. The upshot is that if Abe cannot reverse or at least stabilize his public support, he is likely to face increasingly vocal opposition from within the LDP as the party’s 2018 leadership election approaches.