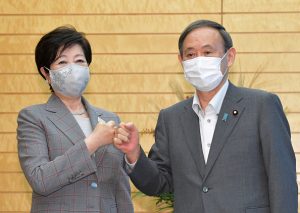 Campaigning for the Tokyo Metropolitan Assembly election began on June 25. A total of 271 candidates will vie for 127 seats in 42 electoral districts for 9 days until July 4, when voters will cast their ballots.

At the time of writing, many observers project a big win for the LDP and a big loss for Tokyoites First. One caveat is that many voters have not made up their mind yet.  According to the JNN poll, 52% of people have not decided whom to vote for in the Assembly election as of June 28.[i]

Incidentally, 76 women are running for seats in the Assembly election. This well surpasses the previous high of 65 women in 2017.

It is customary for pundits to describe the Tokyo Metropolitan Assembly as a prelude to or a litmus test for the Lower House election, which will be held before October 21, when the current term for the Lower House expires. While there is some truth to this perspective, it may be wise not to read into it too much as the Assembly election has a specific element, which is missing from a general election: namely, the Tokyoites First and Governor Yuriko Koike. Furthermore, both the course of Japan’s COVID-19 infection rate and the Olympics after the Assembly election will have much greater effects on the general election.

There are three main focuses in the Assembly election: 1) whether the Tokyoites First will retain a leadership position in the Assembly by limiting projected losses; 2) whether the LDP will make a major comeback by winning close to or over 50 seats; and 3) whether Komeito will remain a staunch coalition partner of the LDP by showing strong power obtaining votes.

The Tokyoites First won a major victory by securing 55 seats in the last Assembly election in July 2017. It was solely due to the star power of Yuriko Koike, who was elected governor of Tokyo in July 2016. However, the party’s candidates are facing an uphill battle since Koike is not actively campaigning. This situation reflects the reality that Tokyoites First is Koike’s party.

First, Koike, who became special advisor to Tokyoites First, has had an ambiguous and somewhat strained relationship with the party. A former member of the LDP, Koike tried to mend her relationship with the local LDP leadership in the Tokyo Assembly, despite the fact that she criticized the LDP in the last Assembly election. Some party members, including co-founders of the party, whom Koike proudly called “first penguins,” [iv] such as Reiko Ueda and Shun Otokita, left the Tokyoites Frist in protest, because they interpreted Koike’s cozying up to the LDP as a betrayal to Tokyoites First. Since Tokyoites First won 55 seats in the last Assembly election, it has lost 9 Assembly members, mostly due to resignation of membership.

Second, Koike, has made it clear she will not aggressively take part in the election campaign of Tokyoites First’s candidates. In order to fulfill her ambition to return to national level politics, even before her term as governor of Tokyo is up, she must effectively deal with COVID-19 infections and successfully host the Olympics and Paralympics to maintain her status as a main political player. Koike has been unexpectedly sidelined by being hospitalized for excess fatigue since June 22.[v] It is widely projected that many Tokyoites First’s candidates, who were elected because of Koike’s popularity, will experience hardship without her support.

The LDP aims to regain a leadership position in the Assembly, which the party lost in a disastrous defeat in the 2017 election. Before the last election, the LDP had 57 seats. However, Tokyoites First’s victory cost the LDP 34 seats, leaving them in control of a mere 23 seats. Koike’s popularity overwhelmed the LDP’s ability to maintain control. 23 seats proved to be much lower than the previous nadir of 38 seats for the LDP in the Assembly. The entire leadership of the Tokyo LDP, including Hakubun Shimomura, then president of the local LDP, resigned from their positions in the local LDP.

The LDP is optimistic about how the Assembly election is shaping up for them at the beginning of the 9-day campaign period. According to the Nikkei poll taken on June 25 and 26, 31.8% of people say they will vote for the LDP, significantly leading other major parties; 14.1% for Komeito; 13.1% for the Japan Communist Party; 12.1% for the Tokyoites First; and 7.1% for the Constitution Democratic Party.[vi] The LDP has adapted an informal goal this time of securing 50 seats in the Assembly election as a measurement of victory.

The LDP leadership is taking the Assembly election seriously to ensure a big victory to pave a way for the Lower House general election, which will likely take place in September. Prime Minister Suga took a lead in boosting the morale of the party by attending a rally to mark the beginning of the campaign period. He urged high-level and popular national level lawmakers to do their best to help all 60 LDP Assembly candidates get elected.

While the major opposition parties vow to cancel or limit the Olympics and Paralympics, the LDP avoids talking about these events by name in order to prevent them from becoming a focal point for criticism. Consequently, Prime Minster Suga has focused on the pandemic instead. For example, he said recently, “[I]t is the ruling party’s responsibility to protect the lives and livelihood of the people under the coronavirus pandemic.”

The Komeito, the coalition partner of the LDP, seems to be in a tough battle. While they have had all candidates elected in the last seven Tokyo Assembly elections, informed observers agree that it may be difficult to do so this time. Komeito’s formidable vote getting power seems to be showing signs of decline due to the reportedly dwindling and aging membership of Soka Gakkai, the Buddhist religious organization affiliated with Komeito. The Komeito got 8.98 million proportional votes in the Lower House election in 2005. However, in the 2017 Assembly election the party got only 6.97 million proportional votes and lost a total of 5 proportional seats.

Moreover, while the Komeito had all 23 candidates elected in the Tokyo Assembly election in 2017, Komeito candidates greatly benefited from the aggressive support received by Koike based on an agreement to cooperate in the election. However, the relationship between the Komeito and Koike has soured mainly due to Koike’s personal ambition and the disarray of Tokyoites First. As a result, the Komeito is not expecting any support from Koike for the upcoming Assembly election.

The Constitutional Democratic Party (CDP) and the Japanese Communist Party (JCP), which are critical of Koike, are expected to gain seats as they coordinate to avoid their candidates directly competing in the same districts.

Although the LDP leadership expects to gain a significant number of seats in the Tokyo Assembly election on July 4, they are on high alert for a possible snap election in September. Even if the LDP wins big and regains a majority with the Komeito in the Assembly, projections for a general election are essentially impossible at this time. Ultimately, everything depends on whether the government can prevent new cases of COVID-19 infections from exploding as well as their ability to host a safe and enjoyable Olympic games for Japanese people, who have been enduring a lot, to say the least.

[iv] The term “First Penguins” was often used by Koike to describe her co-founders of the Tokyoites Party. In this analogy, the co-founders were taking a great risk by opening a new era by taking up new challenges, just like penguins leading their pack by jumping into the ocean.