This summer’s House of Councillors (HOC) elections will be the first in which Japan’s eighteen and nineteen year olds can vote. Ahead of this historic vote, the Asahi Shimbun conducted a mail survey of soon-to-be-eligible young voters, seeking to understand how they view Japanese politics and society. It received valid replies from 2,109 respondents.

The survey found that young voters are less favorably disposed to the Abe government than the electorate as a whole: only 38% approved of the cabinet, compared with 43% who disapproved. Perhaps even more significant, they exhibited little or no attachment to any particular political party; 69% described themselves as independents, considerably more than the 45% who said they supported no party in Asahi’s March tracking poll of all voters. 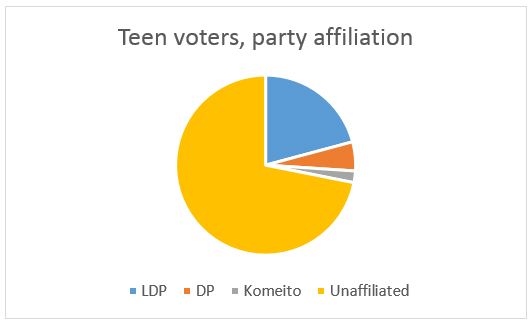 In the near term, teenage voters could introduce an element of uncertainty into elections, particularly since the Asahi poll suggests that they could be an especially liberal voting bloc. While their priorities tend to align with the electorate as a whole—72% said growth and employment should be the top policy priority, while 61% said social security, both issues that are regularly named as top priorities in other opinion polls—59% stressed that inequality had “gone too far,” 57% said constitutional revision was unnecessary, and 74% said it would be better not to change Article 9 of the constitution.

However, it is important not to overstate the likely impact of new voters. Estimates suggest that lowering the voting age from twenty to eighteen will add roughly 2.4 million new voters to the electorate, a 2% increase in the size of the voting-age population. But if teenage voters vote at the same rate as twenty-something voters, their impact will be negligible. In five of the last seven general elections, turnout for twenty-somethings has been less than 40%, and in every election since 1969 twenty-somethings have turned out at substantially lower rates than other age brackets. Turnout has been consistently worse in HOC elections: the last time more than 36% of twenty-something voters turned out was 1989. There was one particularly encouraging data point, however: 59% of respondents thought that their futures looked bright, compared with 30% who did not. 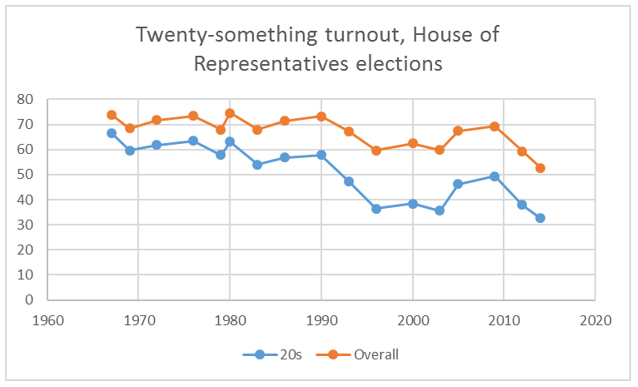 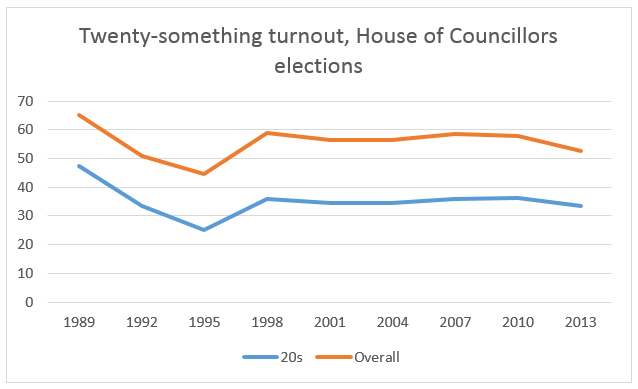