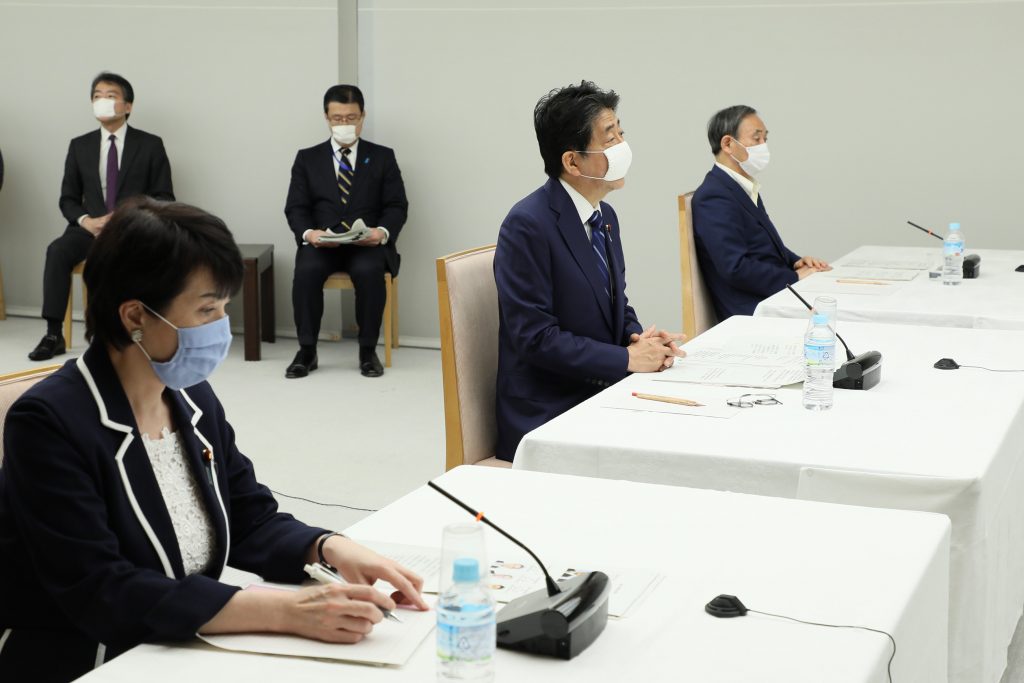 The administration of Prime Minister Abe has been heavily criticized for its measures against COVID-19 by both Japanese and Western media, overseas Japanese citizens living in U.S. and European hotspots, and internationally recognized pandemic experts.

The New York Times reported on the situation on-board the Diamond Princess cruise ship in February, stating that Japan’s “delay and other missteps helped produce the largest outbreak of the virus beyond China.”[1] Overseas Japanese citizens, who have experienced the pandemic disasters in New York and

London, have been critical of Japan’s seemingly slow and lackadaisical response, arguing that Tokyo will suffer the same fate as New York and London with just a two to four week delay since late January.[2]

Dr. Kenji Shibuya, director of the Institute for Population Health at King’s College London, said last month that “Japan has been screwing up,” and the number of confirmed cases in Japan are “just the tip of the iceberg.”[3] Dr. Shibuya, a former health policy chief at the World Health Organization, expressed his skepticism toward Japan’s “cluster-based” approach and went on to say that “a surge of patients could cause Tokyo’s health care system to collapse.”[4]

As a matter of fact, fear of an explosion of cases was shared by the Abe administration.  Abe declared a nationwide state of emergency on April 16th.[5] The entire nation of Japan braced for the worst outcome following “Golden Week”, which is the nation’s longest holiday period stretching from the end of April to early May. Traditionally, people move en masse throughout the nation during this holiday period.

Reflecting the lack of strong legal authority to order Japanese citizens to stay at home, the Abe administration could only strongly request that citizens practice prudence during Golden Week by refraining from leisure travel around the country and reducing human contact by 80%. However, the mood was gloomy entering Golden Week.

As of May 17th, the world had over 4.6 million cases of COVID-19, with the U.S. accounting for close to 1.5 million cases. Over 300,000 people have died from the infection worldwide and in the U.S. that number has risen close to 90,000.[6] Robert Redfield, Director of the Centers for Disease Control and Prevention, recently predicted, based on 12 different models tracked by his agency, that the number of deaths in the U.S. will top 100,000 by the end of May.

In Japan as of May 17th, more than 10 days after the end of the Golden Week, there are 16,310 confirmed cases and 748 deaths.[7] New cases in Tokyo, the hotspot in Japan, have been on the decline. The number of daily new cases in Tokyo has been less than 50 for 12 consecutive days starting from May 6th, after Golden Week ended.

The numbers of new cases in Tokyo during the seven-day period from May 11th to May 17th were 15, 28, 10, 30, 9, 14, and 5, respectively. The metropolitan government was able to successfully trace the infection chain of all five new cases on May 17th. It was the first occasion that the authority was able to trace all new cases from a single day since April 7th, when Abe first declared the state of emergency for seven of Japan’s prefectures.

With the decline in new cases to a very low level, Abe lifted the state of emergency for 39 prefectures on May 15th, but called for continued cooperation to reduce human contact by 80% and avoid san mitsu or the “Three Cs” – closed spaces, crowded places, and close-contact settings – in order to continue to suppress the transmission of COVID-19.

Obviously, it is too early for the Abe administration to self-congratulate and celebrate a victory for Japan. Most experts think that we are at an early stage of what will be a very long fight against COVID-19. Additionally, there is skepticism about Japanese data as Japan has thus far administered an astonishingly low number of tests. Furthermore, there remains a serious danger of infection rates flaring up in the coming months and a possible second wave in fall and winter combining with the annual flu season. Moreover, there is no vaccine or therapeutic medicine for COVID-19. Needless to say, Japan is experiencing disarray at the economic, social, and family levels.

However, judging from the official number of infected cases and deaths, it seems reasonable to say that Japan is clearly suffering less and dealing with COVID-19 better than the U.S., Europe, and other regions.

A clear scientific and convincing explanation for Japan’s relative success in containing COVID-19 is absent, but the following factors may help explain Japan’s relatively low infection and death counts.

First, Japan has introduced a “cluster-based approach” from an early stage, which is different from the U.S. and Europe. The approach is based on the hypothesis that certain infected individuals have higher transmissibility of COVID-19 than others. This hypothesis is based on epidemiological analysis of earlier outbreaks conducted mainly by Japan’s Cluster Response Team as well as the Expert Meeting on the Novel Coronavirus Disease Control conducted by the Ministry of Health, Labour, and Welfare which involved both public and private sector experts.[8] The cluster-based approach tries to prevent COVID-19 from spreading widely by isolating individuals with higher transmissibility and busting clusters at an early stage. The cluster-based approach seems to have worked so far, but the long-term efficacy of the approach is yet undetermined.

Second, there are the realities of Japanese cultural and social norms. Japan generally has a high level of attention to hygiene in society, including the wearing of facial masks during flu season and taking shoes off before entering the household. Japanese greetings normally avoid bodily contact in contrast with the practice of shaking hands or hugging common in other societies. Japanese citizens also have a tendency to follow rules and orders, especially when directed by government officials and experts with logical and scientific explanations. This includes public acceptance of existing vaccines, the benefits of which have been widely recognized.[9] Common sense tells us these factors must be helping Japan, but there have been no scientific studies to prove it.

As a result, skeptical views on Japan’s situation persists in the media, overseas Japanese citizens, and internationally recognized experts. For example, Dr. Shibuya expressed his worry that “(Japan is) missing a lot of asymptomatic and mildly symptomatic cases” due to the very small number of tests being administered as part of Japan’s focus on the cluster-based approach.[10] He estimates that the actual number of cases in Japan is 20 to 50 times the official figure. This would put the true number somewhere between 280 to 700 thousand cases in Japan.[11] He warns that “Japan should think that the peak of epidemic damages has not come yet.”[12]

The battle against COVID-19 is likely to continue for a long time as the world still lacks collective immunity, vaccines, and therapeutic medicine. Japan may have just finished first inning of a baseball game against the virus. However, Japan seems to be doing much better than the U.S., Europe, and other regions based on official data and anecdotal evidence from the first inning of the battle against COVID-19.

Abe credited Japanese citizens for preventing COVID-19 from spreading as it has in other countries through “their utmost efforts supported by strong will of every single Japanese person” and urged them to continue their efforts. Getting ahead after first inning is not a terribly bad way to begin the baseball game, but there are many innings yet left to play.

[5] The state of emergency was originally issued in seven prefectures on April 7th and was expanded to the entire nation on April 16th.

[9] There are some discussions on efficacy of BCG vaccine against COVID-19. The Japan Society for Vaccinology issued a statement (2020.4.3 Ver.2) on April 3rd, 2020 saying they neither affirm nor deny its efficacy due to lack of evidence.