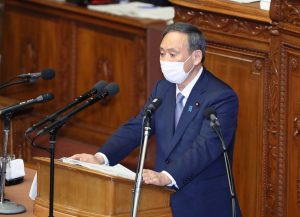 Prime Minister Suga’s first Diet policy speech on October 26, 2020. (Official Website of the Prime Minister of Japan and His Cabinet)

The latest Nikkei poll, conducted between October 24 and 25, shows that Japanese public support of the Suga cabinet is very high – 63% of respondents approved of the new cabinet, while only 26% of respondents did not approve.[1]

Compared with Nikkei’s first poll after Mr. Suga took office, which was conducted between September 16 and 17, the cabinet approval rate has decreased from its high of 74%, while the disapproval rate has gone up from 17%. While the 11% point decline in the approval rate in a little more than a month seems big, there were in reality other factors boosting the approval rate in September. The 74% approval rate was exceptionally high and reflected the Japanese public’s sympathy for former Prime Minister Abe, who resigned suddenly due to illness. Furthermore, according to Nikkei, after 2000, only the Koizumi cabinet (April 2001 – September 2005) and the second Abe cabinet (December 2012 – September 2020) recorded higher approval ratings in the second survey as compared with the first survey following the establishment of a new cabinet.

As a matter of fact, there is an indication in the Nikkei poll that the Japanese public strongly supported the Suga cabinet in its early weeks. 52% of respondents approved actions taken by the Suga cabinet and the Liberal Democratic Party (LDP), while 30% of respondents disapproved of such actions. The average rate of approval ascribed to works performed by a new cabinet has been 45% since 2006. Therefore, the Suga cabinet received a much higher approval rating regarding its actions than the average during its initial period.

One of Prime Minister Suga’s priority policy issues is the reduction of cell phone user fees. This issue is a highly visible symbol of unnecessary regulation in the Japanese government, protected by vested interests and bureaucratic precedents. 82% of respondents support the Suga administration’s efforts to lower the fee, while only 10% oppose the Suga administration’s efforts.

Incidentally, 54% of respondents opposed the Suga cabinet’s efforts to ease restrictions on foreign visitors to Japan, while 36% supported those efforts.

Lastly, the Japanese public has clearly indicated its position on major deregulation issues, which it wants the Suga administration to tackle, including relaxation of telework hours (14%), promotion of renewable energy (14%), easing of entry to agriculture by corporations (12%), expansion of online medical treatment (12%), increasing foreign works (9%), introduction of self-driving technology (7%), and abolition of the use of personal seals or hanko (6%).

[1] To view the Nikkei polling data referenced throughout the above article, please access: https://vdata.nikkei.com/newsgraphics/cabinet-approval-rating/