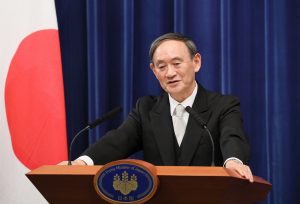 On September 16, Prime Minister Yoshihide Suga became Japan’s first new leader in nearly eight years. He served as former Prime Minister Abe’s Chief Cabinet Secretary throughout the Abe administration. During his tenure, Mr. Suga held two press briefings a day as the government`s primary spokesperson. He became quite a popular politician, becoming known as “Uncle Reiwa,” after announcing Emperor Naruhito’s imperial era name. It was a rare moment when now Prime Minister Suga found himself in the spotlight during the Abe administration.

However, Prime Minister Suga is also somewhat of a mystery to the Japanese public.  He is an unassuming and unsmiling elder statesman, who lacks the charm and charisma which characterizes former Prime Minister Abe and some other Liberal Democratic Party (LDP) leaders. He is not a hereditary politician with a famous father or grandfather in politics. Mr. Suga is instead the son of a strawberry farmer and a teacher from rural Akita prefecture in the north of Japan. In short, while respected and feared by fellow politicians and bureaucrats as Chief Cabinet Secretary, Mr. Suga’s real persona has been hidden from most of the Japanese public until he was recently elected to be the LDP party president. However, Prime Minister Suga, who is a domestically oriented politician at heart, is still largely unknown outside Japan.

Prime Minister Suga must tackle immediate political issues such as keeping the COVID-19 crisis under control and getting the Japanese economy back on track. Beyond handling these twin crises, he also needs to work with the International Olympic Committee to ensure that the Olympic Games are successfully held in Tokyo next summer. Furthermore, Mr. Suga would like to make fertility treatments eligible to be covered by Japan’s national health insurance in order to boost the national birth rate and stem the decline in Japan’s population.

However, Prime Minister Suga’s biggest mid to long-term policy goal as Prime Minister is domestic regulatory reform. Once elected LDP President, he said repeatedly that he would reform troublesome regulations based on the citizens’ common sense. Mr. Suga has declared that he will break up bureaucratic stove-piping, vested interests, and bad precedent, which he regards as the primary problem points of the current regulatory scheme. His political slogan: “self-help, mutual help, and public assistance,” means the government will provide an open environment and a social safety-net enabling the Japanese people to thrive via their own initiative and ingenuity.

Self-help without family backing and defiance against the unreasonableness of established systems has formed the backbone of Prime Minister Suga’s character. In his short but strongly worded acceptance speech when he was selected as LDP President, Mr. Suga proudly stated: “I jumped into politics, where I had no connection or relatives, literally starting from zero.”

Prime Minister Suga’s junior high school class had 120 students. About half of the class left Akita immediately after graduation for Tokyo to find work. A quarter of the students began working on family farms. The remaining 30 students were the only ones to advance to high school, one of them being Mr. Suga. However, upon graduation from high school, Mr. Suga departed Akita for Tokyo as a “runaway,” rebelling against his father’s wish that he take over the family farm.[1] In Tokyo, Mr. Suga started work in a cardboard box factory, but struggled to make a good life for himself in his new city. Eventually, he managed to pay his own way through university by pulling a cart for a greengrocer at the Tsukiji fish market.

Despite his monotone facial expressions and mild manner, Mr. Suga has been a tenacious fighter throughout his political career. When he decided to run for his first elected office, a Yokohama city assembly seat, the LDP leadership was against him as a newcomer from a faraway place. Nevertheless, Prime Minister Suga was determined to never bow to the pressure from the party, including from his mentor Mr. Hikosaburo Okonogi, member, House of Representatives.[2] The LDP applied a great deal of pressure on him to quit running as part of the LDP and refused to give him official party support. Regarding that period in his life, Prime Minister Suga has said: “I saw all the bad things about the LDP at the time.”[3]

Prime Minister Suga is determined to break up bureaucratic stove-piping, vested interests, and bad precedent in Japan’s politics. He appointed one of his proteges, Mr. Taro Kono, former Minister for Foreign Affairs and Defense, as Minister in charge of Administrative Reform in his new cabinet. Some describe Minister Kono’s new appointment as tantamount to a demotion owing to his habit of making rash decisions without proper coordination with the party, such as the Aegis Ashore cancellation.[4] However, Prime Minister Suga told Minister Kono to do his best in the position as it is a vital one if the cabinet is to successfully cut through unnecessary regulations.[5] In particular, Minister Kono is expected to play a major role in the biggest regulatory reform issue on the cabinet’s agenda, the establishment of a digital agency.[6]

Prime Minister Suga’s resume is decidedly thin on foreign policy. He has not said much about diplomatic and security issues, except in written official speeches, reflecting the fact that he has primarily been a domestically oriented politician. Mr. Suga actually admitted that “Prime Minister Abe’s top diplomacy is really fantastic. It is something I cannot do. I have my own foreign policy stance. I would like to stick to my own diplomatic style” in an LDP party leadership debate on September 12, 2020.[7]

Prime Minister Suga has additionally been clear about continuing the Abe administration’s realistic approach to China. Under the Abe administration, the bilateral relationship became increasingly more stable compared to the start of Mr. Abe’s return to the premiership in December 2012. Mr. Suga criticized the concept of “Asian NATO,” which Mr. Shigeru Ishiba, a major challenger for the LDP leadership, had advocated for. Prime Minister Suga said that the concept is strategically misguided because such an arrangement would inevitably lead to anti-China containment. He pointed out the importance of building solid relationships with Asian countries, while telling China what needs to be clearly conveyed.

Prime Minister Suga retained Foreign Minister Toshimitsu Motegi as yet another bulwark of continuity from the Abe administration. The veteran Vice-Minister for Foreign Affairs Takeo Akiba will also stay on in his position. Director-General of North American Affairs Bureau, Keiichi Ichikawa, who returned from the Japanese embassy in Washington, DC this past July, was previously a staff person for Mr. Suga. Mr. Suga has indicated his intention to rely on information provided by the Ministry of Foreign Affairs. This seems to be a bit of a departure from the previous administration where it was well known that foreign policy was created and lead from within the cabinet.

Prime Minister Suga delivered his first major speech at the 75th Session of the United Nations General (UN) Assembly on September 26, 2020. The speech highlighted several important international issues on the Prime Minister’s mind, but the speech may have revealed that Mr. Suga’s foreign policy is still being formulated beyond policies which continue the path of the Abe administration. Prime Minister Suga mentioned COVID-19, universal health coverage, UN and multilateral frameworks, support for peace and rule of law, the Free and Open Indo-Pacific, North Korea, and non-proliferation. Noticeably absent from the speech were mention of other major issues including free trade and climate change.

The most important domestic political challenge facing Prime Minister Suga is that he has just 12 months to serve out the remainder of the term for the party leadership, which former Prime Minister Abe would have held until next September. Prime Minister Suga would certainly like to be re-elected as LDP president next September for a regular three-year term to continue as prime minister. Mr. Suga, according to the Nihon Keizai Shimbun, posted a 74% support rate, the third-highest support level ever recorded for a prime minister entering office.[9] He may want to take advantage of this high level of support to win a general election before the end of this year to ensure a longer term as prime minister. Professor Emeritus of Political Science Gerald Curtis of Columbia University said, “if he gets three years, he can do lots of things he wants to do. But if he does not very quickly convince the public (that he can get things done), his chances of being reelected are very limited.”[10]