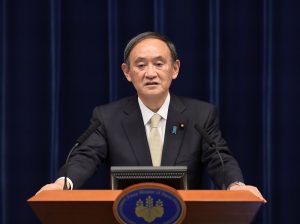 Prime Minister Suga had a summit meeting with President Biden on April 16, the first foreign leader to visit the president at the White House. This summit not only presented a symbolic confirmation of the U.S.-Japan alliance to the world, but it also included a strong substantive meeting that covered a wide range of issues, including a discussion on geopolitical issues centering on China. Two new initiatives, namely, the Competitiveness and Resilience (CoRe) Partnership and the U.S.-Japan Climate Partnership, which were announced following the summit, identify many ambitious agendas for the United States and Japan to collaborate on, such as technology and innovation, COVID-19 response and global health, climate change and green growth, Paris Agreement implementation, clean energy technology, and support for other countries in decarbonization.

The summit with President Biden is also a critical part of Prime Minister Suga’s domestic political maneuvering to be re-elected party president in September to continue to lead the nation. Prime Minister Suga’s gauging of the timing of a Lower House election, which needs to take place before the term ends on October 21 for the chambers’ current members, is crucially important to solidify his standing within the LDP to be re-elected as party president. Prime Minister Suga would prefer avoiding a presidential party election before the Lower House election to ensure there will be no open rebellion within the party. This is particularly important after failing to win all three national-level elections, a Lower House by-election in Hokkaido, an Upper House by-election in Nagano, and a re-held Upper House election in Hiroshima on April 25.

The successful summit with President Biden is proof that Prime Minister Suga, as the national leader, can manage the relationship with the United States, the most important ally in Japan’s national defense and stability in the Indo-Pacific region. The management of U.S-Japan relations is particularly important for Prime Minister Suga, as foreign policy and security have not been regarded as his forte, as was the case for his predecessor, former Prime Minister Shinzo Abe. After all, no Japanese prime minister survives without having a good strategic relationship with the United States, as was tragically demonstrated by two former DPJ prime ministers, Yukio Hatoyama and Naoto Kan.

Looking ahead, the best scenario for Prime Minister Suga is to, 1) manage to hold the Tokyo Olympics and Paralympics per schedule this summer, 2) expand vaccine rollout to suppress new cases from exploding, 3) hold a snap election to solidify his re-election standing for presidency within the party, and 4) hold an election for party president to continue as prime minister. However, each step has uncertainties within itself: 1) the effects of COVID-19 and its variants on an international sporting event is unclear, 2) whether or not vaccine rollout can be sped up to suppress the rise in new COVID-19 cases, 3) whether or not Prime Minister Suga can manage to have a reasonably respectable victory in the general election together with coalition partner Komeito, and 4) if a delicate balance can be maintained among the three legs that support Prime Minister Suga, i.e., Hosoda (Abe) faction/Aso faction/Takeshita faction team, Nikai faction team, and Komeito.

Thirdly, Secretary-General Nikai, who has seen an erosion in his political influence within the LDP, might leave Prime Minister Suga and decide to support someone else to retain influence. Political observers in Japan think that it was no accident that Secretary-General Nikai said, “canceling the Tokyo Olympics could be an option if the coronavirus spreads further” and “I don’t know what the Olympics would be for, if the games help the virus to spread.” Prime Minister Suga took notice of Secretary-General Nikai’s sniping by saying, “the government’s stance on preparing to hold the games safely has not been changed.” Wild speculation is that Tokyo Governor Yuriko Koike declares cancellation of the Olympics and Paralympics. While it would be a terribly populist and even risky move for the Tokyo Governor to do so, she might gamble as her political base, the Tokyoites First Party, desperately needs a boost for the Tokyo Assembly elections scheduled to take place on July 4. Therefore, Secretary-General Nikai, who has worked with Governor Koike, might team up with Governor Koike to check Prime Minister Suga, who does not get along with Governor Koike at all.

Fourthly, there is currently no strong competitor to Prime Minister Suga for the party presidency. As mentioned earlier, former Prime Minister Abe, who may have an aspiration to come back for the third time, will continue to support Prime Minister Suga with Deputy Prime Minister Aso to avoid confusion within the party heading into the Lower House election, amid difficulty handling the COVID-19 crisis and the Tokyo Olympics and Paralympics. Former Policy Research Council Chair Fumio Kishida was badly damaged as Hidenori Nishita, the LDP candidate, whom Mr. Kishida backed as President of LDP Hiroshima, lost in the recent Upper House by-election. As a matter of fact, there is speculation that former Defense Minister Yoshimasa Hayashi might take over the head of the Kishida faction in the near future. Likewise, former Chief Cabinet Secretary Shigeru Ishiba has also lost momentum. He stepped down as head of his faction last October following his last-place finish in the party presidential election. His standing within the party has been greatly reduced.

Lastly, Komeito, the coalition partner for LDP, has been in disarray since Mr. Kiyohiko Toyama, a former Lower House member, resigned in January over a visit to an expensive hostess bar in Ginza despite the COVID-19 state of emergency. Mr. Toyama was widely regarded as a possible successor to Natsuo Yamaguchi as party president. Moreover, Deputy Chairman of Soka Gakkai, Hiroshi Sato, who was a counterpart for Prime Minister Suga, unexpectedly retired in February most likely taking responsibility for Toyama’s actions. The powerful Women Division within Soka Gakkai, the Buddhist Support base for Komeito, was angry with irresponsible actions by Komeito politicians. Incidentally, Soka Gakkai’s election campaign power is on the decline due to aging membership. The goal for the Lower House snap election for Komeito is 8 million votes but the party received less than 7 million in the previous Lower House election.

A consensus among political observers in Japan at this time is that Prime Minister Suga will continue chugging along to be re-elected party president and continue as Prime Minister of Japan. Of course, assumptions are that new COVID-19 cases will be prevented from exploding, the Summer Olympics and Paralympics will be safely held without disaster, and the LDP will maintain a united front going into a snap Lower House election. Needless to say, these are all uncertain assumptions.