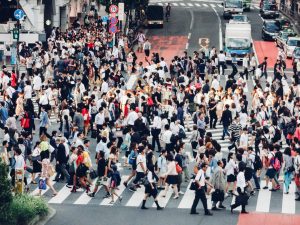 On August 3, Prime Minister Shinzo Abe reshuffled his cabinet and the leadership of his Liberal Democratic Party (LDP), the latest attempt to stabilize his administration after his average net approval fell from +20% at the beginning of June to -22% on August 1. Despite rumors that Abe would draw upon an unproven but popular figure like Shinjiro Koizumi to boost his approval ratings, Abe retained several key ministers (some in new roles) while drawing heavily upon politicians with previous government experiences for new appointees.

Among the 13 new members of the cabinet, seven had served as a minister before at least once, and most had entered the government multiple times. Several, including Foreign Minister Taro Kono, Education Minister Yoshimasa Hayashi, Defense Minister Itsunori Onodera, Justice Minister Yoko Kamikawa, and Economic Revitalization Minister Toshimitsu Motegi had served in Abe’s previous cabinets. By comparison, in the August 2016 reshuffle only two of ten new ministers had previous ministerial experience.

Abe clearly hopes that an experienced team – characterized by the prime minister as a “workmanlike” cabinet – will help restore the public’s trust in Abe after a year characterized by ministerial gaffes and allegations of corruption that tarnished his reputation personally.

At first glance, he may have made the right choice. In public opinion polls conducted after the reshuffle, approval for the cabinet change was 50% in NHK (greatly approve 6% and somewhat approve 44%), 43% in the Asahi Shimbun (compared to 34% disapproval), and 42% in the Nikkei Shimbun (compared to 36% disapproval). Kono’s selection as foreign minister and Seiko Noda’s appointment as internal affairs minister were both viewed favorably. Kono received 53% approval in the Yomiuri Shimbun and 59% approval in NHK (12% strongly approve, 47% moderately approve). Noda, meanwhile, perceived as being “distant” from Abe, received 55% approval in both the Mainichi Shimbun and Yomiuri and 58% in NHK (12% strongly and 46% moderately). Support for Abe’s decision to retain Finance Minister Taro Aso and Chief Cabinet Secretary Yoshihide Suga, key members of his government since he returned to power in December 2012, was more mixed, with Yomiuri’s finding 49% approval compared to 38% disapproval while Mainichi found 40% approval and 47% disapproval.

This cabinet reshuffle resulted in a modest bump in the cabinet’s overall support.

This cabinet reshuffle resulted in a modest bump in the cabinet’s overall support. According to Japan Political Pulse’s ten-day moving average of opinion polls, the reshuffle resulted in a 15-point swing in the Abe cabinet’s net approval rating, from -22% on August 3 to -7% on August 7, after the NHK poll was released. Over that period, average approval rose from 32.5% to 38.7%, while average disapproval fell from 54% to 45.5%. While in two polls – Kyodo and Mainichi – the government’s approval jumped roughly ten points, in the remaining four polls the gains were more modest, ranging from 2% in the Asahi Shimbun (which drew from an especially large sample of 2,153 respondents, more than twice the size of most of the other polls) to 6% in the Yomiuri Shimbun.

But despite approval for the new cabinet as whole, the post-reshuffle polls suggest that not only the public does not expect the reshuffle to have much of an impact, but also Abe’s personal unpopularity continues to grow. For example, in the Mainichi poll, even as the cabinet’s net approval improved from -30% to -12%, only 19% said the reshuffle had raised their expectations of the government.

Meanwhile, various polls found that support for Abe’s serving a third term as LDP president after his term ends in September 2018 is limited. The Mainichi poll found that only 20% supported a third term, another 20% expressed no interest, while 47% preferred someone else. 21% preferred Shigeru Ishiba, onetime cabinet minister and now Abe’s leading critic in the LDP, 11% preferred Fumio Kishida, who moved from the foreign ministry to the LDP’s Policy Research Council in the reshuffle, and 15% prferred someone other than these two politicians. Nikkei and Asahi found similar levels of opposition to Abe’s serving a third term as LDP leadership: Asahi found 30% favored his staying on compared with 52% who opposed it, while Nikkei found 36% in favor and 54% opposed. In Nikkei, support for who should serve as the next prime minister was roughly equivalent to Mainichi’s findings: 17% said Abe, while 22% said Ishiba, and 9% said Kishida. Kishida was tied with Tokyo Governor Yuriko Koike and trailed behind Koizumi, who received 11% support. Other figures polled in the low single digits, including Finance Minister Taro Aso (3%), Chief Cabinet Secretary Yoshihide Suga (1%), new Internal Affairs Minister Seiko Noda (3%), and two aspirants to the leadership of the opposition Democratic Party (DP).

Polls found that support for Abe’s serving a third term as LDP president is limited.

Abe’s unpopularity can largely be attributed to his and his government’s handling of two major scandals: the Kake Gakuen scandal, in which the government is alleged to have helped a school operator run by one of Abe’s friends secure a license to operate a veterinary school, and, more recently, a Ministry of Defense (MOD) scandal in which senior Ground Self-Defense Forces (GSDF) officials, with the complicity of civilian officials, reportedly concealed the existence of the daily logs from the GSDF peacekeeping deployment in South Sudan after claiming they were destroyed. The latter led to the resignation of Defense Minister Tomomi Inada a week before she could be replaced in the reshuffle, while the former guaranteed that several officials implicated in the scandal – including Deputy Chief Cabinet Secretary Koichi Hagiuda and Local Economic Revitalization Minister Kozo Yamamoto – would be replaced in the reshuffle. However, despite Abe’s appearances before recess hearings of Diet committees convened to address the Kake Gakuen scandal in July, Inada’s resignation, and the reshuffle, the public continues to view the government’s handling of both issues unfavorably and continues to hold the prime minister himself responsible.

Regarding the MOD scandal, several polls suggest that the respondents hold Abe responsible and want more clarity. For example, Asahi found that 61% of respondents believe that it is necessary for Inada to testify before the Diet, 73% believe that the Abe administration cannot control the Self-Defense Forces, and 61% think Abe bears responsibility for appointing Inada to MOD post. In Yomiuri, 77% said Inada should have resigned sooner, while in Nikkei, 67% said they were not convinced by the government’s account of the scandal.

Meanwhile, the influence-peddling scandal continues to weigh on the prime minister. In Mainichi, 71% said they did not believe Abe’s claim in the July hearings that he did not know Kake Gakuen had applied to open a veterinary school until its application was approved in January 2017; in Nikkei, 77% said they were unconvinced by the government’s explanation of the process, the same as before Abe’s testimony; in NHK, 78% were either largely (33%) or entirely (45%) unconvinced by Abe’s testimony, while only 15% were either wholly (3%) or somewhat (12%) convinced. The numbers in Yomiuri were virtually identical: only 15% thought Abe’s testimony was sufficient, while 79% do not think it was not. The findings in Asahi were worst of all: only 6% said that Abe’s testimony had removed doubts, while 83% said it had not, and 64% said Kotaro Kake, director of Kake Gakuen, should testify before the Diet.

In other words, despite the relatively positive response to the new cabinet lineup, public dissatisfaction regarding the scandals that led to the plunge in Abe’s approval ratings remains salient. The cabinet reshuffle could have only a short-lived impact on the government’s approval ratings.

The clock is ticking on Abe’s tenure as prime minister.

The clock is ticking on Abe’s tenure as prime minister. Amidst ongoing scandals, the public is increasingly willing to contemplate Abe’s successor. Abe now has just over a year – probably less time in practical terms – to convince the Japanese public and members of his party that he is still a trustworthy, effective leader. Ultimately, Abe’s fate depends not on policies, economic fundamentals, or Japan’s security environment, but rather his ability to undo the impression that he and his government have become “arrogant” and careless after nearly five years in office. If he cannot convincingly address the scandals and offer some evidence that his administration is addressing the root causes that led to misconduct and poor oversight, Abe may soon be a lame-duck prime minister.