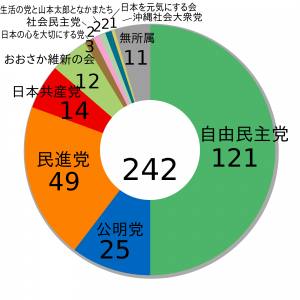 Japan’s House of Councillors (HOC) elections are over, resulting in an impressive victory for the Liberal Democratic Party (LDP)-Komeito coalition, which now has 147 seats in the 242-seat HOC. Additionally, when pro-revisionist lawmakers in the Osaka Ishin party, the Party for Japanese Kokoro, and independents are added to the coalition’s numbers, there is now a supermajority in favor of constitutional revision in the upper house.

However, despite headlines that proclaimed Prime Minister Shinzo Abe’s government won a landslide victory on July 10, opinion polls conducted by the Yomiuri Shimbun, Asahi Shimbun, Mainichi Shimbun, and the Kyodo News wire service after the elections suggest that the vote did not fundamentally alter public opinion regarding the Abe administration and its policies. Voters remain ambivalent about the Abe cabinet, and support stable LDP-Komeito rule for want of better alternatives, rather than enthusiasm for the government.

Nevertheless, the public was generally positive about the results of the election. Yomiuri’s poll found 54% indicated they thought the results were a good outcome, compared with 35% who said it was not. A plurality (44%) was happy with the number of seats the LDP won, compared with 39% who wanted it to win fewer seats and only 10% who wanted it to win more. However, Asahi found less support for the outcome—34% said just right, compared with 40% who said the LDP won too many seats and only 4% who thought it won too few seats.

[perfectpullquote align=”left” cite=”” link=”” color=”” class=”” size=””]The Yomiuri poll suggests that Abe’s support continues to rest on the government’s appeal relative to alternatives rather than on support for Abe himself. [/perfectpullquote]

The public remains divided on Abenomics, the government’s three-pronged economic program. Yomiuri found 44% approval for the program, compared with 42% disapproval, with 14% unable to answer. Kyodo, meanwhile, found that 56% of respondents did not believe that Abenomics would result in better economic conditions going forward, compared with 32% who did (although these figures were actually an improvement from Kyodo’s previous poll, which found 64% pessimistic about Abenomics compared with 26% optimistic).

The public is even more ambivalent about the prospects for constitutional revision. In all polls, the data suggest that voters are conflicted when it comes to a debate on revision. When asked by Kyodo whether the pro-revision two-thirds majority (a two-thirds majority is needed to pass an amendment in both houses of the Diet before it goes to the public decide its fate in a popular referendum) was good, only 24% said it was, compared with 28% who said it was not, and 46% who said they could not say. At the same time, 49% opposed constitutional revision under Abe’s leadership, compared with 36% who favored it. Interestingly, Asahi respondents were less negative about revision under Abe: 35% approved, while only 43% disapproved. A majority (55%) of Asahi respondents actually agreed with the statement that the Diet should begin debating revision beginning this fall, compared with only 29% who said it was not necessary. Similarly, Mainichi’s July 16–17 poll found 51% in favor of proceeding with a debate, with only 32% opposing it. Yomiuri respondents were even more positive about deepening debate in the Diet (although the Yomiuri poll did not specify when the debate should begin): 70% said they hoped debate would intensify, while only 25% did not.

[perfectpullquote align=”right” cite=”” link=”” color=”” class=”” size=””]Asahi found that only 6% wanted constitutional revision to be a priority, well behind those who placed a higher priority on economic policies.[/perfectpullquote]

It is worth noting that support for a broader debate about revision does not necessarily mean that the public backs Abe’s push for revision or that there is broad agreement on what revision should look like. And it is unclear just how deeply thoughts are held about the need for a debate over revision. The most important figure may be that Asahi found that only 6% wanted revision to be a priority, well behind those who placed a higher priority on economic policies.

There is little question that constitutional revision remains deeply polarizing. Mainichi found that among supporters of the government, 72% favored debate about revision while 16% opposed it. Among respondents who did not support the government, 54% opposed a debate on revision. Similarly, more than 70% of self-described LDP supporters and more than half of Komeito supporters favored a revision debate, but more than 60% of Democratic Party (DP) supporters opposed it. Meanwhile, voters were divided over whether Article 9 of the constitution, the peace clause that prohibits Japan from using force to settle disputes and from maintaining “war potential,” should be revised, and if so, how. Asahi found that 39% opposed revision; 38% said it should be revised to clarify the Self-Defense Force’s (SDF) roles and restrictions; and only 8%said it should be revised to upgrade the SDF to a “normal” national military, a proposal included in the LDP’s 2012 draft constitution.

This polling suggests that while there may be a window of opportunity for Abe to guide a revision debate to a successful outcome—as suggested by the willingness of voters to support a debate—public opinion is fluid and the process could be politically difficult.