Abe’s support recovers, but public still has mixed feelings about the government and its policies

The Abe administration’s approval ratings have rebounded in the latest round of polling, regaining much of the ground lost as Prime Minister Shinzo Abe grappled with allegations that he and his wife enabled Moritomo Gakuen, a right-wing educational foundation in Osaka, to purchase public land at a steep discount. While doubts about the land sale remain – for example, in the Yomiuri Shimbun’s April poll, 82% said they were not convinced by the government’s account of the land sale and 63% were not convinced by the prime minister’s claim that neither he nor the first lady intervened on the school’s behalf – the public has largely moved on from the scandal. In nearly every poll this month the government’s approval ratings have risen. In most cases, the gains have been small, well within the margin of error, though in both the Yomiuri and Kyodo News polls, the gains were considerable, four points and six points respectively. (However, the Kyodo gain may be a statistical artifact since the pollster included mobile phones in its random digit dialing for the first time this month.) 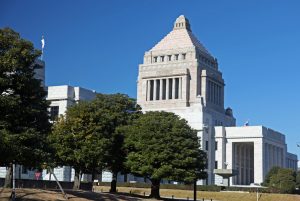 The baseline of Abe’s support continues to be less about support for the prime minister and his agenda and more about a lack of alternatives and, to a certain extent, an appreciation for the government’s stability. For instance, in NHK’s poll, 46% of the government’s supporters said they supported the government because it is “better than other cabinets.” The equivalent numbers in Yomiuri and the Asahi Shimbun were 42% and 50% respectively. The extent to which these numbers are not necessarily seen as a vote of confidence in the Abe government can be seen in a data point in the Kyodo poll. Asked whether they think a recent string of scandals and ill-considered remarks by cabinet ministers is a sign of “slack” in the Abe government, 73% agreed. In other words, the public still has reasons to be dissatisfied with the government’s performance, but the dissatisfaction has not translated into weaker support for the Abe cabinet overall.

On policy issues, the April polling was actually slightly more favorable than in recent months. Polls generally found slight pluralities in support of the government’s anti-conspiracy bill, which is intended to strengthen criminal penalties for involvement in the planning of “serious” crimes, including terrorism. The legislation is one of the government’s major aims for the current Diet session. However, this support is not without complications.

First, this polling appears to have been highly sensitive to wording: while the favorability gap was narrow in the Asahi and Kyodo polls (35% to 33% and 42% to 39% respectively), Yomiuri’s poll found 58% support to 25% opposition for the legislation. The difference appears to be that Yomiuri explicitly referred to the bill as “criminalizing the planning of terrorism,” whereas the other pollsters used more neutral phrasing. That said, in Asahi’s poll, 46% said they were convinced by the government’s explanation that the legislation is necessary to combat terrorism ahead of the 2020 Tokyo Olympics and Paralympics.

59% told Asahi that they were either highly (12%) or somewhat (47%) concerned that the anti-conspiracy legislation would result in more surveillance of the general public.

Second, other questions reveal considerable misgivings about the anti-conspiracy bill. For example, 59% told Asahi that they were either highly (12%) or somewhat (47%) concerned that the anti-conspiracy legislation would result in more surveillance of the general public. Kyodo, meanwhile, found that 51% believe that there is a danger that the legislation could “curtail” the activities of civil society groups and other political organizations. These misgivings – and the relatively large bloc of undecided citizens, as suggested by the Asahi and Kyodo polls – mean that the Abe government is still likely to proceed cautiously with the legislation.

The Abe government may be able to call on more robust support in its North Korea policy. April polls showed that the public is sensitive to the threat posed by North Korea’s burgeoning nuclear arsenal – 93% in Yomiuri and 90% in Asahi said they felt greatly or somewhat threatened – and largely supports the U.S. administration’s recent actions to pressure Pyongyang. Although the wording of their questions differed slightly, 64% in the Yomiuri poll, 59% in the Asahi poll, and 53% in the Kyodo poll supported the Trump administration’s approach. More importantly for the Abe government, 58% of respondents in the Yomiuri poll said they would support the government examining the acquisition of capabilities that would enable Japan to launch military strikes to preempt possible missile launches. That support is probably softer than it appears. When NHK asked a similar question earlier in April but gave respondents the option to answer “I can’t say,” 36% said they approved, 19% said they disapproved, and 34% said they could not say. Meanwhile, the Mainichi Shimbun found that Japanese still largely prefer using diplomacy instead of military means to respond to the North Korean threat: 64% said they supported strengthening diplomatic efforts, compared with 21% who preferred strengthening military pressure on the North Korean regime.