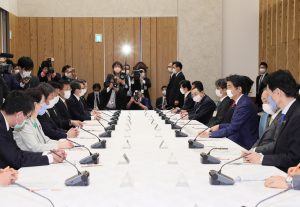 The first case of COVID-19 in Japan was confirmed near Tokyo in early January. It was a Japanese man who became sick with a high fever in Wuhan, China before he returned to Japan on January 6th. He was treated and discharged from the hospital on January 16th. The first Japanese case was confirmed more than a month and a half earlier than the first case, a health care worker was confirmed in New York on March 1st.

While New York has become the world’s epicenter of COVID-19 infections, Japan has been remarkably successful in preventing COVID-19 from rapidly spreading. As of April 22nd, Japan has 11,512 confirmed cases of COVID-19 according to Johns Hopkins Corona Virus Resource Center, whereas New York has 257,246 confirmed cases according to a New York Times database. Moreover, while a total of 15,302 peopled have passed away from COVID-19 in New York as of April 22nd, only 295 people have in Japan.

The situation in Tokyo, the political and economic capital of Japan, is particularly remarkable. The city should be a prime candidate for a COVID-19 hotspot as it’s densely populated and its aging population is greater than that of New York City. It also has a large number of people who have either returned from China or are visiting from China.  However, more than three months after the first case was confirmed in nearby Kanagawa, Tokyo has only 3,439 confirmed cases, compared to the 142,442 cases in New York City.

It’s a mystery how this astonishing feat has been achieved with relatively relaxed restrictions on people’s daily lives, which is due to high political sensitivity to the protection of individual rights and minimizing what was a perceived risk of COVID-19 due to Tokyo Olympics, which had been planned for this summer.

When the FMC’s Congressional Study Group on Japan led by Rep. Diana DeGette (D-CO) and Rep. Buschon (R-IN) visited Japan in mid-February, the delegation members observed a scene of total normalcy. Streets were full of people. Nothing was cancelled.  Everything was as usual except an additional dose of hand sanitizing spray. The delegation was able to hold all the scheduled events including lunches and dinners at restaurants.

Perhaps, prevention of an explosion of COVID-19 so far was possible due to the social norms in Japan of greeting one another without bodily contact, wearing facial masks during the flu season, keeping a relatively high level of general hygiene, and high-quality medical services. However, there is only so much social norms can protect the Japanese populace from COVID-19.

As a matter of fact, Prime Minister Abe’s biggest battle against COVID-19 may have just begun as the situation suddenly began to change in early April. The number of cases has begun to show a quick rise most likely reflecting the relaxed mood and behavior in March, which included a three-day-weekend from March 20th to the 22nd. Tokyo began to have more than 100 cases per day on April 4th roughly two weeks after the long weekend.

Abe declared a state of emergency in seven prefectures, including Tokyo and Osaka, on April 7th in response to a strong plea from the medical community. He was finally forced to declare a month-long state of emergency to the entire nation on April 16th. It was a departure from trying to maintain a precarious balance between preserving economic and social activities while also containing COVID-19. Abe’s priority shifted to suppressing COVID-19 in order to avoid completely shutting down the country.

Abe’s state of emergency declaration allows the prefectural governments to issue instruction to avoid San Mitsu or the “Three Cs” – closed spaces, crowded places, and close-contact settings. However, unlike state governors in the U.S., Japanese prefectural governors can only request, almost in a begging-like fashion, for people to stay-at-home and practice social distancing. They don’t have legal power to enforce measures to reduce human contact by 80%, which is the government’s goal.

In her April 19th article “Tokyo, in a State of Emergency, Yet Still Having Drinks at a Bar” the New York Times Tokyo Bureau Chief, Motoko Rich, wrote with a sense of bewilderment about the normalcy she was seeing in Tokyo. She described seeing Tokyoites “sipping from large beer steins, chatting in non-social distancing proximity” with several other patrons in a restaurant in Roppongi.

In reality, the level of concern has certainly shot up in Japan. Public transportation is less crowded as many commuters work from home. Some restaurants and bars are closed or are doing delivery only. Popular sporting events and theatrical performances have been canceled or postponed. However, these changes are voluntarily introduced, and restrictions are much less stringent when compared to other countries.

Abe and LDP leaders, who are in charge of containing COVID-19, are acutely aware of the threats and are extremely worried. They sent out a strong caution to people to refrain from taking pleasure trips during “Golden Week”, which is the nation’s longest holiday period stretching from the end of April to early May when people move en masse throughout the nation. In addition, political leaders highly encouraged Tokyoites not to venture out to the countryside in an effort to contain the virus in the mega city. Golden Week this year will be crucially important for Abe’s battle with COVID-19.

(This article, which was written on April 22nd, was published in the Association of Former Members of Congress’ “InBrief” on April 27th.)