True Stories from Japan: An exemplary member of the international community 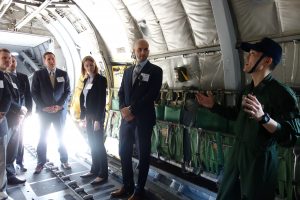 Alexander Alden (pictured, at right) is a Senior Market Analyst with Avascent Group who participated in Sasakawa USA’s Foreign Policy Initiative SEED Trip from October 19 to 23, 2015. Those in the group met with members of the Japanese Diet, media, ministries, Cabinet Secretariat, the National Institute for Defense Studies (NIDS) and the National Security Council as well as representatives of leading corporations and defense industry representatives to discuss developments in U.S.-Japan defense cooperation. Alden wrote this blog reflecting on the trip.

After participating in Sasakawa USA’s Foreign Policy Initiative SEED Trip last year, I’ve come to believe that Japan can play an important role in world politics, far beyond Northeast Asia, as it has a very credible diplomatic voice and significant means at its disposal. Japan has been, by anyone’s measure, an exemplary member of the international community and it derives a lot of legitimacy from this. The question remains as to how Japan’s political culture will evolve to allow the country to play a more active role and to leverage its underlying strengths, but I have an optimistic perspective based on the trends I was able to observe while in Tokyo.

I still remain perplexed and uncertain about Japan’s economic future, but that disposition of mine is a broader concern with the economic vitality of most OECD countries, especially those who have a significantly aging populations and low to negative birthrates.

On the one hand, I’ve come to notice significant cultural restraints and obstacles in the way of Japan’s reform efforts, both domestic and international. On the other hand, it seems to me that Japan’s culture is positively perceived around the world and that it underwrites the country’s soft power and diplomatic legitimacy.