True Stories from Japan: From a college whim to a lifelong passion

Brian Graf is a Research Program Assistant at Sasakawa USA and also involved with JUMP (Japan-U.S. Military Program). He wrote this blog reflecting on the unlikely beginnings of his interest in Japan and how that interest grew to become a defining aspect of his life. 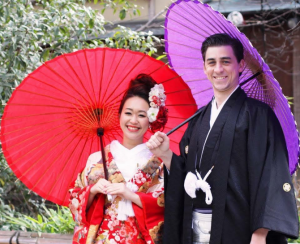 My love of Japan started in a different way than most.

Usually a Japanophile – at least in my own personal experience from talking to people – has taken an interest in the country either through a love of history or culture. Sometimes that fascination may have begun through a fascination with Kurosawa samurai movies, or through a childhood love of coming home from school to watch agonizingly slow-moving episodes of Dragon Ball Z, or through binge-reading the One Piece manga series. Still some others find their way overseas because of military obligations, and upon arriving in Japan wonder what they are doing in such a strange place.

Don’t get me wrong, I’ve daydreamed once or twice about what it would be like to walk around in a hakama with two swords tied around my waist. And I’ll readily admit that Studio Ghibli makes some of my favorite movies. However, my journey was inspired by an entirely different motivation.

It came about because of a Japanese roommate back from my freshman year of college. In an effort to ease the frustration of having to take the required language credits at my university, I decided that choosing Japanese would be a good idea since my roommate, being the amiable guy that he was, would probably not be opposed to helping me with my homework. Not only was I was right about my roommate’s willingness to help, but I also discovered that I actually enjoyed studying Japanese. So it ended up being far less painful for both of us than what was initially anticipated.

Fast forward two years, and it was the beginning of my junior year of university. I hopped on a plane with my two best friends at the time, and set off to study abroad for a year at Kansai University in Osaka. Up until this point, my interest in Japan had been somewhat casual – more reminiscent of a hobby than the passion it would eventually evolve into. Even though I had spent the last two years studying the language, it was my budding wanderlust, more than anything, that seemed to be the main motivating factor in my decision to venture off to Japan that first time.

Even after that first day of trudging through the rain, pulling my ridiculously heavy suitcase up a narrow Japanese road, past small Japanese houses to the dorm that would be my home for the next year, I was hooked.

I remember thinking to myself quite often that year, that every time I walked down the street I must have looked like some version of a manic kid in a candy store. My brain worked overtime to accommodate the sights, sounds and smells, from all the different variations of fish to the Las Vegas casino-style lighting that lined the streets of the entertainment districts and the overwhelming feeling of awe when faced with thousands of years of history and culture while walking through temples in Kyoto.

I’m optimistic about the future of the US-Japan relationship, and I think Sasakawa USA is one of the vehicles that is going to help take that relationship to a new level.

The whole experience broadened me as a person and I was able to acquire new skills – not the least of which was a second language. I formed many friendships, and if I’m being honest, probably a few enemies due to my “outrageous American ways” and my lack of understanding of Japanese cultural norms in certain situations – like the first time I was told that I had a small face and a big nose, which is considered a compliment in Japan. Overall though, the experience left me with a need to return, because I did not feel like I was done with Japan yet. So upon my graduation from university a year later, I returned to Osaka to work.

My five years spent working in the Kansai region provided me with a lot of new experiences. Although I was never required nor expected to work exceptionally long hours, I was introduced to the Japanese work ethic, and the sempai-kohai system, a system of Japanese seniority in which the senior individual (sempai) is responsible for mentoring the junior person (kohai), which is one of the foundations of Japanese society as a whole.

I was constantly challenged by these experiences and, for a while, it was a sink-or-swim type situation. But once I had reached the point of being able to communicate and express myself easily, everyday life was no longer a burden. I found that by reaching this point of assimilation to Japanese culture, I was actually able to enjoy it much more, which only reinforced my interest.

Now I live in Washington, D.C. with my Japanese wife, and I have been afforded amazing opportunities in my life – like the chance to work at Sasakawa USA. It allows me to travel this amazing country of ours and interact with other people who also share an interest or an experience in Japan.

Japan has become a constant in my life. For me, what started as a clever attempt to pass a class has become part of who I am and has informed almost every aspect of how I live my life now. I’m optimistic about the future of the US-Japan relationship, and I think Sasakawa USA is one of the vehicles that is going to help take that relationship to a new level. I’m excited to be a part of it.