Sylvia Luke is the Hawaii State Representative for District 25. She wrote this blog reflecting on her experiences traveling to Japan as part of Sasakawa Peace Foundation USA’s Asian American Leadership Delegation. 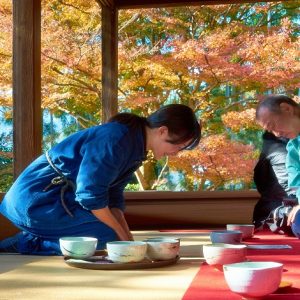 When I first found out that I will be part of the Asian American Leadership Delegation to Japan, I, of course, had a preconceived notion of how the trip would turn out.  What I experienced and learned during my one week visit to Japan far exceeded my expectations.

I would like to thank Irene Hirano Inouye for allowing me to be part of this delegation.  I would also like to thank the Sasakawa Peace Foundation USA for sponsoring this program.  The trip would not have been meaningful without my colleagues, Raj Mukherji, Sharon Tomiko Santos, Hubert Vo, and Donald Wong, whom I now consider my life-long friends.

As I said throughout the trip, it was fitting that the delegation began its visit in Kyoto where we learned about the beauty and spirit of Japan.  You cannot begin to understand Japan without first having an appreciation for its culture and history.  In Kyoto, the delegation experienced the changing of the seasons at Arashiyama garden, and saw first hand the love and dedication that went into creating a Japanese garden.  However, the most meaningful was the visit to the Urasenke center to take part in the traditional tea gathering.  The grace and beauty of the ceremony and the methods and movements used provided serene and peaceful atmosphere.  This was one example of a developed nation recognizing the importance of its traditional cultural roots.

As the delegation moved from Kyoto to Tokyo, we had an opportunity to speak with several policy makers and business leaders.  Expectedly, some conversations barely scratched the surface and we were often met with polite support for the current policies of the Prime Minister.  From the accolades given by numerous people to Prime Minister Abe and his policies, one had to wonder why the Prime Minister had to worry at all about his popularity.  The Prime Minister’s call for a snap election was likewise met with overwhelming support.

One could have mistaken this unfettered support as blind devotion to its leader due to Japan’s highly nationalistic sentiments.  However, conversations with members of the Keizai Doyukai and business leaders such as Mr. Tadashi Yanai, the President of Uniqlo, illustrated a deep understanding of Japan’s people being fully aware of the impending need for globalization of Japan’s economy and willingness to embrace it.  They also recognized that changes put forth by the Prime Minister was slow but was coming.  Prior to arriving in Japan, I believed that it will be difficult for a homogenous society to change according to the demands put forth by Prime Minister Abe due to fear of losing its identity or culture.  To that end, I too came to Japan with my own set of prejudices.  However, what I found in Japan was an acceptance of diversity and willingness to adapt to changes such as transformation in the workforce, despite generations of gender divide.  Now I understand that Japan will adapt to those changes because of its nationalistic sentiments not in spite of it.  Because of its nationalistic positions, Japan will make sacrifices, such as adhering to new tax policies, and embrace the challenges put forth by its visionary leader for the good of the nation.

For all of the above reasons, I left Japan feeling more enlightened as well.